Our project consists of an old wooden barrel, whose top lid is opened/closed with a simple linear actuator. I am a bit afraid that it might crush somebody's fingers while closing.

How could I detect trapped objects effectively?

Elevators often have light barriers, but the problem here is that the opening has a 360° border. Force sensitive resistors seem to be an option too. However, since the border is a circle, I guess applying them would not work too well (folding issues) and look bad on a vintage barrel.

I'm very sorry if I maybe created a duplicate here and I would like to encourage me to provide links to similar questions. I simply couldn't come up with useful search words for my problem.

A physical barrier of some sort would be the best idea, because that is less likely to suffer a failure than an electronic system (well assuming it has been designed right). If you are using an electronic system then it needs to "fail-safe", when it suffers a failure it must adopt its safe state (barrel open).

You could surround the lid with IR lights and receivers in the lip. They would need to be spaced at a distance where an arm/finger couldn't get between the lid and lip without breaking a beam. This solution would only work over the last few inches, because of the angle of the beams. If all receivers had a signal the it would be safe to close. The problem is the receivers would need to be close together to prevent transgression.

The final way I can think of is probably the most effective. As the barrel closes don't close it the last few inches, allow it to 'fall' as the actuator descends. This means if there is an object in there the actuator isn't pulling the lid down and the object will hold the lid against gravity. This would be done by having a channel in the mounting block for the actuator 'pin'/ connection point to slide up and down. 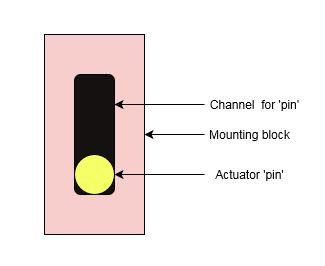 OK Its not an electrical solution.