How can I connect nearly 450 LEDs to an arduino without drawing too much current?

The question seems simple, but there's more to it:

I'm connecting 4 74HC595 shift-registers to an arduino pro micro. 28 of the 32 outputs will be used to control LED segments of numbers. Each segment uses 14-20 LEDs and so I will be using a transistor for each segment. Now here's my problem: With the maximum amount of LEDs activated (at time 08:08), the LEDs will draw nearly 10A. How can I use another transistor to make the shift-registors work with the arduino even though it shouldn't be drawing all current from the arduino, but from an external power source. I have found a suitable adapter from 230V to 5V 12A. The 12A is just to ensure that nothing goes wrong. The LEDs alone will draw 9.76A.

First you should consider changing your whole idea so that your LEDs don't draw nearly 10A.

I am assuming that for each segment you have 14-20 LEDs wired in parallel, each with its own current limiting resistor. That is very wasteful.

Instead you should be grouping the LEDs in chains of series LEDs which you then place in parallel.

Assuming you have normal red LEDs with a forward voltage of around 2V and a typical current draw for maximum brightness of 20mA, you can connect them up in chains of, say, 5 LEDs with one current limiting resistor, and power them from 12V not 5V.

And then you should do away with the resistors as well, and use constant current LED sinks, such as the TLC59116, which can handle the higher input voltage.

If you don't want to do that, then more transistors will be needed: 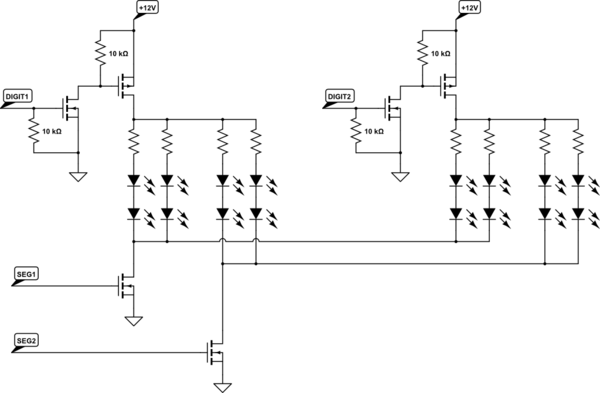 I have only showed 2 digits, 2 segments, 2 chains per segment, and 2 LEDs per chain to save space.

To drive it you need 1 GPIO per segment in one digit and 1 GPIO per digit. So for 4 digits at 7 segments that's 11 GPIO.

Change the 74HC595 to TPIC6B595. Each output can sink 150mA from up to a 50V source. Strings of 3 LEDs in parallel powered from a 12V source (with current limit resistor per string) are easily handled, no extra transistors are needed. The 12V positive goes to the + of each string (the top anode), the - (bottom cathode) goes to the TPIC6B595 output. Here is a video of 8 TPIC6B595s running displays made two strings of 3 LEDs in parallel for the large digits, one string of 3 LEDs for the small digit. https://www.youtube.com/watch?v=6HZ0Mr51jUY Each string draws 25 or so mA. The board that drives the display holds up to 12 shift register chips and is controlled by an Atmega328P set up like an Arduino.

Then to update the display, say you have 4 shift registers all daisy chained:

Dirt simple really. No need for a Mega.

Not the answer you're looking for? Browse other questions tagged led transistor arduino-pro-micro or ask your own question.

0
Arduino on attiny85 driving 4-digit 7-segment using two 74HC595N shift register not alternating fast enough
1
Using an Arduino Nano, how many LEDs can I safely power?
1
How to run 50 IR LEDs off an Arduino UNO?
0
How do I control multiple LEDs strips with Arduino
0
WS2812 - First are white and then they turn red/yellow/orange near the end
2
Can I power my shift register with a 12V external power supply and connect only the data, strobe and clear pins to the Arduino digital pins?
0
What value of resistance to put between the output of a 74hc595 and the LEDs?
1
Solenoid "vibrates" instead of pushing
3
LED not blinking when using a transistor
0
Digital LED clock - matrix circuit question