I'm trying to establish basic communication between python and my arduino due. I have managed to get a message sent to the arduino and sent back, but the code that achieves this task does not give consistent results. I'm running python 3.5 with pyserial 3.3.

These print statements are largely my failed attempt to diagnose the problem. The "garbage" loops were my attempt to make sure conditions were as identical as possible when the python code starts up. If I start the arduino program running and then call this python program from my command line I get inconsistent results. Sometimes my first call to the python "works" and then others won't, sometime it works several times in a row, and that first line out output where it says "The Arduino Says: I" will have a varying amounts of the "I Received: Hello Arduino" message the arduino was supposed to send. Any Ideas what could be causing this lack of consistency? If I try starting the python code first, the arduino can't even start up. 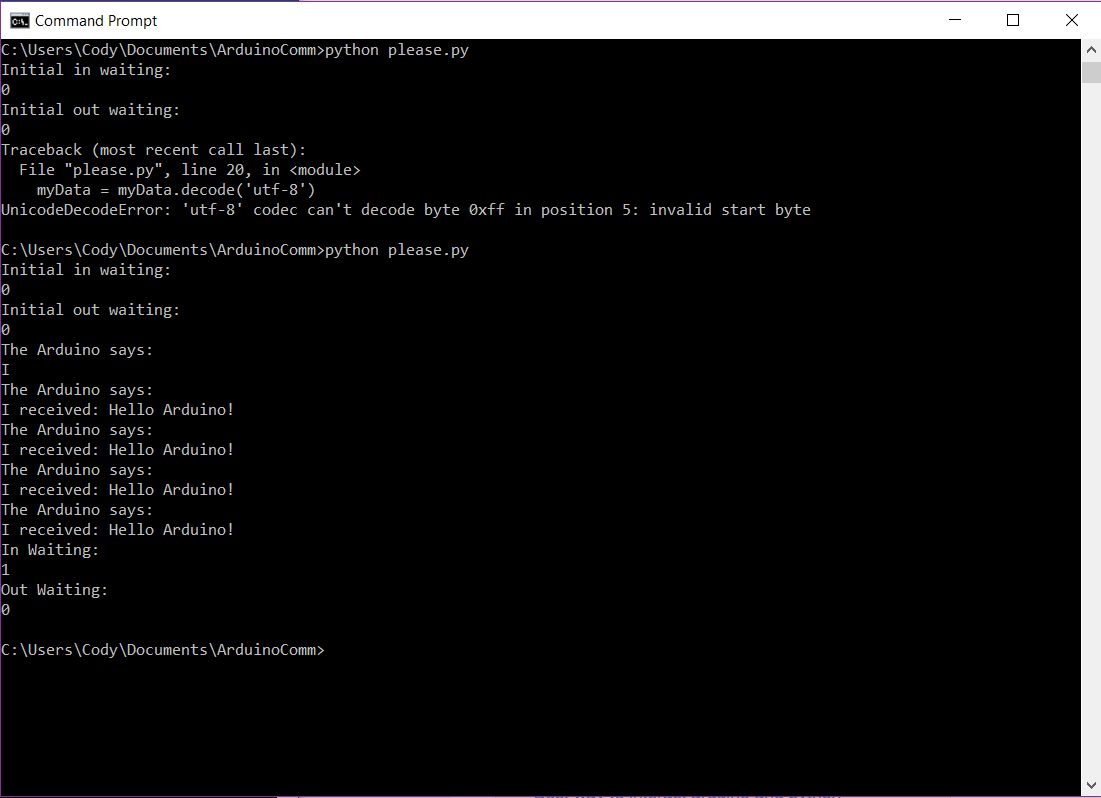 In case other people run into similar issues, I'll lay out what I've found today.

-The inconsistent output was due to the fact that when you open a serial connection with python, it resets the Arduino and so python can send signals without the arduino having finished its setup() function. If I put in a 1 second delay on the python side, inconsistency stops and I no longer run into byte errors at all. I'm looking into alternative means of preventing this reset since the time delay is a deal-breaker for me.

seems to bypass the reset. I included both the setDTR and SetRTS functions here because although setDTR works for DUE, it seems some other Arduino boards need setRTS instead.

-The decode() function has a keyword argument called errors, which can be set to "ignore" if you want the code to just ignore things that can't be interpreted in your desired format. With just this keyword setup, I never got errors but output was inconsistent due to reset.

Arduino being a microcontroller ( not a microprocessor ), is not efficient enough. If noticed carefully, messages sent to the Serial monitor gets overlapped if the time interval between 2 messages is less than half a second !! Also, there is an equal possibility of overlapping of data from Arduino resulting in garbage data !!

These modules also help you to visualize data in the form of graphs as well as filter data and remove garbage values.

Links to their documentation is given below :

The code for all these can be found in Arduino_Master_Delta 's documentation. Not the answer you're looking for? Browse other questions tagged serial arduino-due python or ask your own question.