There are some discrepancies between what is read by the analog channel for a thermistor, ohms values directly obtained on the thermistor using an ohmmeter, and another digital temperature sensor. 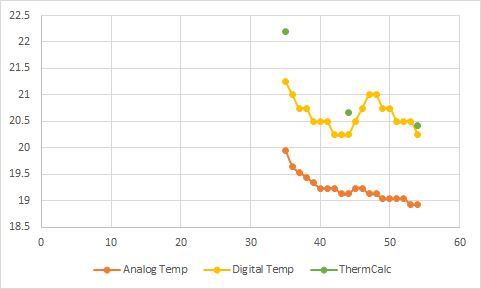 Figure 1: Left column (y axis) is degree Celcius; x axis is time (minutes). Orange is what was read by the analog channel (thermistor); in yellow the reading by a commercial digital sensor; and in green, manual readings of the thermistor using a ohm-meter.

A bit more context, we are building a simple system to read the temperature from a thermistor via an analog channel. Code algorithm is very similar to what is found here and the electronic layout inspired from here. When we ran into problems, we just went back to the working basics as instructed by those two above-mentioned references.

Pad resistor is 7K Ohms @ +/-1%, measured resistance was 6690 ohms Thermistor is 2252 Ohms @ 25 degree Celsius. Coefficients are as follow, coefficient were solved following a calibration in a thermal bath:

Specs from vendor are here (PDF) factory coefficient are about the same. I tried to calculate with either factory and in-house calibrated and there is a few thousandth of a degree of difference between the two - not enough yet to explain the current problem

While investigating I saw some sketch with the same resistance for pad resistor and thermistor, but have seen other differing thus assume this is not an issue.

To troubleshoot and isolate the origin of the discrepancies of the orange line VS other reading, we used

To be clear, green and yellow are what we think is the 'real' temperature; and the orange is the discrepancy. About 1 - 2 degree differences

We used the raw analog value read by the arduino as an input to manually feed and solve the Steinhart–Hart equation (like using IPYTHON and by hand) and output is the same as the orange line. Did the same with the thermistor obtained by the ohm-meter (Green dots on figure).

What should be investigated next to solve the discrepancy between what is read by the analogue channel connected to a thermistor and what the same thermistor provide to the ohm-meter?

One possibility that has not been mentioned yet: the issue may be the calibration of your ADC converter. Your code carries the implicit assumption that the voltage you measure is

The correct formula is

where offset is ideally 0 and scale is ideally 1024 (and not 1023, as you are assuming). Since you are looking at relatively small discrepancies, the “ideal ADC” assumption may not be a good enough. I have calibrated 3 Arduino ADCs and found offsets between 2.2 and 2.4, and scale factors between 1026.1 and 1026.3. Thus, if you have an accuracy issue, I recommend you calibrate your own ADC.

As a side note, you could expect slightly better accuracy if the thermistor and the resistor are closer in resistance. Right now you have a factor 3, which is not that bad, but you could use a 2.2 kΩ resistor, which is a very standard value.

So far I can see nothing wrong.

This is all about accuracy and being precise. That is how to deal with this problem. This is not a quick fix.
For example the resistor value has been: 10k, 7k, 6690 and 6990. That's too sloppy.
I think that you have not told us that the thermistor is at GND (I prefer it being at GND, that's good).

Instead of a short minimalistic calculation you could calculate everything. For example the resistance of the thermistor and the voltage at the analog pin. That would make it easer to check those values with a multimeter.
I prefer to let the Arduino do the calculation, and not trying to be smart and optimize something. Let the compiler to the optimizations.

We have to look further than the thermistor, the Arduino and the sketch.

For now, I think that the problem is between the thermistor and the microcontroller on the Arduino board. Could you try to eliminate any DC offset of the GND and be sure to isolate the thermistor (from metal objects and water)

there seems to be two problems:

1) calibration: the digital sensor / analog sensor may not be calibrated properly - this can account for the gap between the two curves.

2) response time: the digital sensor seems to react much faster than the analog sensor. that could be due to placement, physical attributes (smaller thermal mass for example), ...

Not the answer you're looking for? Browse other questions tagged programming analogread or ask your own question.