Could someone explain this weird looking code, used to setup timers?

While looking at sketches other people have written, I occasionally come across code that looks somewhat like this:

All I know is that is has something to with timing/timers (I think). How can I decipher—and create—code like this? What are TCCR1A, TCCR1B, TCNT1, CS12, TIMSK1, and TOIE1?

This isn't weird looking. It's what normal MCU code actually looks like.

What you have here is an example of the concept of memory-mapped peripherals. Basically, the MCU hardware has special locations in the SRAM address space of the MCU assigned to it. If you write to these addresses, the bits of the byte written to address n control the behaviour of peripheral m.

Basically, certain banks of memory literally have little wires running from the SRAM cell to the hardware. If you write a "1" to this bit in that byte, it sets this SRAM cell to a logical high, which then turns on some portion of the hardware.

If you look into the headers for the MCU, there are great big tables of keyword<->address mappings. This is how things like TCCR1B etc... are resolved at compile time.

This memory-mapping mechanism is extremely broadly used in MCUs. The ATmega MCU in the arduino use it, as do PIC, ARM, MSP430, STM32 and STM8 MCU series, as well as lots of MCUs I'm not immediately familiar with.

Arduino code is the weird stuff, with functions that access the MCU control registers indirectly. While this is somewhat "nicer" looking, it's also much slower, and uses a lot more program space.

The mysterious constants are all described in great detail in the ATmega328P datasheet, which you really should read if you're interested in doing anything more then occationally toggling pins on an arduino.

Select excerpts from the datasheet linked above: 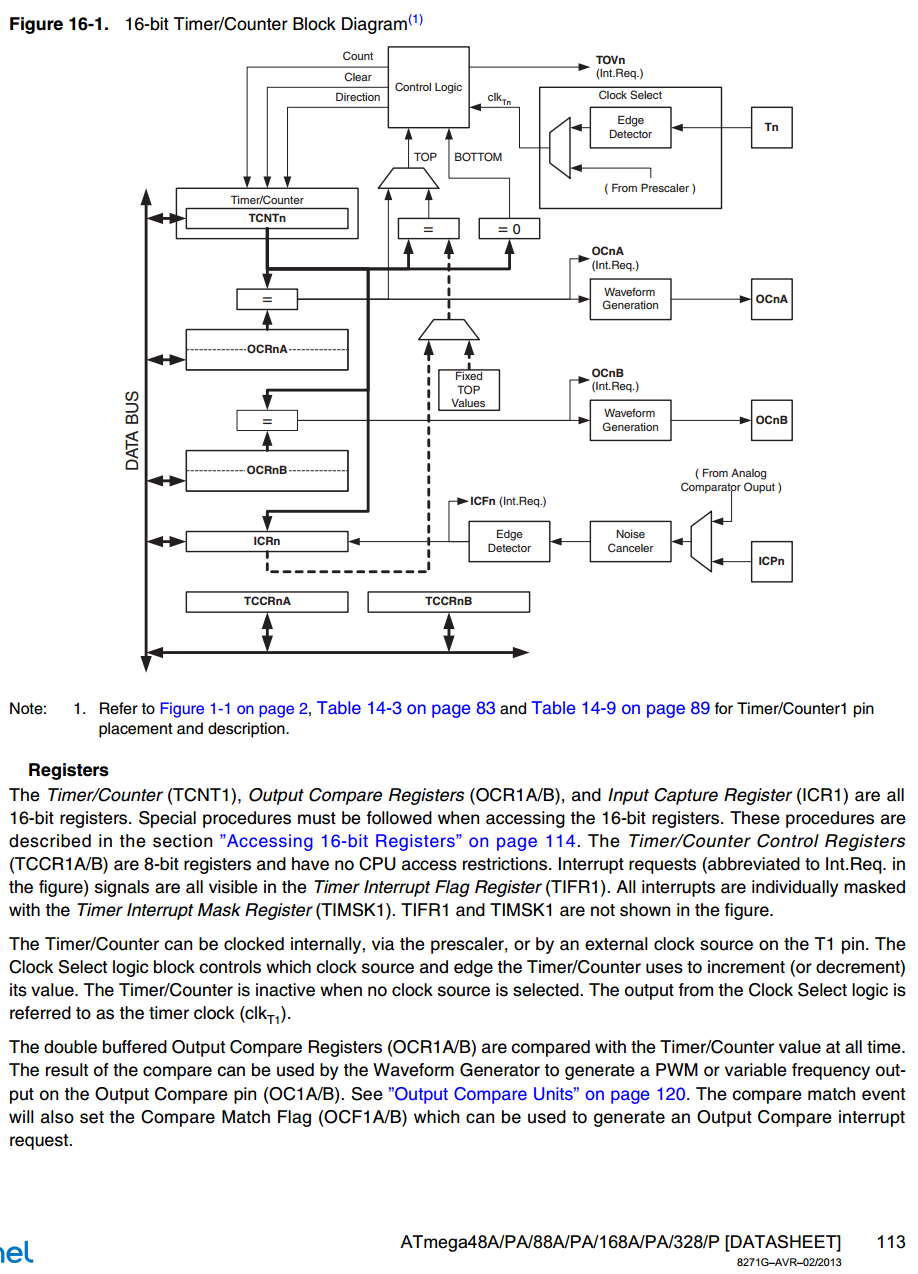 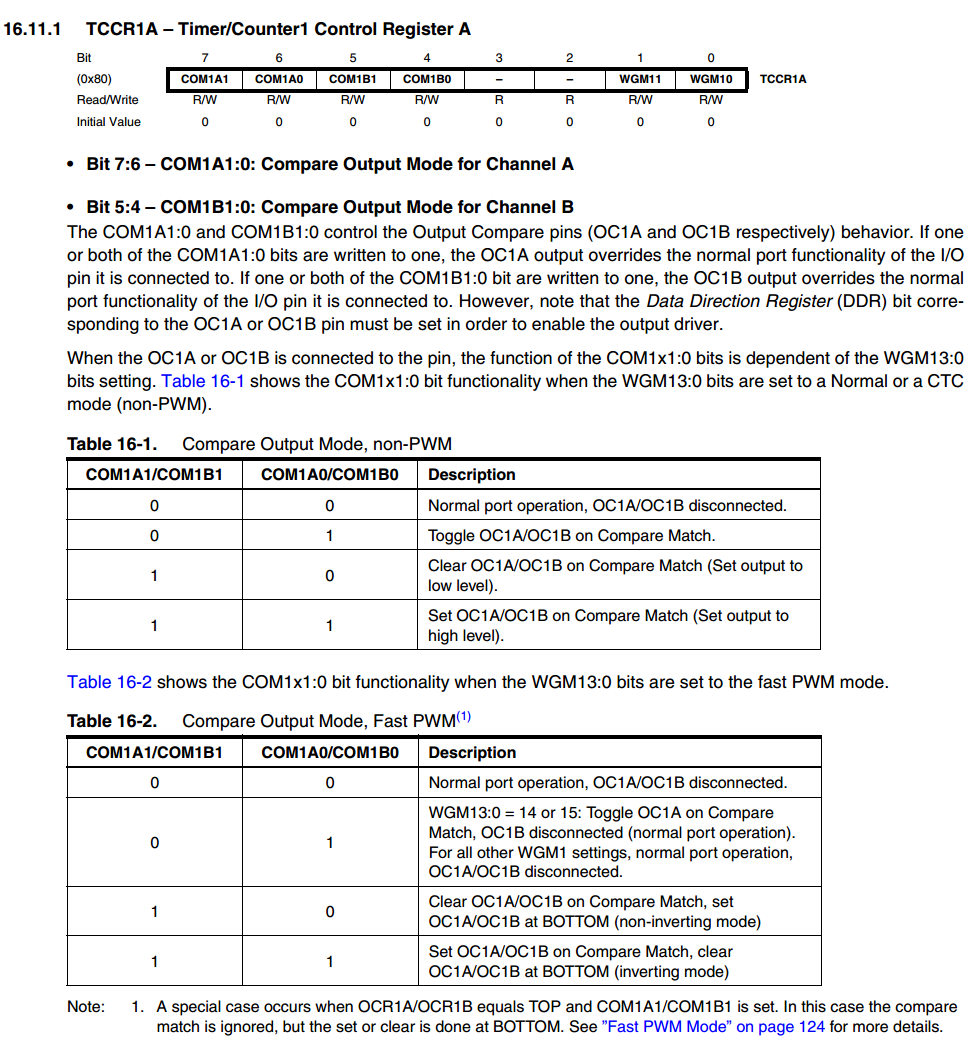 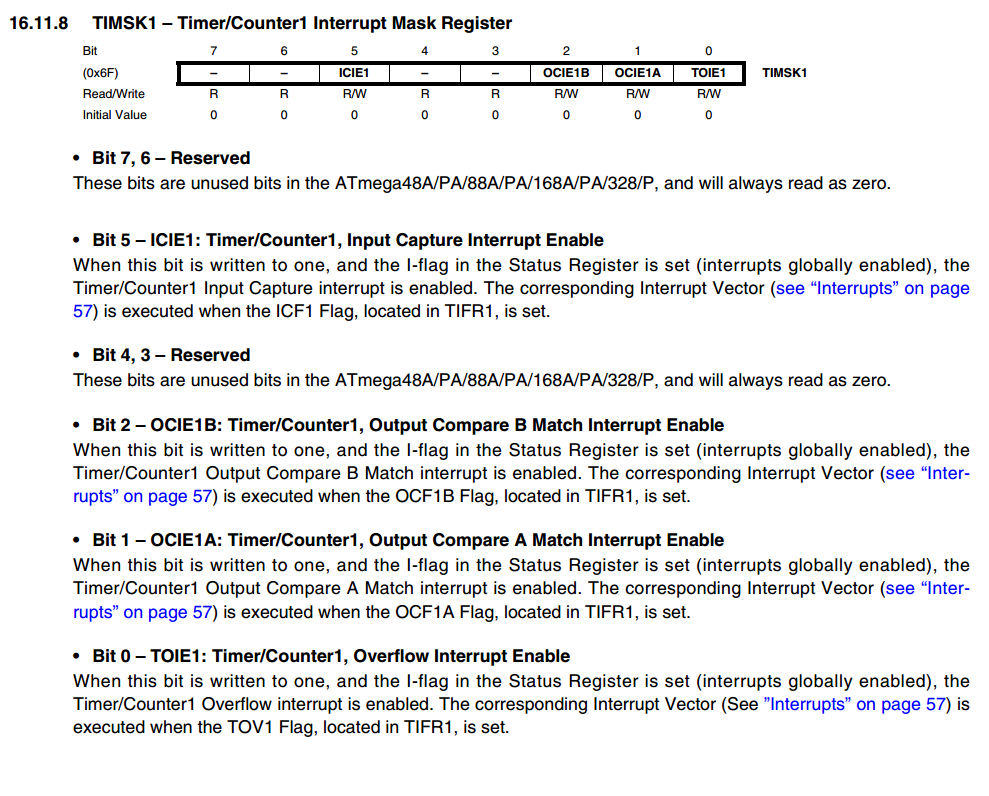 Looking at the documentation for bit 0 of TIMSK1, we can see it is described as

When this bit is written to one, and the I-flag in the Status Register is set (interrupts globally enabled), the Timer/Counter1 Overflow interrupt is enabled. The corresponding Interrupt Vector (See ”Interrupts” on page 57) is executed when the TOV1 Flag, located in TIFR1, is set.

All the other lines should be interpreted in the same manner.

You may also see things like TIMSK1 |= _BV(TOIE1);. _BV() is a commonly used macro originally from the AVR libc implementation. _BV(TOIE1) is functionally identical to (1 << TOIE1), with the benefit of better readability.

Note that in all these cases, the value of things like (1 << TOIE1) or _BV(TOIE1) are fully resolved at compile time, so they functionally reduce to a simple constant, and therefore take no execution time to compute at runtime.

Properly written code will generally have comments inline with the code that detail what the registers being assigned to do. Here is a fairly simple soft-SPI routine I wrote recently:

PORTC is the register that controls the value of output pins within PORTC of the ATmega328P. PINC is the register where the input values of PORTC are available. Fundamentally, things like this are what happen internally when you use the digitalWrite or digitalRead functions. However, there is a look-up operation that converts the arduino "pin numbers" into actual hardware pin numbers, which takes somewhere in the realm of 50 clock cycles. As you can probably guess, if you're trying to go fast, wasting 50 clock cycles on an operation that should only require 1 is a bit ridiculous.

The above function probably takes somewhere in the realm of 100-200 clock cycles to transfer 8 bits. This entails 24 pin-writes, and 8 reads. This is many, many times faster then using the digital{stuff} functions.

TCCR1A is timer/counter 1 control register A

TCCR1B is timer/counter 1 control register B

CS12 is the 3rd clock select bit for timer/counter 1

So, the code enables timer/counter 1 at 62.5 kHz and sets the value to 34286. Then it enable the overflow interrupt so when it reaches 65535, it will trigger the interrupt function, most likely labelled as ISR(timer0_overflow_vect)

CS12 has a value of 2 since it represents bit 2 of the TCCR1B register.

Not the answer you're looking for? Browse other questions tagged timers programming or ask your own question.

3
Arduino timers. How they work
1
Timer to control 1.5V clock
1
Arduino timer ctc mode 4 vs 14
0
Strange issue with FHT library for sound-reactive LED project
2
Using an accelerometer with an Arduino as a shock sensor
0
Proto Threading 2 functions
1
Will this sketch eventually fail because of integer limit issue?
0
How to use any module that has no library for arduino?
1
Timer Interrupt Collision