Detect where pressure is being applied by using force resistors

I have 3 force resistors in a row, on top of which I have placed a board. I read values from the resistors through analogue ports. My goal is to be able to detect whether someone is pressing on the top, middle, or bottom of the board.

So far I can easily detect the left and right, like this: I first calibrate the 3 sensors for 2 seconds. Then I detect if pressure is applied on any of the calibrated sensors. If yes, I sum for all of them the values that they return on each round of the loop, until force has stopped being applied. I finally compare the 3 values against each other and I find which received higher pressure in total. This works perfectly fine for the left and right. However, when the board is pressed in the middle, pressure is applied on all 3, since the board is flat. Sorting the values does not help, because very often the left and right sensors have recorded a higher value than the middle.

I noticed that when the board is pressed on the left, the right sensor records very few values, and the same for the other way around. So, I get a high success rate in detecting middle presses like this:

However, when someone presses hard enough on the left or right, the if statement is satisfied.

Is there a more accurate way to detect where force is being applied?

(Following is a quick schematic I made - I am not at all an expert so please excuse me for my mistakes, I just hope it illustrates more or less what it is supposed to) 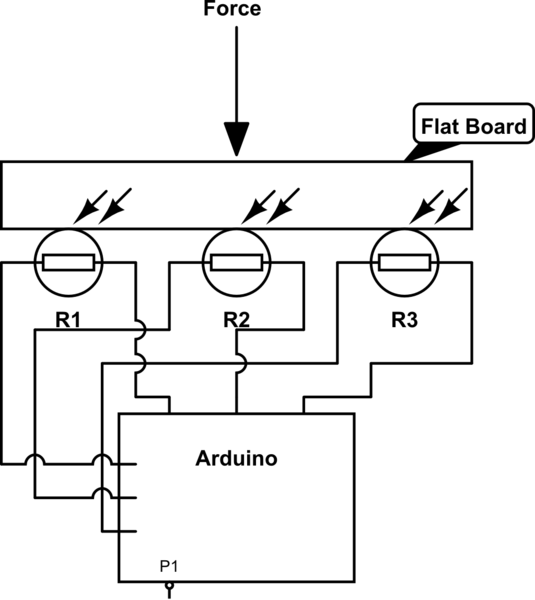 Please ignore the double arrows right on top of the resistors.

Let's assume that you have only two FSR sensors. With those you can make three virtual buttons (above the left sensor, above the right sensor and in the middle).

To measure someone's weight, it is allowed to have a scale under each foot and add both weights. We can use that to calculate the total force pressing to the board, by just adding the two forces.

The FSR sensors have a curve to calculate the force in newtons. It is very inaccurate, but works more or less. That can be added later. For now let's assume that it is linear to the ADC value of the Arduino.

Are the FSR sensors connected to an analog input and GND ? Do you have a resistor between the analog input and 5V ? I assume you do. You need the resistors so that a nice pressing force to the board results somewhere in the middle of the ADC range.

You can start by printing the forces to the serial monitor. Press the board and check if the numbers increase when pressing more.

Don't get confused when you print the position. It will be very noisy when no force to the board is applied. It should be valid when the total force is above the threshold.

For the position I allow a large error of 50 percent left of the left sensor and right of the right sensor. It depends on the mechanical construction and the rest of the code if that makes sense.

Print the results to the serial monitor.
If that is working well, then you have to detect a single press.

Let's assume that as soon as the threshold is reached, a press to a virtual button is accepted. Let's not wait until the peak of the force is reached.
The State Change Detection example can be used to create a single event for pressing the virtual button.

Any jitter or noise (for example a single press to the board results into two events for the virtual button) can be solved by averaging or filtering in software. I think that it will be needed.

I'm not sure if all of this is okay. I hope that someone else will look into it as well.

Is there a more accurate way to detect where force is being applied?

normalize your measurements vs. the static values of those strain gauge readings obtained during calibration.

Not the answer you're looking for? Browse other questions tagged arduino-uno algorithm or ask your own question.