Reading many analog signals in arduino

I need to measure around 50 - 100 analog sensors (resistors). This poses two challenges:

Your question doesn't specify speed, cost, accuracy, or size, and it skimps on electrical and physical details (referring merely to 50–100 resistors and “a lot of cables”) so perhaps can't be properly answered.

ADC's (analog-digital converters) typically are high-impedance devices that measure voltages. A resistor may be measured in many ways, a few of which are:

Anyhow, those comments aside, circuits like the following might do the job. If you have eight analog inputs on your Arduino, you could use up to eight multiplexers to measure up to 128 resistors. 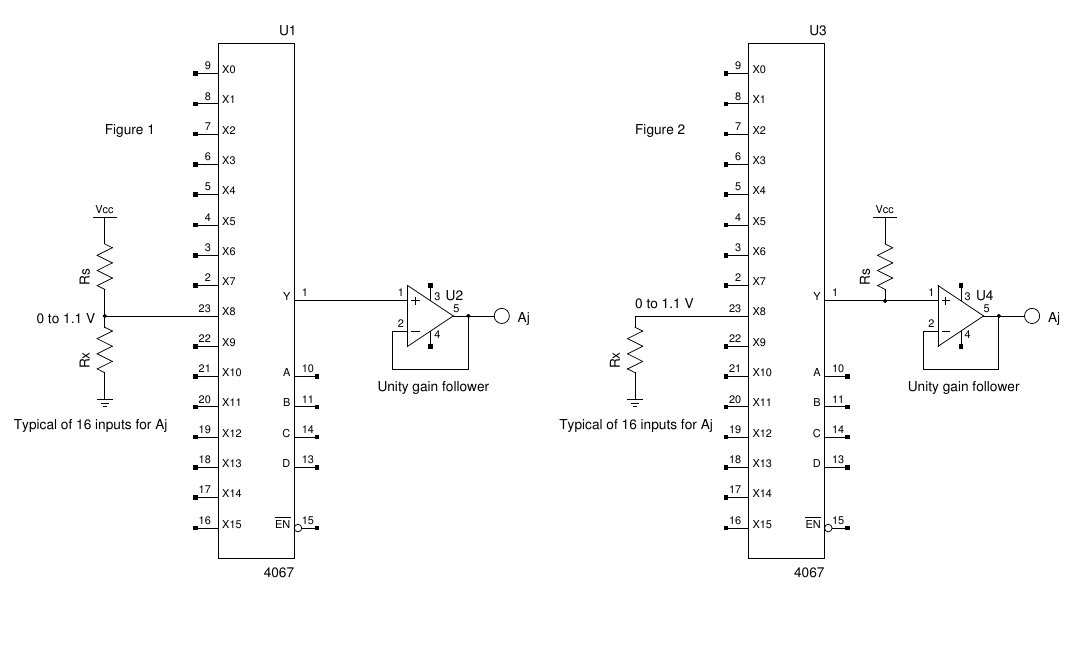 In Figures 1 and 2 above, Rx is a typical unknown resistance, and Rs is a known standard resistor. Both figures represent voltage divider circuits.

Let Rm denote multiplexer transmission gate resistance. Rm is unimportant if the circuit of Figure 1 is used because Rm is tiny compared to the input impedance of a unity-gain follower op amp stage.

Rm might or might not be important if the circuit of Figure 2 is used. (a) If Rm differs somewhat from one multiplexer channel to another, Figure 2 may be unsuitable because calibration will be cumbersome. (b) If Rm is comparable to Rx, Figure 2 is unlikely to produce high-accuracy results.

Whether unity-gain followers are necessary

Whether you need unity-gain followers depends mostly on the size of resistors you are measuring. Arduino analog inputs are high-impedance (10⁸Ω, but with about 14pF capacitance to Vcc/2). Atmel suggests analog source impedances of 10KΩ or less for best results. [See (1,2,3) for additional discussion.] Briefly: If Rs+Rx is likely to exceed 20-40KΩ and you wish to measure quickly, use unity-gain followers.

Let Vt be the voltage at the lower end of Rs in either figure. Vt is the voltage that will be measured at an analog input Aj.

For the circuit in Figure 2, an additional resistance Rm is in series with Rx, so Vt = Vcc·(Rx+Rm)/(Rx+Rm+Rs), whence Rx = Vt·Rs/(Vcc-Vt)-Rm. If Rs and Rx are large (eg 40KΩ and 10KΩ) then ignoring Rm may cause only a fraction of a percent of error. But if Rm is comparable to either of Rs or Rx, either use the circuit of Figure 1 or devote some inputs of each multiplexer to use as calibration inputs.

Unless Rm is a problem (as discussed above) the following advantages of Figure 2 suggest its use:

For either figure, seven or eight wires run from the Arduino to each 4067 subcircuit. One wire from each subcircuit carries Vt back to an analog input. The other wires connect to all subcircuits in parallel: four channel select lines (A, B, C, D in figures, or S0-S4 in datasheets); Vcc; ground; and \EN unless that line is wired to ground. Each 4067 subcircuit should have a bypass capacitor, eg 10-100 nF, from Vcc to ground. Boards like the “Geeetech CD74HC4067 Analog Digital MUX Breakout Board” shown below (about $5 on ebay) might be used, or you could design a custom board and have it made at OSHPark or Seeedstudio. 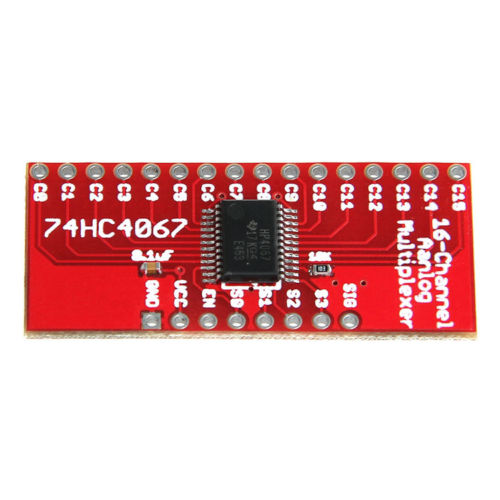 As I read your question I was thinking of the 4067 chip as part of the solution.

You'd rig one 4067 as the anode and another as the cathode on a grid of 64 resistors. You'd then send select an anode channel and a cathode channel, feed +5 volts into the common for the anode channel, and then feed the common from the anode channel into an ADC input on your Arduino. You'd need to allow for the fact that those chips have an internal resistance of around 180 ohms, (at least the TI chip I looked up did. My CMOS cookbook lists 200 ohms resistance.) As long as you're measuring resistances that are substantially bigger than 400 ohms, that should work (or you could precisely measure the resistance of your 4067 chips at your operating temperature and then adjust your math to compensate.)

Mind you you'd have to sample these resistances one at a time, in round-robin fashion. It would be kinda slow.

If you want to test more than 64 resistances, you could use 2 4067s on either the anode side or the cathode side and use the inhibit pin to select the chip. That would give you the ability to sample 128 resistances.

Not the answer you're looking for? Browse other questions tagged pins analogread or ask your own question.

0
Can I measure multiple photoresistors from one pin?

1
analog serial read values are not equal
2
Arduino unstable analog reading when using power supply
0
Analog pins all reading same value
0
Wrong analog reading
3
Reading analog signal from digital pin #6
1
Getting the highest value from analog reading?
2
What is the lowest resistance pot that is useful with an analog input?
0
Ways to add pins in an arduino