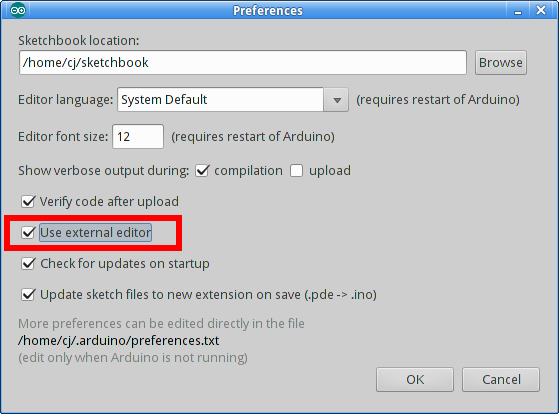 1
Fancy Arduino IDE
0
Arduino write/handle long programs
94
C++ vs. The Arduino Language?
88
How to organize my Arduino projects' structure for easy source control?
13
Is it possible to upload a program from a tablet?
12
Where can I find a central repository of all available Arduino libraries?
12
Writing C Program outside of Arduino IDE?
5
Employing C++ code for Arduino
1
Write your own program to control Arduino Uno
-2
How do I initialize a servo object in my own library?
See more linked questions

3
How does Arduino IDE for mac deal with functions in other files
1
Opening .h and .cpp files from folders other than the sketch folder
1
How to avoid report of unsuitable sketch names?
2
Manual Arduino Due Installation
3
How to use C Libraries for Arduino code
2
How do I configure the Arduino IDE to look for source code in a subdirectory within the directory that holds my sketch?
1
Alternative IDE for compiling and running arduino code?
0
What is the correct folder structure for including local headers in my Arduino project?