How can I know how far a button is pressed?

I want to make a system that can count coins. The problem that I know have is that I need a way to detect the size of the coin.

The idea that I have is a beam that becomes smaller if you a inject a coin. The size of the beam depends than on the size coin. See it as a button that you can press a little bit or very deep.

But how can I know far the button (beam) is pressed?

Following on from Mark's comment, I'm not convinced that you can measure the size of the beam, using a single optical (analogue) device - generally optical switches, like other switches, are binary, either on or off, and as such would use one of the Arduino's digital inputs.

The type of (hypothetical) button that you describe, taking a mechanical analogue (rather than your optical beam example), would require the use of an analogue input pin, and your "switch" would actually be a linear potentiometer, i.e. a slider, or lever, and the analogue input could then measure the input voltage, which would be proportional to the amount that the button (or lever) has been pressed (or moved). However, the usual linear potentiometer is not spring loaded, so the button would not really have the usual expected push button behaviour, unless, of course, you rigged up some sort of spring loaded button, with a long throw, mechanically connected to a linear potentiometer.

An analogue version of this sort of set up, as far as I am aware, does not exist for a optical solution.

What you could use is a series of optical digital (not analogue) switches (or a single light source and a series of receivers), arranged in a line (perpendicular to the base along which the coin is rolled along) in such a way that they can detect the size of the coin*. If the light is broken for a particular detector, then you know that the radius/size/width of the coin is at least the same as that detector's distance from the base. 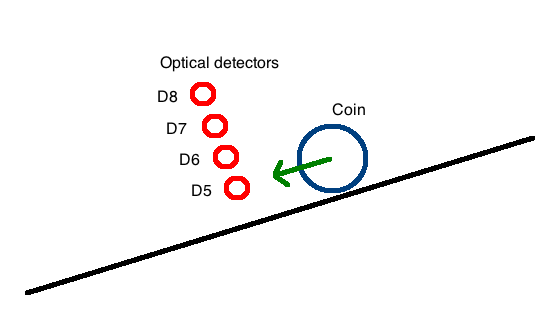 These optical detectors are then connected to a series of digital inputs, i.e. D5, D6, D7 and D8, and a series of if statements would enable your code to determine the size of the coin.

Assuming that the broken light beam results in a low, then the pseudo code would be something like this:

* I have just realised that this is exactly what Jot described in his comment.

2
How to detect if more than one button was pressed
1
Detect how long a push button is being pressed?
0
Button Relay Control
1
use button to select variable
0
Get when a button close the circuit
0
Button to not run script
0
Detect button press inside a for() cycle
1
Button state issue
2
Arduino Timer with increase time button
3
How to make an arduino button to forget his past purpose?