So Im in the planning and research phase of a new project that I want to start for my car. I want to control a bunch of RGB LED strips independently from each other via a micro controller, preferably Arduino of courese, with a breakout board or something. I am going to run this system off the car battery so the current shouldn't be an issue, I hope, but prolonged usage will most likely drain the battery quite quickly. The strips I want to control are of the following lengths:

So I want to be able to control all of them individually as well as the colour and brightness individually. So here are my questions:

Is there a board that the arduino can talk to that has 27 PWM outputs? Can one maybe use normal outputs and just HIGH Low them quickly in sequence and use an arduino MEGA? What would the current draw be if all the colours are on full on all strips? Would it rather be better to blink them in sequence,rather than full on, and lose some brightness to reduce current draw? Could multiplexing here be an alternative to controlling them individually? Maybe get it so I switch all the Positive outs of the LEDs, and the connect the 3 colours together. So in that case I would have 3 + 9 outputs? Would addressable LEDs actually work better?

If you could refer to me to similar projects so I can sniff around there that would be greatly appreciated. So far Im just trying to wrap my head around all the aspects of the project. And yes I know that I wil not be able to use this while Im on public roads, its just for show.... So not sure what the legal aspects there are... :P 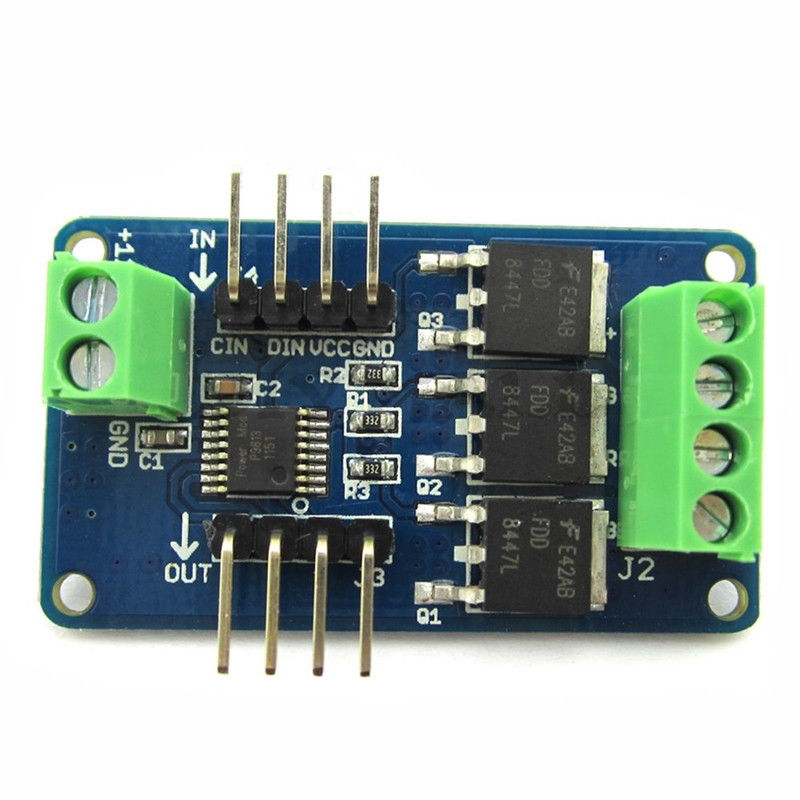 They are based on the P9813 chip and can be used with the FastLed library.
You can find them on Aliexpress or eBay, if you search for "STM32 rgb".

8
Digital RGB LED animation
1
How to power both arduino and 1 color led strip from single power source
0
Light multiple RGB Led Strips from same 3 RGB PWM outputs
2
Arduino and WS2812 RGB LED Strip "freezing"
1
Is it possible to control a 12v led matrix with an arduino?
0
Controlling 4 LED strips
0
Current Draw for LED Projects
1
Do I have to wire up my WS2812 LED strip in "series", if I want to address each LED individually?
2
I'm looking for a way to emulate addressable LED strip using LED diodes in a custom arrangement
1
FastLED-driven strip acts weird when using PN532