I have Arduino Due R3 (84MHz) and I am trying to find the mean of value from AnalogRead. I have to set the sampling rate of 8000 samples/second with 4 channels. I tried using for loop for this purpose.

Will this set sampling rate to 8000 samples/sec ?

Also I was receiving a lot of noise at A0 which often led to the lowest value to be 0. In the image : The red wave is a constant dc voltage of 2.7 V from power supply. 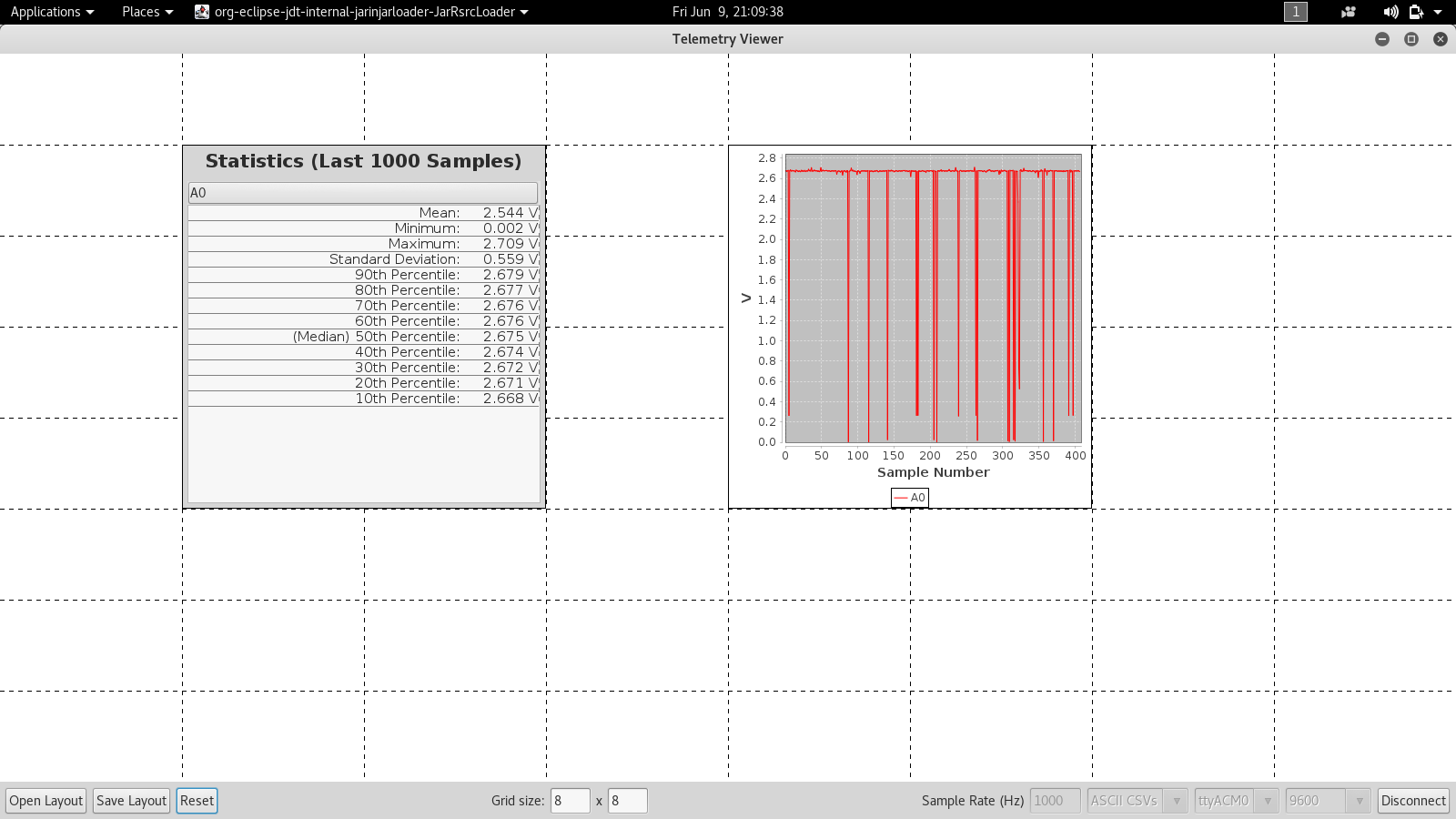 How do I overcome this noise so that mean value is accurate and precise ?

Just to as a complement to Majenko's answer (which I second), there are a couple of flaws in your program that may be related to your problem:

Assuming you really intend to print summary statistics on runs of 8000 samples, as your code suggests, I would write it like this:

Edit: I changed the code in order to keep a roughly constant sampling rate of 8000 samp/s. The main change is that, before taking a reading, we wait until it's time to do so (until micros() - lastTime >= SAMPLE_PERIOD).

Note that lastTime could be updated with lastTime = micros(), in which case it would have hold the time we last took a sample. By updating it with lastTime += SAMPLE_PERIOD it instead holds the time we shoud have taken the last sample. This is the right choice for enforcing a given average sampling rate.

Running on an Uno: I have no experience with the Due, but here are some remarks that would apply to an Uno, or any other AVR-based Arduino:

If I were to do something similar on an Uno, I would forgo analogRead(), configure the ADC to be triggered by a timer, and set the timer to trigger the DC every 125 µs. Not only would this get rid of the jitter, it would also allow the CPU to do its job in parallel with the ADC, instead of just sitting idle and waiting until the ADC is done. This would allow for more complex per-sample processing.

About the Due: As I said, I have no experience with this board. It has a more capable processor, but this tells you nothing about the speed of its ADC. I would expect to face the same issues as with the Uno, though maybe to a lesser degree. I guess it should be possible to trigger the ADC from a timer, but I have no idea how to do so.

Will this set sampling rate to 8000 samples/sec ?

No, that will make it perform a block of 8000 samples as fast as it can. There's absolutely nothing in there that has anything to do with time, so how can "seconds" be included in the description of it?

How do I overcome this noise so that mean value is accurate and precise ?

Not the answer you're looking for? Browse other questions tagged programming arduino-ide arduino-due analog-sampling or ask your own question.