How can I store an image and break it down as shown? Is there no way to do this? I would appreciate any help! Thank you very much!

I am using Arduino IDE for code and I have Arduino Uno/MEGA, which ever is necessary for this task. All info of screen is on adafruit: https://www.adafruit.com/product/376

The below image shows an example of displaying the image: 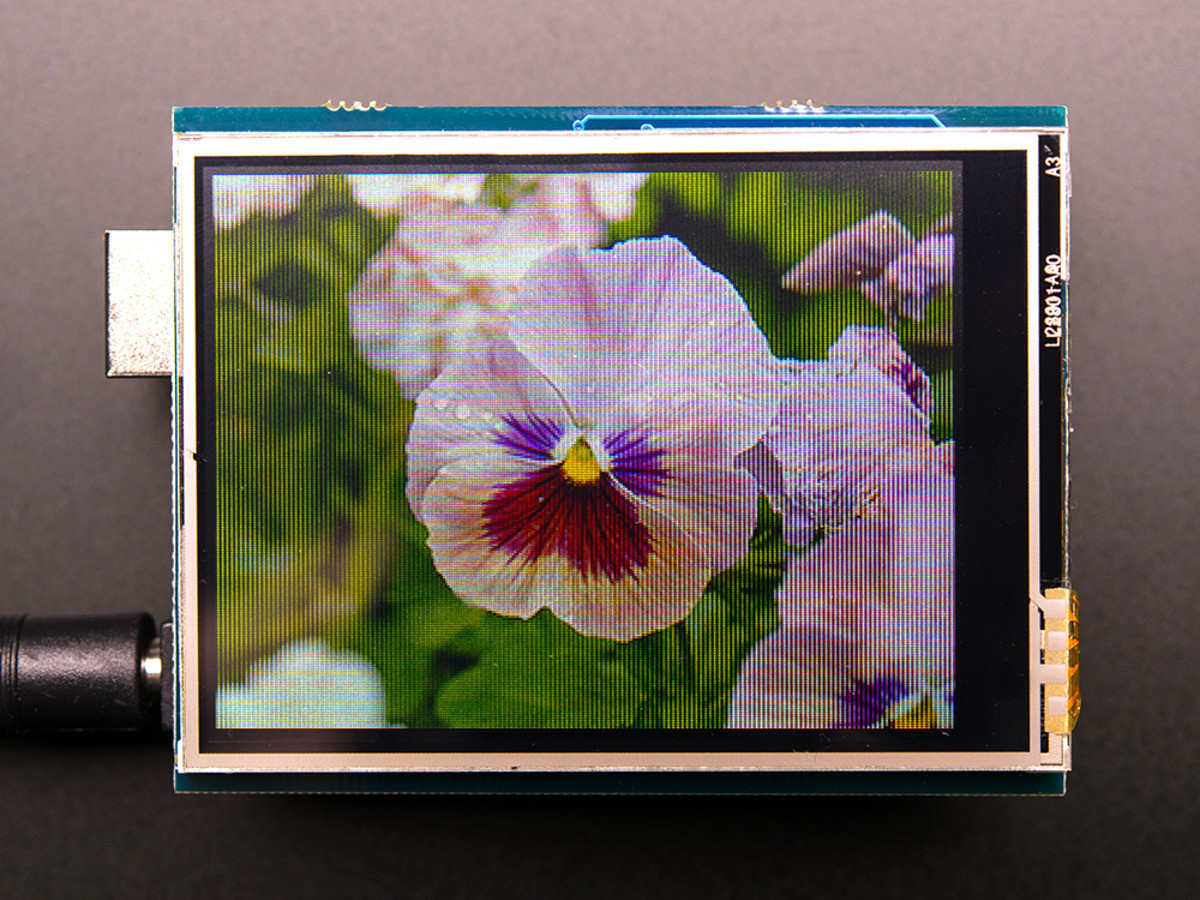 I presume you are trying to create a system that has one image stored, and want the image to be available without needing an SD card reader on the system.

If the logic of your program is small enough to fit into about 18KB of flash memory, you can store one 230KB image in flash on a Mega. (230KB+18KB+8KB = 256KB = Mega flash size. 8KB is Mega bootloader size.) See the PROGMEM page at arduino.cc for examples of declaring and accessing arrays from flash.

In all of these approaches, image data would be brought into RAM row by row or column by column, unpacked, and copied to the RAM buffers in the display.

One could also apply some compression algorithms to the image instead of using BMP format.

If you need more images than one, you could further reduce image quality, for example could save 3-3-2 high bits of color per pixel, or could save only every other pixel in a row or column or both, reducing storage to a half or fourth as much. Or you could have one reasonably good image stored 6-6-4 at 16 bits per pixel, so about 154KB, plus several monochrome images stored one bit per pixel, or about 10KB each.

Edit 1: Re “how would I take an image and convert it into the RGB array?”, one straightforward approach is to write an image-converter program (that runs on your development system) to read an image file and output C code representing the image data in arrays; that is, to produce C-style arrays printed in ASCII. Again, this recommendation is predicated on the notion that you are trying to create a system that has one image stored, and want the image to be available without needing an SD card reader on the system.

I recommend writing the image-converter program in Python. See, for example, the accepted answer at Convert an image to 2D array in python, to which you would need to add a few lines of code to write out C code to a file, so that you could include that code into a sketch. Also see How to get an array from RGB values of a bitmap image? and Working with .bmp files in python 3.

Some C-language examples appear in answers to How to convert a .bmp image into Byte array using C Program and How to convert an image to WORD (uint16) array?, which are among the first links in a stackexchange search for “convert bmp image to array”.

Wikipedia's BMP file format article shows the layout of BMP files in general. Using various image-handling libraries (as recommended in SE questions listed above) sidesteps having to deal with low-level BMP details. However, you may be able to use a simple program or application to produce RGB565 color format files, eg as at Bitmap to RGB565 format on codeguru.com, and then write a simple program to convert that particular form to C-style arrays printed in ASCII.

Maybe you could store the image on an SD card and put it on the screen little piece by little piece, but that is going to be painfully slow.

Not the answer you're looking for? Browse other questions tagged display array or ask your own question.

5
Why bootloader sizes differs from 0.5 to 8 kilo bytes for different boards?

0
problem with using String()
2
Looking for a game application oriented display for Arduino Mega
5
Employing C++ code for Arduino
0
Add string inputs into an array
0
2.8 Touchscreen does not work with Proto Screw Shield
0
Drawing specific RGB on touch screen
0
How to scale a bitmap (uint8_t array) in Arduino?
1
using a switch case with a 5-position switch and serial output
2
ST7789 TFT display only shows a correct image while Arduino reset button is held down - Why?