For a project I need 400-1000 pins controlled by one arduino. Each pin should work similar as arduino pin, so something like 5V, 90mA. Is using dozens of shift registers a good idea? And what power source should I connect? My idea is following: 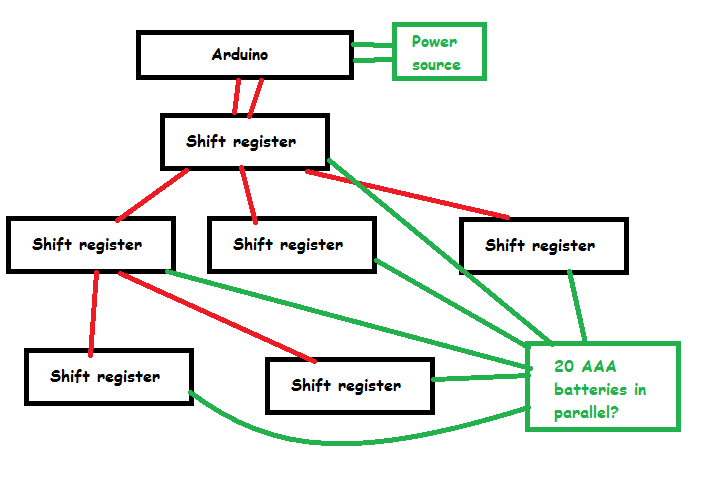 You don't connect shift registers as a tree. That would be awfully slow. Instead, you connect them as chains. Shift registers are meant to be chained by connecting the serial out of one register to the serial in of the next one, while both registers share the latch and clock lines. You can chain as many as you want this way: a chain of four 8-bit shift registers behaves like a single 32-bit shift register. See for example this Arduino tutorial on the 595 to see how the chaining works.

There is an issue, however, in making long chains: whenever you want to change the state of one single output you have to shift the whole chain again. And the longer the chain the longer it takes. Thus it is more efficient to put in a single chain outputs that you will likely want to change together, and use independent chains for outputs that are most likely going to change at different times.

As for the wiring, you need three Arduino pins to drive one chain of registers: data, clock and latch. But you can share the data and latch pins between many chains, as long as you have a dedicated clock pin for each chain. You should then be able to drive n independent chains using n + 2 Arduino outputs.

As for the power, you have to estimate your power consumption (not just the shift registers, but also whatever they are sourcing current into) and find a 5 V power supply big enough to power your whole circuit.

Here is a whole different approach.

Look at how they built the motion-controlled coffee table: 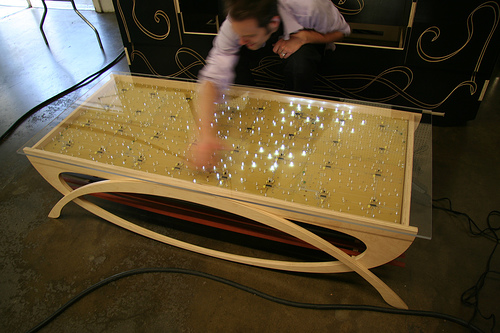 It has hundreds and hundreds of connections, so they subdivided the board so they could have distributed Arduinos.

So it is possible to control that many pins, and it may be best to use multiple Arduinos.

Not the answer you're looking for? Browse other questions tagged pins shift-register or ask your own question.

0
Driving multiple LED arrays with shift registers
1
Is it possible to increase the Arduino's input and output pins?
1
Understanding writing to input pins and pull up resistors
0
Light up more than one LED connected to 74HC595 Shift Register
1
How do I choose proper diodes for a 74HC595 shift register with a wired OR connection?
2
Can I power my shift register with a 12V external power supply and connect only the data, strobe and clear pins to the Arduino digital pins?
1
How can i connect 01 ESP8266 to a shift register?
2
How to control Shift registers output individually bitwise