I'm designing an Arduino style board with built-in LEDs for several of the pins. To simplify assembly of the board and save on components, I was wondering whether it would be safe for those LEDs to share a single resistor, as in this diagram: 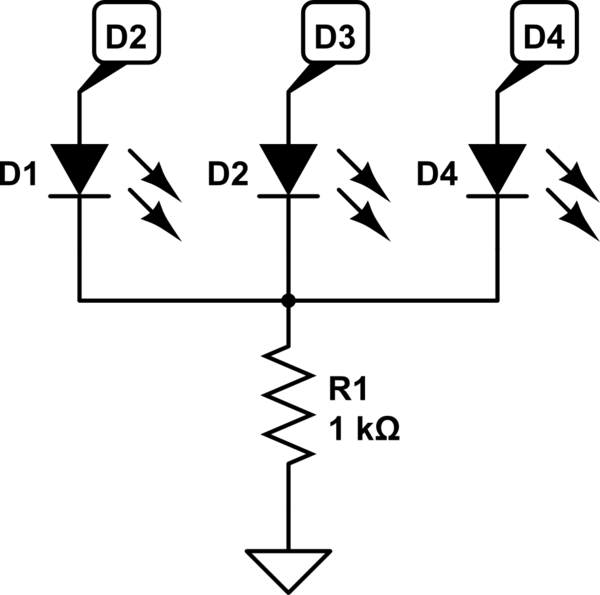 Obviously, the power dissipated through the resistor (3mA per pin @ 3V) is not a real problem. The reason I was hesitating is that LEDs in a parallel configuration should not share resistors, but is it safe to think that separate microcontroller pins don't count as a common anode, even if both pins are high?

Your resistor act here as a current limiter, say to 3mA

As "Amps made LED bright", less Amp is less light. On LED light with that setup will give "full light on", and more LED you add, less would bright each one.

As an edit to that answer, there is one case I might consider that arrangement for "multi-LED lighting". This is if you are multiplexing your LEDs

That is lighting only one at a time, but cycling fast enough from one LED to the next so that the human eye would see them all lit at once.

Your circuit is safe from the electronic viewpoint, so long as the LEDs used can withstand a back-emf of 4v or so.

If only one LED is on at a time, all will be sweet. But if two or more are on, the brightness will drop and the brightness between LEDS will probably be inconsistent. The forward voltage drop of individual LEDS tend to vary a little, so one is likely to hog most of the available current.

A separate resistor per LED is probably best.

1
how to calculate correct resistor value to use with LEDs Potentiometer and other devices?
0
How can I light one led from two different sensors?
1
How can you have two blinking leds and a fading one
2
measure +3V and -3V through resistor divider and switch on/off by digital pins
0
multiple blinking LEDs at different intervals, morse code A included