I am making an LED circuit for a Lobot (from star wars) costume headset that will not be on a PCB or stripboard. It will all be running inside the walls of the plastic shell I am making. Please see Gif of what I am hoping to do:

The LEDs will run through 4 different programs. Here is one program as an example:

I am new to electronics so I am a little nervous about running the ground wire for it. Here is my circuit:

Here is a reworked diagram based on the suggestions i received below: 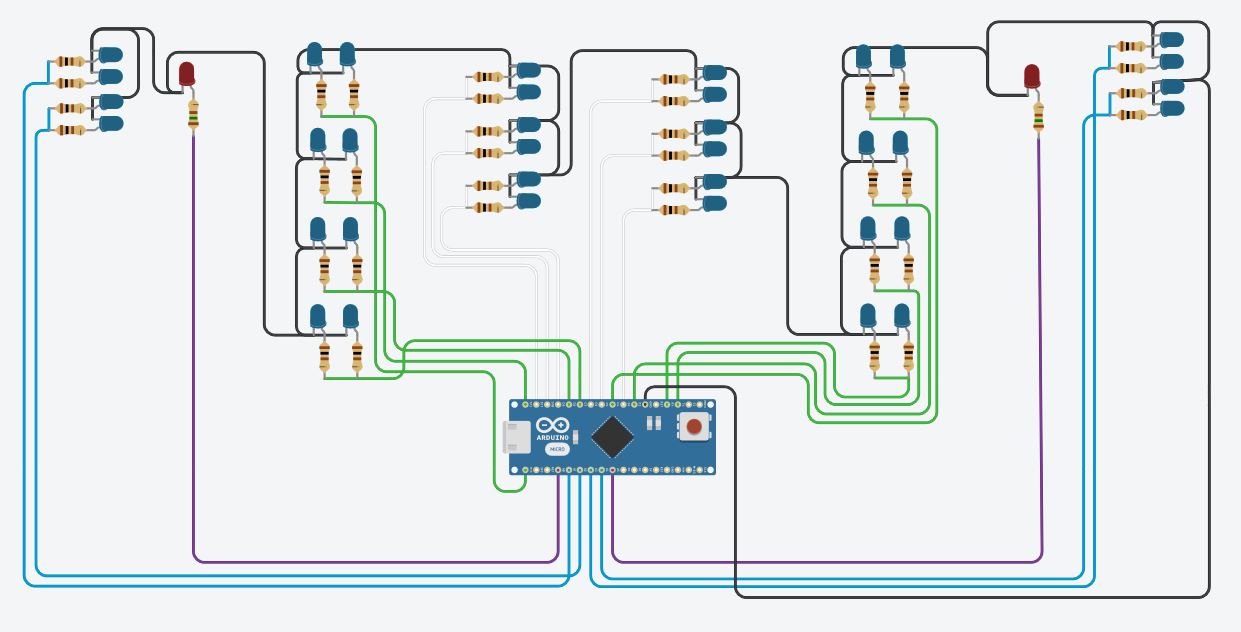 The reds were switched to blue for the simulation but will actually be white. So they are 3v each but running in parallel will need 100ohm.

Now that we have that out of the way, is the ground wire run correctly?

The simulation runs perfectly, but I want to make sure that I am not overlooking something important before I try it on my arduino IRL. Is there a neater way to do this? Google searches availed me not. What is the accepted method for this type of circuit?

The schematics is unfortunately somewhat complicated to read as one has to look at the pinout to understand it. When comparing it to the pinout however I find a few things that are odd, e.g. one of the green wires (top, fourth pin from the right) is connected to GND.

Note that the sum of the forward voltages of the LEDs connected in series need to be (significantly) lower than the supply voltage of the Arduino. This forward voltage is different for differing LEDs (depending on the colour). Blue LEDs have a higher voltage (typically 3.0 - 3.5 volts). Connecting two blue LEDs or some more red LEDs in series leads to a necessary forward voltage higher than what the Arduino can provide.

Be sure to add the current limiting resistor for the LEDs in the appropriate places. Due to the non-linear current-voltage characteristic of (light emitting) diodes those resistors are a must-have (unless driving them with a current source, which the Arduinos GPIO pins are not). Do use one resistor per LED or if LEDs are connected in series. Do not use only one resistor for LEDs wired in parallel. For more details on this topic see here.

Edit to add (revision of question):

Given 3 V forward voltage and 100 Ohm series resistor one LED presumably leads to a current of about 20 mA. But since you intent to drive two LEDs in parallel (so 40 mA) from each pin, you're well out of spec and hitting Absolute Maximum Ratings:

Furthermore you intend to connect 18 pairs of LEDs (give or take the red LEDs). This would be a total current of 720 mA which is significantly above the limits of the microcontroller. Consider that all the current flowing through the LEDs into the GPIO pins also needs to flow to VCC through the controllers power supply lines (just two pins!). Those have limits too:

You need an external driver (such as the ULN2803, as presented in this answer) or transistors.

I am putting all comments here as answer. Micro, Macro, Nano, Uno, Mega... It doesn't matter, all run at 5V. Your schematics won't work.Ghanima is giving you basic, but MUST components. Also i would suggest to use ULN2803 chips. Easy to use transistors. You won't need to calculate resistors for transistors :D

Additional, your arduino will burn in first few seconds, because the current will be to big. you should not drive LEDs from Arduino.

To make it SUPER COOL i would suggest WS2812B LEDs. They need 5V, GND, and Data in. And you can make it any color you want and control all LEDs separately.

Some video about WS2812B

I would strongly recommend it.

Not the answer you're looking for? Browse other questions tagged arduino-nano electricity or ask your own question.