i am unable to make a correct program using the pushbutton to toggle LED on/off?

I want to toggle the the LED on on my first complete click(i.e. pushing and even releasing the pushbutton) and i want to make my LED off at my second click.

This is the program :-

I have connected all the connections on my breadboard according to schematic but there is something wrong in the program itself.

I would use a different approach

We can understand it better if we just take a step by step view. When the controller is started, it first executes the setup(), setting the led pin as output, buttonpin as input and setting the led pin value to low. The led pin is set to LOW because it needs to have an initial value once it is an output. The initial value can also be HIGH without changing the behavior of the circuit. Always remember to set an initial value to all your output pins. This prevent them to float, which may lead no unpredictable results.

The loop() can be a little more tricky.

The first interaction tries the value of buttonpin:if(digitalRead(buttonpin) == HIGH). Once the button is not pressed (buttonpin is LOW), the interpreter moves to the else element. At this element, there is another conditional - i.e, another if. This conditional looks for the value of waspressed. This is false, as set at the begging of the code. Because of this, the information inside the conditional is not executed and the loop() is executed over and over with no change until the button is pressed.

After being released, the first conditional will read buttonpin as LOW, and the interpretor will move the the else element. At that element, it will try the second conditional if(waspressed == true). Until now, there is no difference from what was executed at the first stage, however this time, waspressed is true because it was set true when the button was pressed. This leads the interpreter inside the conditional and execute the lines

The second one set waspressed to false again. With this, the next iteration will be back to stage one and wait for another press on the button.

This appears to be the classic "how to debounce a mechanical button" problem.

Normally a Set Reset or SR Latch is used to debounce mechanical buttons. It is common to use a single poll double throw (break before make) type switch to accomplish this. 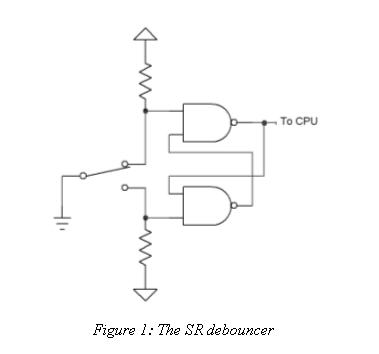 When solving this in software, one needs to create a state machine with 4 states. Two of which are the normally expected ON and OFF state. The other two are the state where we are not sure if the button is pressed or not. As the button is in motion or is "bouncing". These 2 extra states have a time component much longer then the expected time it takes the switch to stop "bouncing". But much shorter then to be noticeable to the operator of the button.

For a really good explanation of using state machines for debouncing switches specifically for an Arduino refer to the "denounce a button using software" link at the top of this answer.

Not the answer you're looking for? Browse other questions tagged led button or ask your own question.

0
Integrating 2 push buttons to toggle the LED ON and OFF
1
Make LED blink using AVR assembly
0
Arduino code to control 4 led's from 4 buttons
1
Using a button to toggle an LED ON/OFF
1
Using a pushbutton to power Arduino on and off
1
changing state of an LED using a pushbutton leads to unstable result
0
Why can't I switch off the LED immediately using this sketch?
3
Red LED not turning off on Adafruit Circuit Playground Classic
2
RGB LED Mode toggle - Trying to avoid using main loop()