I would like to connect 3 L293D Motor controllers to an Arduino Uno with the hopes of powering 6 different dc motors. I was just wondering how to wire this being that one motor controller (which allows for 2 dc motors to be controlled) already takes up most of the pins on the Arduino, thanks.

Below is the wiring diagram for how I am hooking up 1 L293D motor controllers to the Arduino. 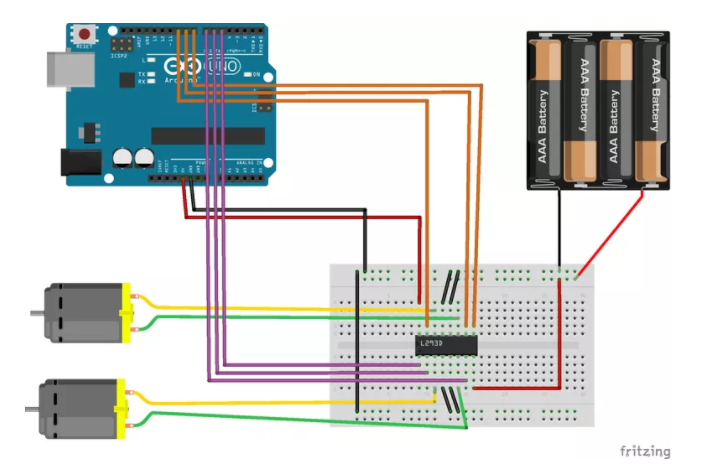 The suggestion of using an Adafruit Motor Shield V2 for Arduino seems fairly good, although that particular shield controls only four DC motors at once. That shield has a dedicated PWM driver chip on it, which removes the overhead of motor and speed control from the MCU. That might allow you to drive four motors via the shield, and two via wires from the Arduino; or, stack two motor shields on the Uno.

If you want to make your own circuit.. then you need two IC 74HCT595(8-bit serial-in, serial or parallel-out shift register). You have to wiring with your arduino and L293D you can go this way.. 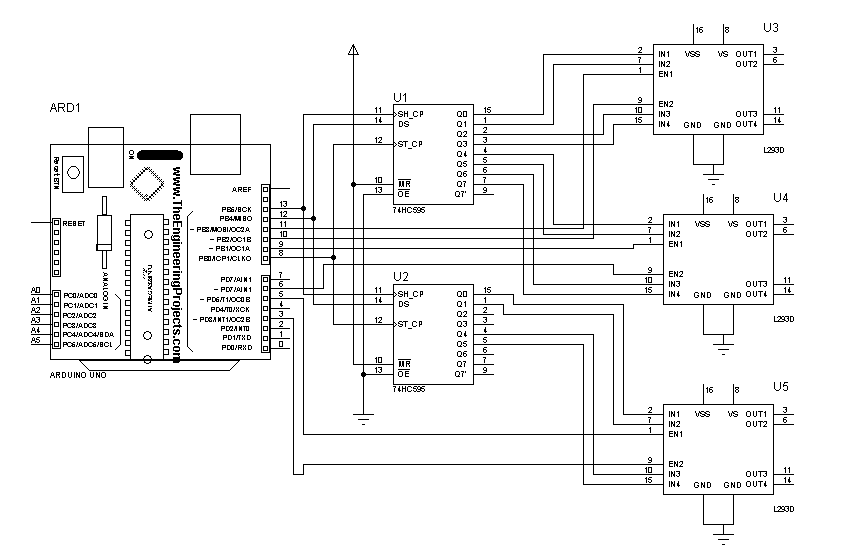 . This Circuit diagram is an Idea, don't think its actual circuit you have to modify this schematic accroding to your application.

Not the answer you're looking for? Browse other questions tagged arduino-uno motor pwm or ask your own question.

7
Control/count rotations of a DC motor
1
Servo motors won't work with motor controller
1
Varying motor speed with the L293D
1
How to connect an L293D and an MPU6050 to run together?
0
Should I control each of the four robot wheel separately or wire two from each side together?
0
Can't make ultrasonic sensor work with motor controller
0
How to Control 2-wire Rotary-Gear Linear Actuator