I started my first try in programming an ATTINY13 with my Arduino 2560.

Everything seemed fine, however when I wanted to run the blink example, my LED did not blink, it keeps lighting.

I am using 5V as input voltage.

I did not change the blink example except for the correct pin number.

All the wiring seems correct, when I change the pin number the LED stays dark, so my program is arriving propperly on the ATTINY.

If I start playing with the delays (delaymicroseconds) I get the LED to become darker.

I was starting with the default blink example (delay(1000)).

I played with both, the normal delay and the delayMicroseconds.

The following codes dimmed the LED:

Which makes me believe the LED is blinking very fast. A similar sketch with normal delay does not make the LED dim:

And as mentioned with the default blink sketch the LED nothing happens as well.

I also made the delay a ever increasing variable to see if something is happening, no luck. And I have 2 ATTINYs to test, same result for both...

Now I moved switching the LED on and off into the setup function. Strangely enough, by changing the delay between 1000 and 100 micro seconds, the LED gets lighter and darker...

Here is my circuit: 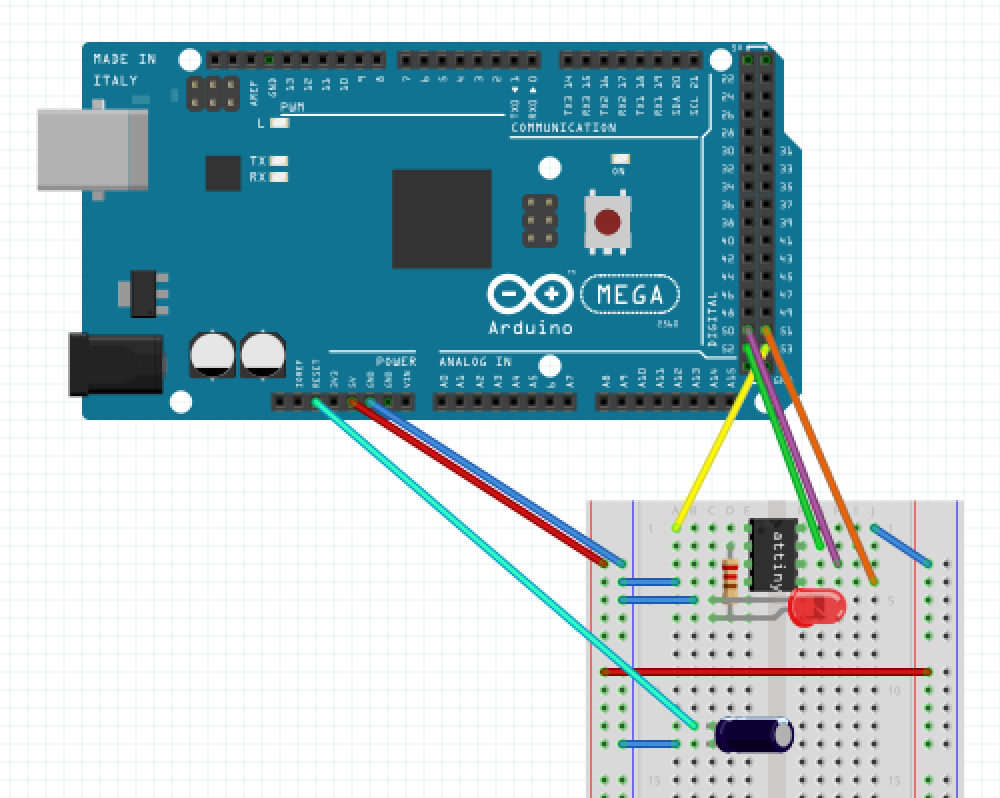 And this is the ATTINY specific code I added to the Arduino IDE:

I don't think it is the reason, as it is totally fine to underclock your chip. In fact, most Arduino boards are underclocked. In fact, the Arduino Uno's chip can do 20MHz, but it is only ran at 16MHz.

As mentioned in the comments, your oscillator might be off. However, it should still blink. If you're saying changing the pin makes it go dark, then some code is running.

My guess is your delay is way to short. You said you were using delayMicroseconds(). Emphasis on microseconds, not milliseconds. (1 second = 1,000 milliseconds; 1 millisecond = 1,000 microseconds) If you meant to be using milliseconds, it is very possible that you are changing the power to the LED at 1,000 times a second, instead of 1. This would make the LED dimmer than directly to power, but it would still appear lit.

Of course, replace the LEDPIN with the right value.

Pin 1 is active low reset. Try connecting it to 5V to run the program.

I switched to a different ATTINY 13 driver and core definition in the Arduino IDE and this made it work.

Unfortunately by playing around I lost track of the old driver.

I am now using smeezkekitty's core13 which I found here: http://elabz.com/arduino-shrunk-how-to-use-attiny13-with-arduino-ide/

Not the answer you're looking for? Browse other questions tagged arduino-mega led attiny or ask your own question.

1
Program ATtiny13 - 20PU
3
Uno pin 13 LED mysteriously always ON at 0.14V unless pinMode OUTPUT
2
Attiny45 resets when setting digitalOutput to low
0
Arduino code to control 4 led's from 4 buttons
2
Arduino Yún as ISP to program Attiny - why is the sketch not working after successful upload?
0
prgramming arduino led on then off
1
Assign and control Digital pin from String