To make an oscilloscope in matlab environment, for data acquisition on arduino side, when inbuilt analogRead() is used, it's working fine, but with very low sampling rate, that aliasing is clearly observed. That too, non-uniform sampling. Thus listing out the drawbacks: 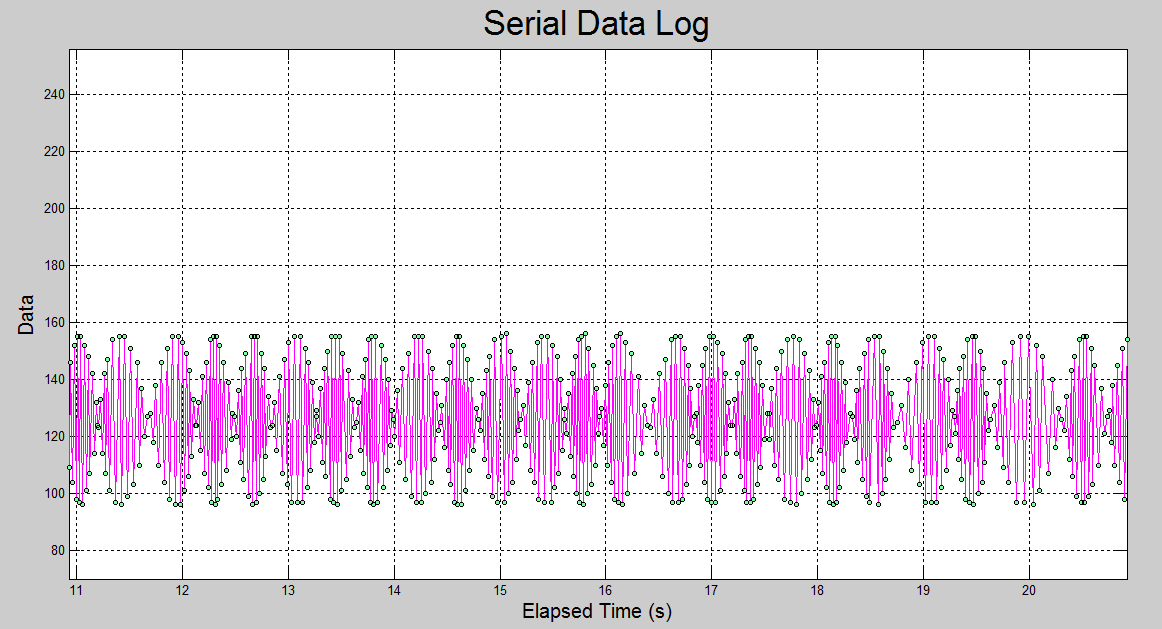 Thus, to overcome above, ADC in free running mode was used, with 16 as prescaling factor, thus 76.9KHz sampling rate (counting each ADC as 13 clock cycles). Thus, data is uniformly sampled now. Also it is quite fast, because of sampling, and is observed. The only problem now exists is, output has a specific noise. The data being sampled is 50Hz sinusoidal current waveform by current sensor ACS712. It overlays instantaneous current waveform over a bias of 2.5V. Thus, when signal is not present, a constant voltage of 2.5V is observed, thus, 512, because of mapping to 255 range.. 127. But in the case of free running mode, along with 127, 191, 63 only are observed. And it can also be seen that nearly 127 = 63*2, and 191 = 63*3. And when current waveform exists, it's highly distorted, but perceptible that it's not the previous signal of just 127, 191, 63. In the below plot, current is passed since 33.5sec.

I am unable to understand this, structured noise. What may be the reason ? I have once read, last two MSB bits get noisy at this sampling rate, but then how would 127, jump to 191. Why is 63 getting added, subtracted at each instant ? I understand the reason for non-uniform sampling now is because of Serial.print(), whose interrupts are obstructing the ADC interrupts, but don't understand the reason behind the noise observed.

Following is the code uploaded in arduino. Serial data is read from matlab by fread() function.

If you use an ISR to retrieve the ADC result, you will need to protect the read of the variable. An interrupt may occur when reading aval in the loop(), as this is a 16-bit value and the read requires several instructions. This may give corrupt values.

It is very unclear what you are trying to achieve here. You are clocking the ADC at its maximum frequency, which has it take one reading every 13 µs, and yet you are delaying for 10 ms after sending one reading through the serial port. So basically your Matlab program is getting one reading out of every 769 you take.

If you want fast data acquisition with a consistent sampling frequency, you basically have two options:

The first option allows for faster sampling rates, but only as short bursts, as limited by the available RAM. Given what you have already written I assume you want continuous acquisition, and thus the second option. I also assume you are using an Arduino Uno or similar.

What I would do here is configure the ADC to be triggered by Timer 1, and have that timer deliver the trigger signal every 1360 CPU cycles exactly. Then,

With the ADC and the UART working at the very same frequency, you keep the UART busy without ever filling the output buffer. If your ADC runs faster than the UART, the buffer will fill out and your timings will get nasty. On the other hand, if you are really confident in your timings, you could skip the Serial managing of that buffer and just do UDR0 = ADCH in the ADC ISR.

Not sure what "structured noise" you are referring to but some advices.

Not the answer you're looking for? Browse other questions tagged serial adc analog-sampling or ask your own question.

2
Arduino Uno ADC behavior in free running mode
3
Using an External ADC with Arduino
0
Due: Write to digital pin when ADC is running
0
ADC noise when sharing ground from external supplies
0
Running ADC triggered by TIMER1_COMPB
0
How to bridge free-running multichannel adc to serial?
0
When does the ADC start reading again in interupt mode?