I'm deploying a small network of three MEGAs connected trough an RS-485 bus. Each MEGA is connected to up to 16 push-buttons (wall-mounted) and two relay-module (2 x 8-SSR; located close to the MEGA). The objective is to manage the lighting of the whole house (aka: "switching 'ON' the relay 'R1' when the push-button 'PB1' is pressed").

At the moment, everything runs fine: MEGAs are able to 'broadcast' events along the BUS and each node is able to properly react to both locally-generated events, as well as events coming from the BUS.

Above system is running from a couple of weeks and... I'm starting struggling about "updating" the code: having around 40 push-buttons and 35 relay distributed on the three nodes, chances are "high" that some "tuning" (aka: "trial-and-error") is required.

Things get even worse when... you start enjoying the powerfullness of the system (aka: "Hai! What about turning-OFF ALL the lights of the main-floor by long-clicking PB1?"). This, obviously, requires a "patch" to the code and a related "upload" the the MEGAs. And so on: LOTS of uploads :-(

Having some ESP8266-12E modules sitting around, I decided to investigate the possibility to use them, as a sort of "WiFi gateway": reaching them via WiFi; sending them the new code; asking them to kindly "upload" the code to its own MEGA that is phisically connected via USART.

As mentioned in lots of places (including a comment on this other question) I decided to test the ESP-Link firmware.

As I'm having problems interconneting the MEGA with the ESP, here I'm, asking this community :-)

As for the Arduino side, I'm using a common MEGA (a Chinese one, BTW), so I don't get into details, here, 'cause there is nothing special.

As for the ESP8266, strictly speaking I'm NOT using a straight ESP8266-12E, but a Development Board. Actually, I'm using a Lolin NodeMCU v3, this, that you can see here below: 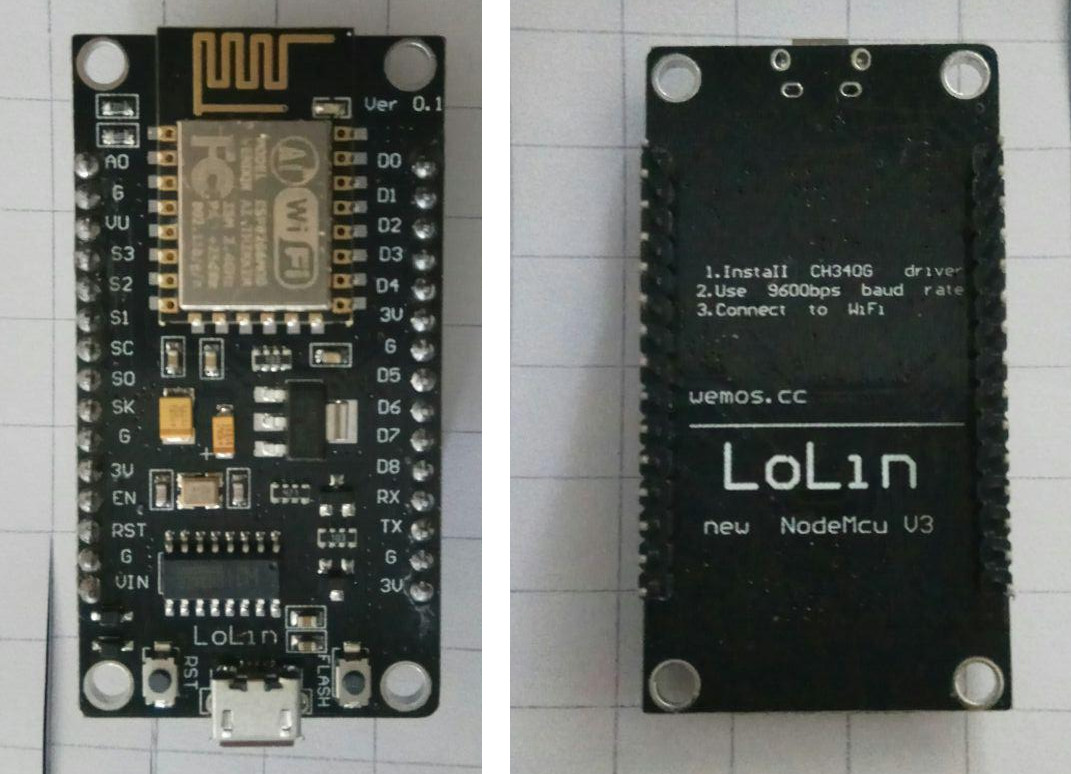 One of the very first issues that I addressed relates to GPIO voltage. While it's crystal clear that:

I still am NOT able to understand if this is --in my case-- a real problem. I'm saying this, 'cause:

1 - Transmission from ESP to MEGA should NOT be an issue, as the HIGH/3.3V signal coming in into MEGA should still be recognized as HIGH, from the MEGA, as it's higher than 2.5V;

2 - Transmission from MEGA to ESP COULD be a problem, if PINs on the ESP are NOT 5V tolerant

As for point 2) I deeply searched all-around and found plenty of contradictory assertions. In the end, I would like to "trust" the Hackaday article: "Ask Hackaday: Is The ESP8266 5V Tolerant?" as, in several comments, reports various semi-official statements (like a message from Expressif CTO sent from a Facebook account or a message from an "internal" of Espressif) asserting that: "Yes! GPIO PINs on the ESP8266-12E are 5V tolerant"). So, again, I decided: "Ok! Let me go! Let's connect the two, straight, without a level-shifter". And yes: I know that with such a decision, I'm taking some risks and... can "burn" something, especially on the ESP side.

Question 1: How much I'm "brave" in connecting straight-away the TX/RX of the ESP8266 to the RX/TX of the MEGA? Would you suggest it? And why?

While working on my RS-485 bus, I learnt that it's critically important to have a "common ground" among my MEGAs. That sounds understandable... as otherwise there is NOT a common reference to evaluate the same signal among different devices.

So, now that I've TWO equipment and I'm giving them POWER via two distinct sources (MEGA directly connected to my PC; ESP connected to another PC), I'm wondering if:

5. RESET line on the MEGA

In order to trigger the flashing of the new sketch on the Arduino side, the ESP need to RESET it. To do this, the ESP need to be connected to the RESET line of the MEGA. The RESET PIN is clearly shown on the MEGA so the connection is really easy.

Nevertheless, after some preliminary test... it looks to me that the ESP is UNABLE to reset the MEGA.

I'm asking also 'cause based on the official documentation of the MEGA I read:

In the official documentation of ESP-Link I read about potential problems generated (to Arduino) by the ESP as, right after a reboot of the ESP, it send out on TX some debug messages. Due to the USART connections, such characters transmitted by the ESP to the MEGA are received by the MEGA. It's not clear, to me, WHY this could be a problem. Anyway, the same documenation say: "...If you need to avoid this, you can configure esp-link to swap the uart pins..."

So, in the end, I connected the two devices following the official doc, with USART PINs swapped:

With help of this mapping I ended with following connection: 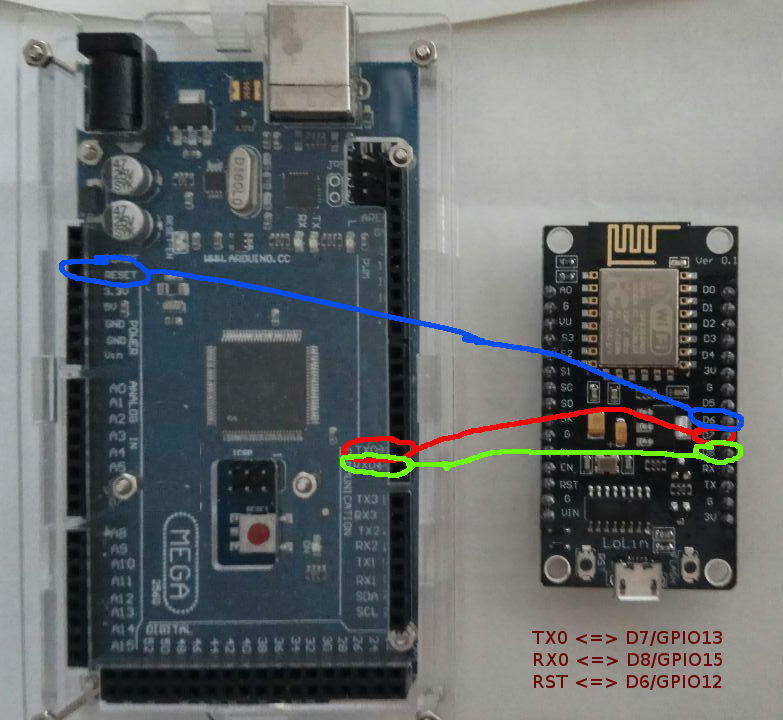 To test what's going on, I've uploaded to Arduino a simple sketch that turn ON/OFF the internal LED every second and dump an increasing counter on the console. Here it is:

so, from the console output, I can see if Arduino is correctly operating and if it's restart.

On the ESP-Link side, I've configured the PIN as shown below: 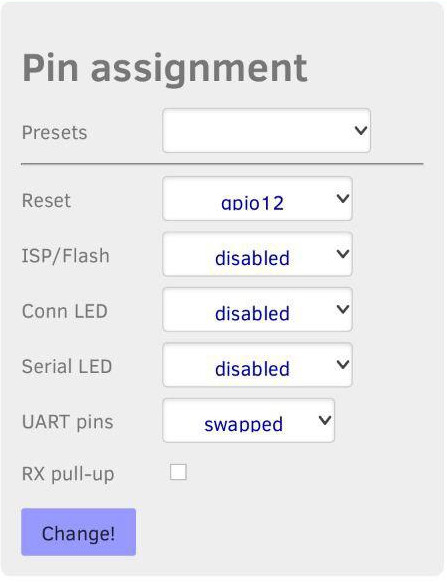 With all the above in place, up to know, I've been experimenting the following:

So, the last question:

Question 4: What's wrong with above testbed? Why the D8/GPIO15/ESP disrupt the boot process on the MEGA? I've swapped the UART PINs exactly to avoid this... as far as I understood...

Sorry to be so long but... I think that details matter :-)

I have successfully used ESP-link firmware with esp-01 and Arduino Pro Mini.

For the ESP-01 and Pro Mini, you can find out more on my blog post. I have connected GPIO 0 of ESP-01 to reset pin of Pro Mini and the Pro Mini can be reset using ESP-Link the web interface. I try to use the same voltage level for both micro-controllers and a single power source. For my example, the Pro Mini is driving the ESP-01 and of-course sharing the common ground.

To answer your questions.

Not the answer you're looking for? Browse other questions tagged arduino-mega esp8266 wireless or ask your own question.

2
Programming an Arduino over the air using an ESP8266

0
Weird characters in Serial Monitor and not functioning ESP8266 ESP-12e
6
How to connect Wi-Fi shield ESP-12E-ESP8266-UART-WIFI-Wireless-Shield with Arduino
2
ESP-12e, Arduino IDE, NeoPixel Strip - Flickering
1
Error while uploading code to ESP8266 through Arduino Mega 2560
0
Problems encountered when trying to program Arduino UNO via esp8266 with ESP-Link
0
How to protect link/url form ESP-12E for controlling LED
0
ESP12E Boot vs SPI
1
I'm getting an error while uploading my code to esp8266 via an arduino (FatalError('Failed to connect to %s: %s' % (self.CHIP_NAME, last_error)))