Arduino community. I have had experience with Arduino for 3 years now and have finally come to the conclusion to get rid of the delay function entirely.

Below is the code to blink two LEDs a complete 10 times. The problem is that the setup() doesn't repeat like a loop(), which means it doesn't last a long enough to find a time difference between PreviousMillis and CurrentMillis because it runs once; thus, defeating the idea of blinking a LED in the setup(). But, I have researched ways to imitate the loop() with while loops; I have used Adafruit's method to spice things up(Constructors and classes!), https://learn.adafruit.com/multi-tasking-the-arduino-part-1/overview.

But I need a little help because it doesn't work, instead, it blinks forever(Mission half-complete =)).

Notice how I have used while loops in the Update(), which is located within the Flasher Class, to mimic a loop() until the condition becomes true.

The problem is, I don't know why this code doesn't work and what to do from here.

The ultimate goal is to blink the LEDs at pin 12 and pin 13 a total of 10 Times, instead of repeatedly blinking for an eternity. I am using an Arduino Uno R3 and a Serial baud rate of 115200.

Ignore what I did in the loop(). It's the same function as the setup() code, instead, the led blinks an eternity (unfortunately), when a value of "1" is typed.

SimpleTimer and similar millis()-based timer libraries are made for just this kind of job. SimpleTimer even allows you to specify a number of repetitions as well. The gist of it is you set a timer to an interval and perhaps a number of repetitions, and a callback function to be called at the end of each interval. Your main code just calls the timer's update function, "run()" in this case, very frequently. Your callback function will be called at the appropriate times. This is one of the easiest ways to implement this kind of job, mimicking foreground/background but without the complexity of interrupts and interrupt service routines.

For such a simple task, the code is very complex.

First, write a piece of code that blinks the LEDs if sufficient passage of time has been met.

You can implement a blink counter, either in the main loop or the blink routine mentioned earlier.

Should be fairly simple.

edit: here is how I would have implemented it.

the code itself is fairly self-explanatory -> the only (marginally) tricky part is how it maintains timing accuracy over a long period of time. in this particular implementation, the test is done inside the led_blinky() routine so it is self-contained -> it does return the number of blinks that have been executed.

Here is the execution of performing 100ms blinks 4 times: 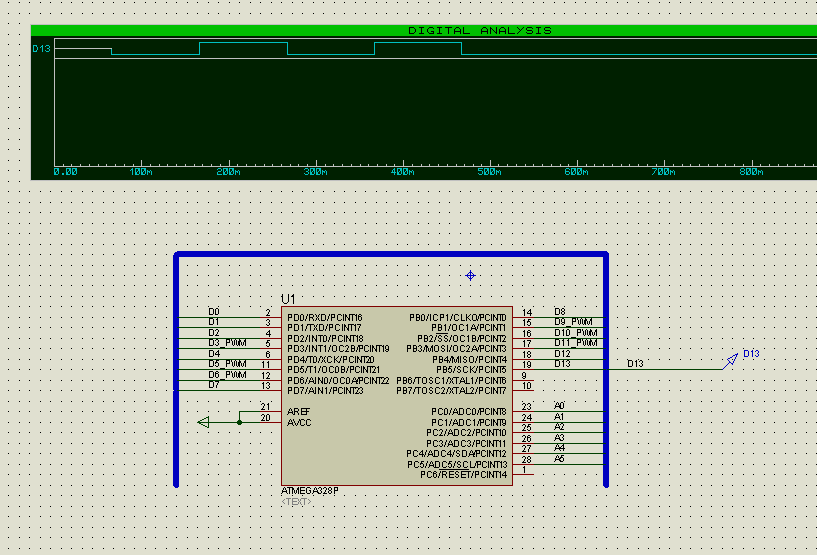 I've modified your sketch so that when you instantiate a LED Flasher object with a 4th argument, it flashes forever. If you instantiate a Flasher object with 3 arguments, use the Start() function to start the LED flashing the number of times you specify. Just call it once, not repeatedly in the loop() function (e.g. when a button is pressed). You can call the Start() function again and specify a different number of flashes. You can have multiple LED flasher objects. Each object can have different on/off times. Some LEDs can flash forever, and some the number of times specified.

I've added a few functions in the class to make it more versatile: Stop(), SetPinHighTime(), SetPinLowTime() and SetFlashForever().

Not the answer you're looking for? Browse other questions tagged arduino-uno code-optimization millis timing or ask your own question.