I am working on a project to control different devices with arduino and IR LED so I am testing with this circuit:

So, everything is working fine but I want to increase range of my transmitter. For now its barely giving response at 1 meter distance. I want to increase this to at least 5 meters. I tried to increase receiver sensitivity by giving 5V to TSOP, when I do this the range is satisfactory but the directivity is too much its even responding when I point IR LED in opposite direction(inside a room, maybe the radiaton is bouncing off walls - this is not happening with 3.3V). I Know the transmitter range can be increased by increasing the current flowing through LED like this (please correct me if I am wrong): 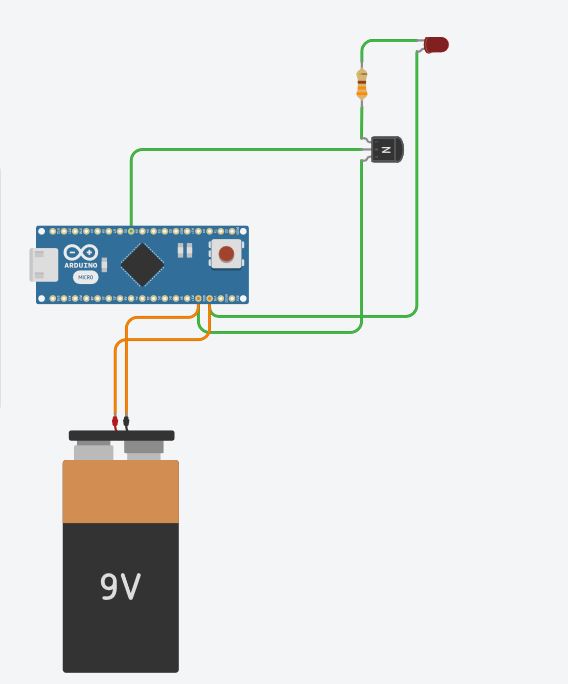 The problem is with directivity of emitter, I do not want all the devices in my room to turn on when I try to turn on my TV. The devices are placed up to 1 meter apart and the transmitting range should be at least 5 meters.

The IR sensors are usually build that way, that they get signal from as wide range as possible, also using walls, ceiling etc. to reflect the signal to receiver - the bussiness logic is simple - user want press buttton and have TV reacting - no trying to hit some particular spot on TV wiht invisible light - it is not shooting game, it is meant as remote switch and if it works regardless actual direction, then the best. To select different devices the transmiter sends different codes - every device in room ideally gets the same input, just the TV "knows" it should react say to range 0xFF0000..0xFF00FF and the radio knows it should react to 0xFF1100..0xFF11FF instead (it is more conplicated and the ranges are not continuous and possibly ovelaps, but it is the principle).

So the best way to difference between your devices is using longer numbers and let the device react just to some selected (specific to that device) and ignore all others.

But if you insist on "shooting it directly to head", then the way is putting both the transmitter diode and the receiver to some kind of tubes (like bore of riffle), so the data could be only send to /get from some small cone of space and communication occures only when those cones are aligned. Anyway it would probabelly react on the reflection from the wall on your back (shooting cone opposite way) as then the cone will get way larger by distance (and so hit more receivers) and also from difraction from particles in the wall (so the wall would light to all directions, not just reflect the cone, as mirror would). And there is nearly nothing to prevent this. (Yes, you can cover the wall with some nonreflective black textile or so, but would you do it?)

As for active part of the receiver, the datasheet say the center of sensiteve area is in the centre of the "diode-like" part, with angle around 80 of sensitivity to both sides vercically and horisontally (with the best sensitivity vaguely straight forward) http://html.alldatasheet.com/html-pdf/26589/VISHAY/TSOP1738/1117/6/TSOP1738.html - but basically it can somehow receive nearly from anywhere on the "diode-like" side.

The back side (flat one) should not be sensitive.

Also you can (and should) use resistor between the pin and transistor base, to limit current from the pin. (transistors have gain like 100 or more, so you need a little current to fully open it).

But as there are much more easily obtained voltage sources, the resistors are use to limit current thru the LEDs as easy "cheat".

You take the voltage of source (say 9V), substract all known voltages around the path (typically 0.7V for transistors, 1.2V for LEDS and so) and suppose the rest is wasted on the resistor. Knowing maximum alloved current for your LED (typically 20mA for "normal one") you compute value of resistor by dividing voltage (in V) by current (in A) to get resitance (in Ohm).

First cheap IR LED I found have typical continuous current 20mA, Absolute Maximum Ratings at Ta=25℃ (room temperature) is current 100mA and Peak Forward Current (1/10 Duty Cycle, 0.1ms Pulse Width) 1A. But those Absolute values are values, where you probabelly will destroy the LED soon, as any temperatue higher (as in summer) moves them down fast. You should read "Absolute Maximum Ratings Values" as "values, which can destroy it randomly any moment, if I get near to them" rather than "manufacturer recomed it for extreme usage". (you cannot make perfect laboratory conditions for any device in normal use).

But if you want to make extra power on the risk of destroying the LED, you can set the resistor as low as 7.1V/0.1A = 71 Ohm or even for short pulses 7.1V/1A=7.1 Ohm, but I would bet, that the LED will burn soon anyway. I myself would risk like 80 Ohm in short pulses, but it does not get as much more light as it get in heat. Consult you datasheet and try only on your own risk.

TLDR: I suggest using unique codes by your Arduino sender for diferent receivers, because you cannot reach you goal other way with good certainlity.

Use your receiver to scan all usual remote controllers you have, then select something totally different for your Arduino receivers.

Not the answer you're looking for? Browse other questions tagged ir or ask your own question.

4
Can I use IR Transmitter/Receiver for heart beat detecting?
0
Why does a light bulb activate an infrared sensor? Is there a way I can filter this out?
1
IR receiver transmitter High frequency
0
How to increase the brightness of a IR transmitter LED?
1
Change range of IR programatically
3
How to connect IR Transmitter and Receiver Module?
7
Using a transistor to get 100mA on a IR led
0
Servo issue, won't go into negative range
1
how to use hx-53 (IR Transmitter Infrared Sensor Module) with ESP32?