Does anybody know if the following MIDI DIN connectors will fit in a breadboard?

(or in general with 'generic' electrical components?)

And the same for:

Diodes to be used for MIDI in. 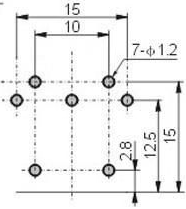 However, those pins are rather large; it's possible that you need to rotate some pins by 90° (with pliers and brute force) to make them fit into your breaboard's holes, or that they do not fit at all. And even if they fit, they can ruin your breadboard. You might need to file them off.

Consider using a panel-mount MIDI jack instead (which would require soldering, or leads with test clips):

The MIDI specification recommends a 1N914 diode, but that is only because it was written over thirty years ago. The 1N4148 is much more common now, and has the same characteristics. But this diode is used only as reverse voltage protection for the optocoupler's LED, so you can use any random fast switching diode.

Not the answer you're looking for? Browse other questions tagged midi or ask your own question.

2
How do I properly receive MIDI with Arduino, with 6n138?

0
Arduino Yun USB host - reading usb MIDI data and passing forward to another device
1
Interfacing an ATtiny85 with MIDI via Software Serial
2
MIDI and DMX together
2
Using a MIDI connector both as MIDI In and Out (not simultaneously)
1
ATtiny85 MIDI IN using SoftwareSerial - Is it possible?
0
Using Teensy 3.5 (Arduino) to produce USB and Hardware MIDI messages simultaneously. Help?
0
Sending MIDI CC to multiple midi Channel
2
Question regarding using Arduino and MIDI