Problem with TIMER in Arduino DUE

I'm writing a code to print/update the value of sensors for each 10 ms, and I decide to use Timer instead of delay function (I'm afraid it's not exactly 10ms with delay function).But when I watch the result on terminal, it stops running at about 0.5s. I guess there is a problem with my code in using Timer because when I remove timer, it prints normally. I debug all day but still cannot find any errors. I guess this is related to memory or pointer or print function.

Here is the code. The code is very long but you can ignore all the unnecessary things:

Here is the result using Timer (stop at about 0.5 second): 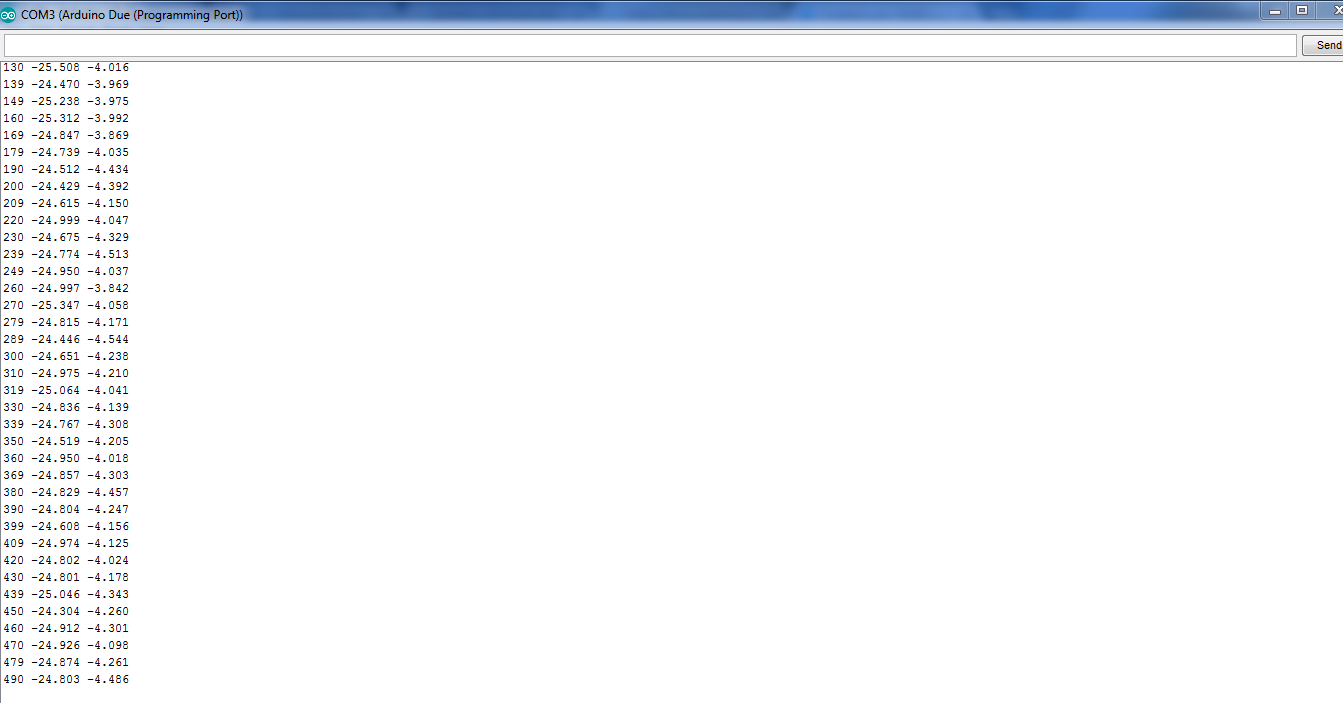 As noted in the last part of Nick Gammon's answer to the question How does the Arduino handle serial buffer overflow?, if the serial output buffer fills up, serial output blocks, waiting for an interrupt telling it it's ok to send the next byte out the serial port. When interrupts are turned off, that interrupt is never processed, so the program deadlocks. Don't do Serial prints in an ISR.

Looking at your code, it looks like a typical message has about 20 characters. Sending at 38400 bps, or 384 characters per second, it seems to me the buffer shouldn't fill, even if it's small (16 bytes) instead of large (64 bytes). However, I don't know of another explanation for the behavior you describe.

In the summary above, I suggested that the ISR store the current time and other relevant data in volatile variables and set a flag in a volatile variable. That is, read millis() and store it, perhaps as follows:

However, looking at your ISR, perhaps it should go like the following instead:

Note that if an interrupt occurs while xf and yf are in the middle of being computed via your Kalman filter or whatever, the statements xfc = xf; and yfc = yf; may pick up partially-stored results. You can avoid that problem at least in part by protecting stores of t1, t2, xf, yf in the main loop:

In the above I've pointed out a few issues with races and concurrency and suggested technical solutions. Those suggestions may be quite wide of the mark rather than appropriate. In general I don't have a precise understanding of what you are trying to do with the software and don't know what redesign should be done to make it coherent.

Not the answer you're looking for? Browse other questions tagged arduino-due timers or ask your own question.

32
How does the Arduino handle serial buffer overflow?

1
Problem with piezo readings and Arduino Due
0
How to use an external clock with the Due timer?
3
Connecting high sampling rate DAC and ADC to arduino DUE, timer consideration
0
Permanent connections with Arduino Due
1
Arduino DUE deadlock problem, watchdog not working
2
Timer Prescaler problem
1
Reduce PWM Frequency Arduino DUE
0
timer library on Arduino DUE