Voltage and Current and Arduino

I put a LED into 3.3V of the arduino and Ground, and it blew my LED violently, smoke was everyone, the whole half top of the led blew up across my room.

However, when i program the arduino with Pin13 HIGH per say, it will not blow up. Will be lit brightly. (Both using no resistors). However, if I plug mroe stuff in the board, for example, a lcd screen, rotary switches, and pushbuttons for my program, the LED dims to such a low brightness I cannot see.

Note, that i am using a mega, and some of it is slightly changed, and LED is being powered from A0 (Or Pin 54 on Mega)

You must use a resistor. See The care and feeding of LEDs

Use a current-limiting resistor.

Current through the LED was so high that a tiny interconnect wire blew up. In typical LEDs, an almost-invisible wire connects from the anode lead frame to the LED chip on the cathode lead frame (at left and right, respectively, on each of the three lead frames pictured below). That wire acted like a fuse and blew up. With such a fine wire, it doesn't take particularly much current to pop it.

The diagram below shows how current through an LED increases exponentially as voltage across it rises. The diagram is from "mikesflightdeck.com LED dimmer" webpage, a page which may be useful in helping you understand why LEDs need series resistors or some other form of current limiting, eg a constant-current circuit. 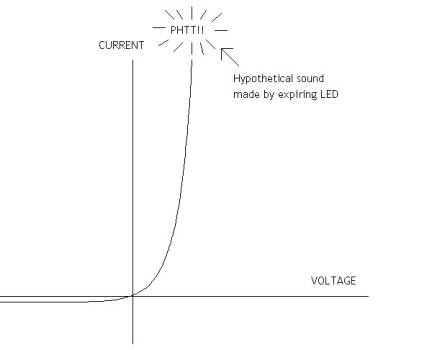 When an LED is powered by an Arduino port output, the port's internal resistance is enough to limit LED current to non-lethal (to the LED) values. (However, the port itself may get burned out by delivering current beyond its 40 mA absolute max current rating.)

The stuff being plugged in apparently is drawing enough current to drop the system voltage. This can happen if your Arduino is powered by a low-power source like a 9-volt transistor-radio battery, or a laptop USB port that can't deliver the 500 mA that a standard USB port is rated at.

If either of those causes is behind the problem, use an external power supply, plugged into the power jack or connected to Vin and Ground. You can buy suitable “wall-warts” online, or at an electronics store, or quite cheaply at second-hand or thrift shops.

But if neither of those causes is the problem, you may have a clone of an Arduino using substandard parts, and unable to deliver reasonable current through its regulators. In this case, find a well-regulated 5 V supply to connect between +5V and Ground or to the USB's power pins. Such supplies are available not only at the aforementioned venues, but also whereever USB phone-chargers are sold, since 5.0 V is what a USB phone-charger should deliver.

Not the answer you're looking for? Browse other questions tagged arduino-uno led voltage-level current or ask your own question.

1
digital pin's current limit, ohm's law and DC motor
0
Measure low current with variable voltage
0
How much current and voltage has my resistor + LED
0
How much voltage/current do I need for multiple chips?
5
ArduinoMEGA: 64 digital inputs cause random digitalRead values
1
How to convert voltage to current from ACS712-20A?
1
Arduino Pro Mini maximal and recommended current per pin
2
Controlling voltage and current from chip?
0
TLC5917 Electrical Characteristics