I posted this on the electrical side of stack exchange and they said it was off topic, so I think it will be on topic here and they confused me even more. So if you guys could clear up my confusion, that would help.I know there are sources for this, but I am still lost. Anyways, here is the run down. I want to control multiple servos (12 of them) using a sensor shield. I need to know what kind of power supply I need. Here is the servo's I am using:

Here is the sensor shield I am using:

The servos run at 3-7.2V and 750ma-1000ma full load or another person said they ran only 100-150ma. Also, another question is do I plug that power supply, when I get the right one according to what you say, into the dc jack or the external power on the sensor shield board?

Thank you for your time.

Arduino.cc forum topic 229646, “Arduino Sensor Shield v5 (APC220) manual”, is a thread about lack of documentation for that shield. However, post #10 in that thread states that pulling off the SEL jumper allows you to use an external power supply to power the devices you attach to the shield. Also see Sensor Shield (Version 5X) Separate 5V for Servos at yourduino.com.

The Robotics Stackexchange question Wiring & driving TowerPro SG90 servos agrees with the 750–1000 mA current draw of SG90 servos. You could go with a 5 or 6 V power supply, with say 12 A rating if you expect to drive 12 servos at the same time. However, as a 12 A supply might be expensive, you probably should attach two or three servos to the shield and measure the current draw. If, for example, your application rarely draws over half an amp per servo, you might scale back to a 10 A or 8 A supply.

Note that an Arduino Uno or Nano (in general, any based on ATmega328-like MCUs) has six pins that support hardware PWM, so you may need to use a Mega instead, or two Uno or Nano Arduinos. (Software-generated PWM signals are another possibility but I doubt it would work well enough if your app is at all complicated.)

Edit 1: If the system is battery operated, you probably should use a 2S LiPo RC battery, that is, a battery with the voltage of two lithium polymer cells in series (so, 7.4 volts) and whatever number of cells you wish to pay for in parallel, as often used in radio controlled devices.

For the SEL jumper, look in the lower left corner of one of the pictures from your amazon.com link, as below. With the jumper (the short-metal-strap-and-black-plastic-shell assembly, next to the letters SEL) removed, connect battery+ and battery- to the screw-down terminals at bottom left in the photo. Battery+ goes to Vcc, battery- to Gnd. 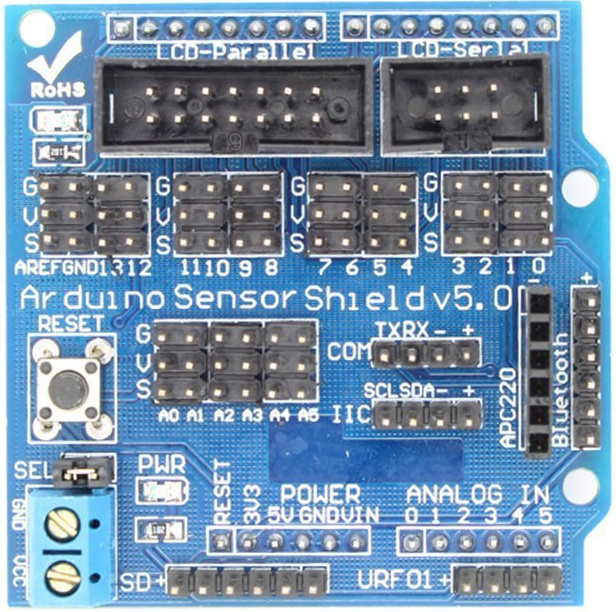 Regarding a second Arduino, you could split the processing across two of them so that each one only needs to know the current time; or could communicate between them by an SPI, I2C, or RS232 interface; or could move up to a Mega2560 Arduino, which has a lot more PWM channels.

Addicore.com has some useful current measurements for the SG90:

However, you probably need to make current measurements on your own to see how big the battery needs to be.

so if you combine the two attributes together, it is easy to control multiple servos with from one timer interrupts.

I wrote a few pages on this recently: 1. driving multiple servos on AVR Timer2: https://dannyelectronics.wordpress.com/2017/02/08/driving-multiple-servos-with-avr-timer2/ 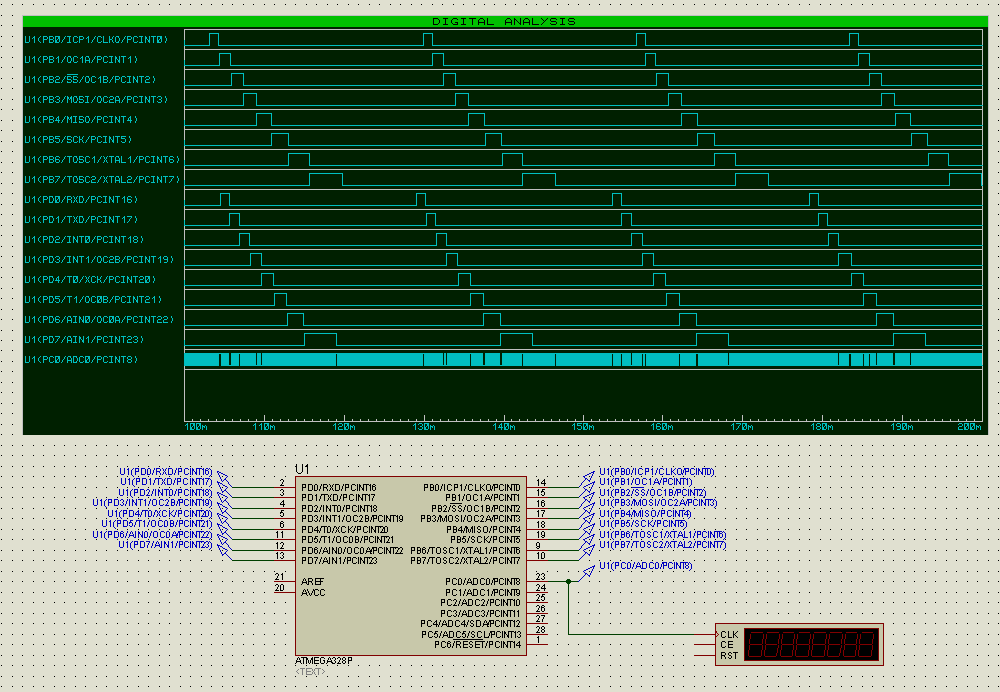 the user code is quite simple:

Once it is set-up, you can just leave it alone and no addition attention is required. You can change the duration of course, or disable / re-enable output on a given channel.

Total CPU drain is about 150K ticks in a second for 16 channel controller.

works on Arduino as well.

edit: if you port the code to TIMER0 (easily done), you can control 32 servos independently.

and if you combine this code with making timers out of the output compare functionality, you can shrink them all on one timer.

Not the answer you're looking for? Browse other questions tagged arduino-uno servo or ask your own question.

0
How do voltage and resistance work for two 5v servos when using an external 12v power supply?
0
Arduino Uno Constantly Resets with WiFi and 4 Relay Module
1
Arduino: Reading PPM values from MQ-131 Ozone sensor
1
build simple IR sensor with 220 ohm and 1000 ohm resistors
1
Arduino reduces the laser power
2
How to use a DC buck converter to regulate Uno R3 input voltage?
1
Is this a feasible circuit?