Help with wiring? Fritzing example inside

I am trying to prep my wiring for a 8x8 Led Matrix w/ Bluetooth according to the following instructable:

Instead of soldering everything together I'd much rather use a breadboard. I'm new to wiring, breadboards, and Arduino's in general. I was wondering if anyone could look over my sketch and see that the connections I've made are valid.

I'm basing my wiring off this image (See original instructable for higher resolution):

I realize the bluetooth module isn't the same. I'm just using this as a reference. The wires leading off the top of the board will be going to the LED Driver module.

EDIT: Thanks for the feedback guys. I have decided to go with the Innogear HC-05 module. I've adjusted the wiring according to that model. As per the suggestions, I've switched my power and ground rail and eliminated the resistors and ground for TX communication. (I've still kept a ground for the BT). Here's my new attempt:

Those are, in fact, the same board. When you look at this image (from Amazon)... 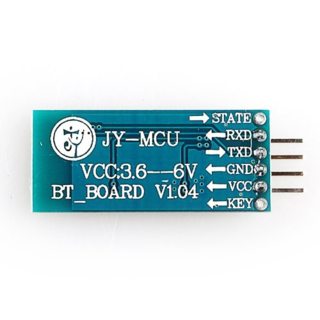 ...you can see that there are really six pins, just two of them aren't soldered.

tl;dr: it seems as you just need to skip the resistors for the yellow wire and make a direction connection. I'm not 100% sure about that specific part but there was another one that a reviewer specified that this was okay.

Note: I cannot comment on the other wires for the shields, but at a quick glance it looks good.

I am the author for the Instructable ethanx94's wiring is based on. It seems like the active and helpful members here have already helped iron things out.

If anyone is using the Arduino sketch downloaded from my instructable but is using ethanx94's wiring, do remember to change the SPI SS (Slave Select) pin in the sketch from 10 to 53 to reflect the correct pin used.

Look for the following line in the sketch and change the pin number 10 to 53:

Not the answer you're looking for? Browse other questions tagged led bluetooth wires or ask your own question.