Getting a fixed sampling rate

Ultimately I will move to a generic smart phone for this project. I'm trying to read 4 analog inputs from my arduino with a fixed 1kHz sampling frequency. I managed to set it to read at 1kHz as you can see from this link. The issue is that after running several times, I kept testing the frequency by logging the time vector (produced by arduino to the serial terminal) into Excel and calculating the frequency using the equation: f=1/(t2-t1)

I did this to the entire column and I noticed that I got a changing frequency. The difference is very big as it ranges from 780 to 1kHz. I need a fixed sampling rate because we will be applying some digital signal processing on the obtained results which obviously requires a sampling frequency. My code to send the data is the following:

EDIT: Thank you all for responding, As you wanted to see my data, here is a screenshot of the results after I applied Jwpat7's suggestion: 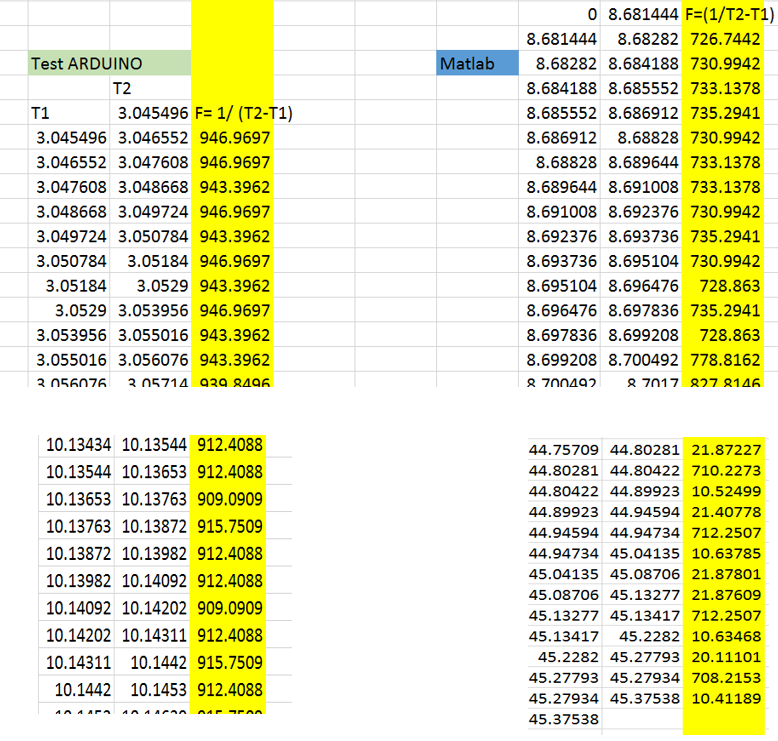 The yello shaded column is the frequency calculated, the first and 2nd columns represent T1 and T1 (T2 is just T1 shifted upward for easier calculation). You may notice the Matlab section, this is because I'm trying to plot the data in Matlab and use it to do the digital signal processing after transmission. The plotting will be real time (I'll the data in txt files for later processing). the bottom potion of the figure shows the frequency after a while....as you can see it's decreasing!

You can speed your code up slightly by sending a raw microseconds reading, rather than divided by 1000000. Floating arithmetic on typical Arduino devices can be quite slow. Also, the time to complete a divide is data dependent, so may occasionally but not always delay the next reading; that is, the division may contribute to jitter as well as overall slowness.

Another source of jitter is polling via loop() rather than within loop [see below]. However, this probably adds only a few microseconds of jitter.

To test if too-slow serial transmission is the problem, you could comment out all the serial printing and substitute Serial.println(currentMicros). (Or print the low two bytes of currentMicros.)

Polling within loop(): You could replace

This would tighten up the busy-wait loop and reduce jitter slightly.

If small changes as suggested above don't resolve the problem, you might need to use timer-based interrupts interrupt flags to schedule trigger ADC reads (as suggested in comments) and/or create a circular data buffer to make data collection timing less dependent upon data transmisssion timing.

The ADC Auto Trigger Source Selections table in the ATmega32U4 datasheet shows the ADTS bit settings to select various ADC trigger sources, which include Free Running, Analog Comparator, External Interrupt Request 0, and various Compare/Overflow/Capture events on Timer/Counter0, 1, and 4. Your ADC conversion-complete interrupt handler would need to read the ADC, store the reading, set a volatile flag to tell loop() which reading is ready, and set the ADC input selection to the next channel.

Serial transmission rate estimates: As noted in Edgar Bonet's answer, 115200 bps isn't fast enough to support 1000 Ascii-data serial transmissions per second. If working at 100% throughput, that data rate allows only 115 bits per transmission, or 11.5 characters, which typically is not enough for the data you are sending. Additionally, sending the time in Ascii adds another digit to the transmission length at the 10 second and 100 second marks, which may account for the observed slowdown in the "Test ARDUINO" scenario. (The slowdown in the Matlab case may be due to rapidly-growing memory use by Matlab; possibly try less-accurate plotting, or narrower plots, or a specialized graphing program.)

Edgar Bonet's code sidesteps this problem by transmitting data from a fixed-length (8 byte) buffer in binary, hence the 80000 bps figure he mentions (8 bytes times 10 bits per serially-transmitted byte times 1000 readings per second). Since ADC readings are timer-triggered, there probably is no real need to transmit a clock time with each reading, but resynchronization (in case of lost bytes) might need to be added somehow. Possibly one could send a 9-byte packet at each transmission; the extra byte would allow use of a protocol to support error-detection, resynchronization, periodic clock readings, and packet counts.

Expanding on my previous comments...

The only reliable way to get jitter-free ADC readings is to trigger the ADC from a timer event. I wrote the following program to demonstrate the approach on an Arduino Uno, as I don't have a Leonardo. The program configures the Timer 1 to set it's overflow flag every 250 µs, and the ADC to start a conversion on every rising edge of that flag. When the conversion is done (104 µs after it started), the ADC ISR fires. It's job is to retrieve the conversion result and set the analog multiplexer for the next channel, switching round-robin through channels 0 – 3.

From a cursory look at the ATmega32u4 datasheet it would seem it's Timer 1 is identical to the one of the ATmega328P powering the Uno, save for an extra PWM channel. The ADC, however, is slightly different, but similar enough to make porting fairly straightforward. At least the setting of ADMUX would be different.

What you have here is a classic case of the measurement of something changing what is measured.

I guessed when I saw your question that the time taken to transmit all that serial data would be longer than 1 ms. If you really were transmitting at 115200 baud then it would take 2.6 ms to send the 30-odd bytes you are sending (30 * 1/11520). Since you are using a Leonardo you get USB speeds which is faster but not infinitely fast.

I could reproduce your figures when I tested.

However if I comment out the two lines that send the time:

Then I found that pin 13 toggled at exactly once per millisecond.

That is only 4 µs out - within error range for the processor clock.

Uncommenting the timing code I found that for a short time I still got 1 ms per iteration, but it then dropped down to around 1.04 ms (ie. 960 Hz). I am guessing that some USB buffer, somewhere, is filling up and not being emptied as fast as you would like.

Notice how simply sending the number of microseconds has increased the time between toggling the pin?

It is helpful to have extra hardware to hand to measure things like this. Using the processor that you are trying to time, to send its own timing information is fraught with problems.

Not the answer you're looking for? Browse other questions tagged arduino-leonardo or ask your own question.

0
Could someone explain this code that sets up the software serial port data rate?