Problem with receiving data from Arduino via HC05 sent by Java

I want to both send some sensor data via Bluetooth (HC05) and Arduino to Java and I also want to send some command data via the same Bluetooth and serial port to Arduino.
I've managed to do the first part (arduino to java) successfully with this code:

The problem is whenever I want to write a char packet via the same HC05 connection to arduino, it sometimes works. In fact, whenever I click the button firing the write method, I see the packet received correctly but when I click the button again or click it rapidly, it sometimes outputs garbage in arduino side.
I do have delay in my main loop in arduino side and I'm using it to control the sampling rate of sensors. I've timed arduino side's calculation time (except delay of course) and it takes about 52 milliseconds.
I suspect whenever I fire the write method while arduino is busy in main loop, the received data becomes gibberish. So here are the questions:

1- What is the cause of this problem?
2- How can I achieve the goal I mentioned?

Here is arduino-side code receiving and mirroring the received packet in arduino's own serial port (for me to see):

For example, here is the string I'm sending from Java via HC05 to Arduino:

And here is the result of Arduino's behavior caused by me sending the same packet multiple times: 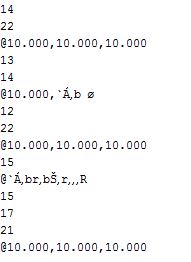 Any help is appreciated.