I'm trying to read 4 analog inputs (1kHz speed). I changed the prescaler to 16 for my Arduino Leonardo according to this link. I then tried to read the analog pins and I used the following code to display the time and the readings:

I connected 2V from the DC supply to all the 4 channels and the readings were similar. I used the output from the serial monitor and pasted the readings for 1 sec in Excel to see the frequency. With a 9600 baud rate and no delay between the readings I got 200 Hz (for the 4 analog inputs).

Why is that happening? And is there a relationship between the sampling frequency and the baud rate? Is my way of finding the frequency correct? If not what's the right way?

Finally, I'll be plotting the readings in Matlab, so I guess this will affect the sampling frequency. How can I control it so that I'm sampling with 1kHz rate for all the channels?

Here is the screenshot of the readings from the 4 channels (2V input). 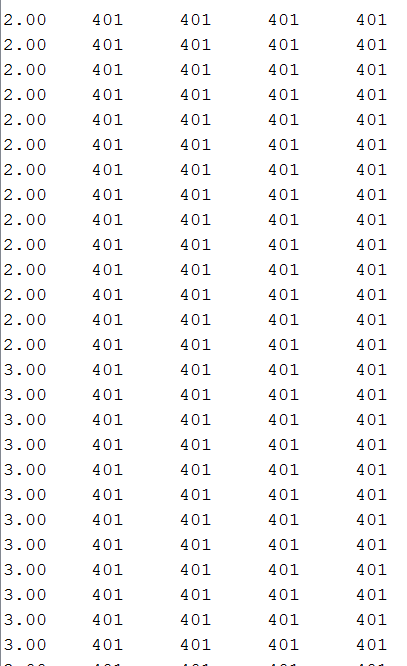 Summarizing everything, I need to know the following:

EDIT: I accepted the answer below, if anyone has the same problem , please make sure that you change the prescaler as I mentioned above for the best results.

At first I thought that the main problem was not that you too slow at sampling, but that you were too slow at transmitting the data. As Edgar already stated, at 9600 b/s you need 22.88ms to send a line, so the maximum frequency is less than 50Hz.

However as you experienced, the speed you are getting is 200Hz. This is because that calculation is right in the case of a real serial interface. Arduino Leonardo, on the other hand, emulates the serial interface. But.. There is no such thing as baud rate. If you look at the CDC emulation source code you will see that the baud rate you pass to the begin function is ignored.

Now, if you want a 1kHz sampling (or any delay multiple of 1ms) you already have a timer running (so you can just use that):

NOTE: The millis() function is replaced by micros() according to Edgar's and Nick's comments.

Change just the define to change the sample time. Now its set to 1000us (i.e. 1ms, so 1kHz), but don't go much higher otherwise you will have to check accurately the sampling time and the transfer speed. The t variable is not needed anymore.

Just a side note: this will also fix the bug in your code that prevents the program to display the current timing (instead of printing 2.5 it prints 2.0).

If you need a faster sample rate you should use another timer to get the correct timing, but again avoid delays. Not needed anymore

Two ways to sample at or near a given frequency:

I tried your program on my Arduino Uno with similar results : it prints about 44 lines per second. Then I did the math:

Now, since you are using a Leonardo, things could be a little different, as the Leonardo does not use a real serial port, but a virtual one. You may still try to increase the baud rate to see if it makes any difference.

A few recommendations to get good performance out of the Arduino boards.

The above eliminates several bottlenecks typical of the newbie example programs. The issue remaining is that, to optimize speed, you never converted the raw binary data vectors to a tab-delimited text file that MATLAB or GnuPlot can read with ease.

A simple C, Java, or Python program can then read the 12 byte vectors and convert the byte groups of 4, 2, 2, 2, and 2 back into the 32 bit time stamp and the four 16 bit unsigned channel values in a loop. The byte order is what you chose in your Arduino sketch. You will need to use the left shift operator and bitwise and and or operations to reconstruct the time stamp and four channel values. At the end of this loop, you can write these values as a single tab-delimited line coresponding to the current binary input vector. Iterate through all the vectors to get a complete tab-delimited data file.

You can experiment with different delayMicrosecond values to get different sample rates, and you can calculate our baud rate to stay ahead of the sampling so that the program could theoretically run indefinitely without backing up the Serial buffer on the Arduino side. Each Arduino analogRead and Serial object has its own maximum speed, which you can find by experimentation.

Not the answer you're looking for? Browse other questions tagged arduino-leonardo frequency or ask your own question.

3
Getting a fixed sampling rate

1
Relationship between baud rate and the frequency of vibration read using ADXL
0
sensor sampling frequency
2
How can I set 4 Arduino Leonardo PWM-ports between 200Hz and 1kHz?
3
Getting a fixed sampling rate
2
Contoller for a stepper motor
0
Reading multiple cases on Serial
1
How to add prefactor to clock frequency at compile time?
3
Multiple Time-Sensitive Tasks