Would an infinite loop inside loop() perform faster?

When you're writing a typical sketch, you usually rely on loop() being called repeatedly for as long as the Arduino is running. Moving in and out of the loop() function must introduce a small overhead though.

To avoid that, you could presumably create your own infinite loop, like this:

Is that a viable way to improve performance? Will it cause other problems if loop() never returns?

The part of the code on an ATmega core that does setup() and loop() is at follows:

Pretty simple, but there is the overhead of the serialEventRun(); in there.

The x and volatile is just to ensure it isn't optimised out.

In the ASM produced, you get different results: 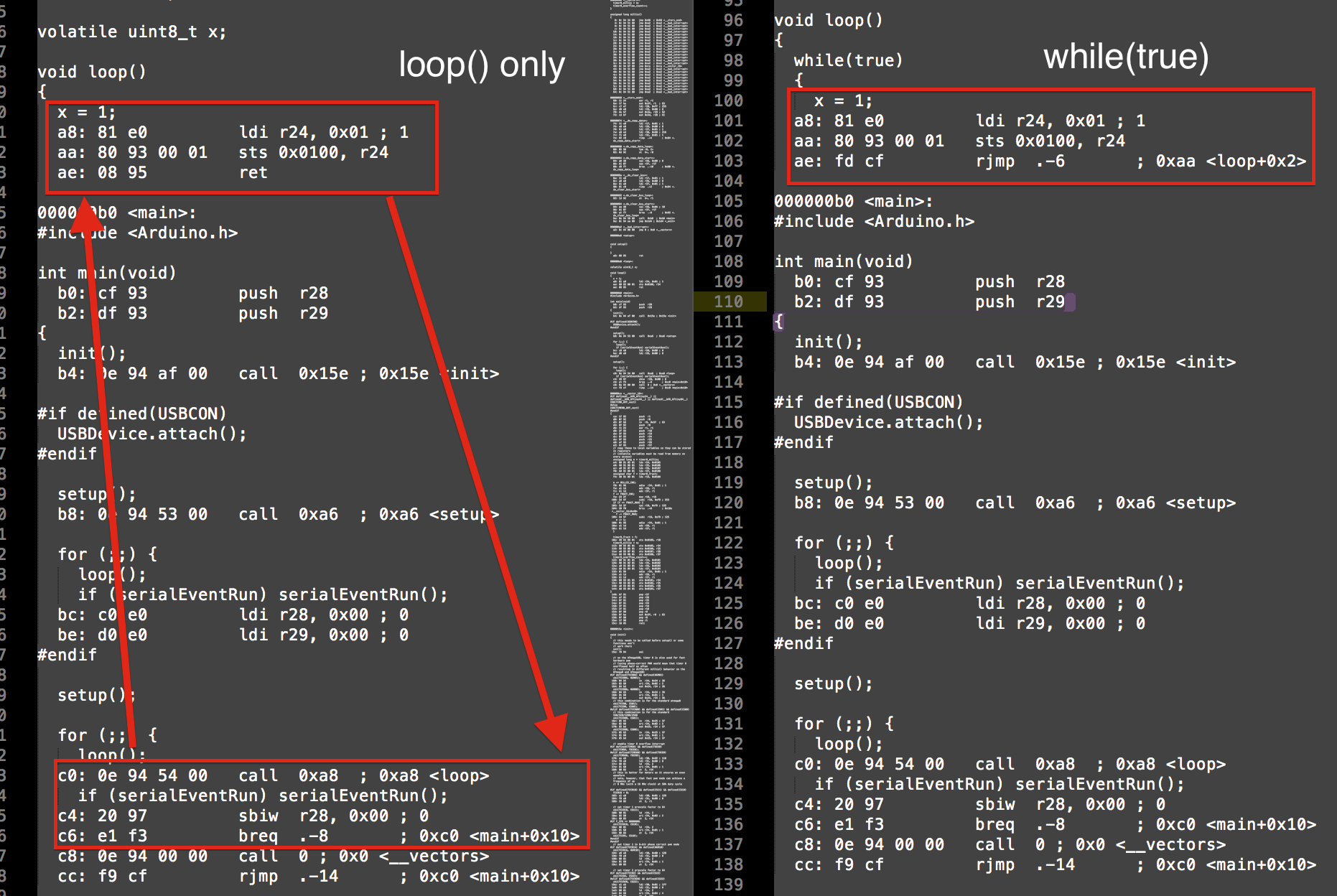 You can see the while(true) just performs a rjmp (relative jump) back a few instructions, whereas loop() performs a subtraction, comparison and call. This is 4 instructions vs 1 instruction.

To generate ASM as above, you need to use a tool called avr-objdump. This is included with avr-gcc. Location varies depending on OS so it is easiest to search for it by name.

avr-objdump can operate on .hex files, but these are missing the original source and comments. If you have just built code, you will have a .elf file that does contain this data. Again, the location of these files varies by OS - the easiest way to locate them is to turn on verbose compilation in preferences and see where the output files are being stored.

Run the command as follows:

And examine the output in a text editor.

Cybergibbons's answer describes quite nicely the assembly code generation and the differences amongst the two techniques. This is intended to be a complementary answer looking at the issue in terms of practical differences, i.e. how much of a difference either approach will make in terms of execution time.

I did an analysis involving the following variations:

The sketches can be found here.

I ran each of these sketches for 30 seconds, thereby accumulating 300 data points each. There was a 100 millisecond delay call in each loop (without which bad things happen).

I then calculated the mean execution times of each loop, subtracted 100 milliseconds from each and then plotted the results.

NOTE: The actual time values are not of significance here, the difference between them is. The ~90 microseconds of execution time includes a call to Serial.println, micros and delay.

NOTE2: This was done using the Arduino IDE and the default compiler flags that it supplies.

Not the answer you're looking for? Browse other questions tagged programming avr-gcc performance or ask your own question.

10
What is the difference between declaring a variable outside of loop and declaring static inside loop?
2
Can I automatically loop inside a library?
2
Loop inside switch statement
2
Diffrence between running once and infinite
0
Is a variable declaration inside a loop static declaration or dynamic?
1
declared variable inside void setup is forgotten in void loop
3
Variable declaration inside main loop
0
Difference in increment & decrement loop execution speed