Why adding a LED between Pin 3 and Ground causes LCD display not to show text?

For a project of mine I am programming an Arduino UNO to show information I get from some sensors on an LCD display.

As a first step I setup Arduino to show "Hello, world!" on the LCD, which worked. 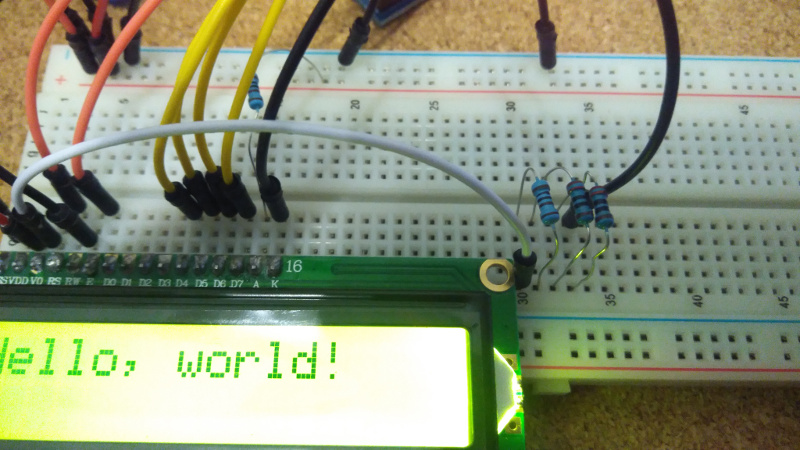 For "decorative" reasons I wanted to add some LEDs between the resistors that I placed in series between PIN 3 (V0) of the LCD and ground (about 1.5K Ohm total resistance).

I first of all added one LED between the last resistor and ground. To my surprise this causes the LCD display not to show "Hello, world!" any more. As you can see the current is flowing (the LED is lit), but I can't understand why the LCD does not show the text. 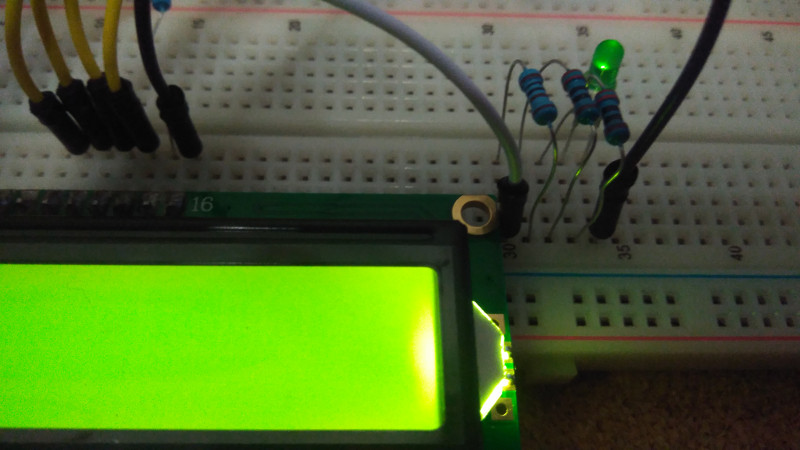 Can you help me understand what's going on? I know very little of electronics and I am learning it by doing, so I would appreciate an answer that is good for a beginner!

In a typical 1602 LCD pinout, pin 3 or V0 is the contrast setting for the display. It usually is set to a voltage near ground, often by using a 10K pot with ends connected to Vdd and Vss with wiper to V0.

By putting an LED in series with your resistors (that apparently go to ground) you've either disconnected V0 from ground or have raised its voltage by the LED voltage. This reduces contrast to the point that characters aren't visible even though they are on the display.

The LED backlight remains on and at the same brightness as before because it is driven via pins 15 and 16, independent of all other display settings.

Edit 1: I haven't duplicated your circuit to take measurements, so at the moment don't know for sure; but (in resistors-only case) V0 from pin 3 on the 1602 LCD board apparently sources some small current through your 1500 Ω to ground. When you add an LED it can disconnect V0 from ground or can raise its voltage by the LED voltage, as follows: firstly, if the LED cathode faces V0 and V0 is positive, no current will flow through the diode, thus disconnecting V0. Secondly, if the LED anode faces V0 and V0 is positive, current will flow through the LED. If the LED lights at all, most of its Vf characteristic voltage (typically between 3 and 4 volts for a green LED) will appear across it. Thus, V0 sits at close to Vf plus whatever drops across the resistors.

*The same as for other diodes, LED forward current increases exponentially with voltage (Ref: wikipedia on LED physics) hence voltage change is tiny over large changes in current when an LED is emitting light. In other words, if the LED is lighting up, its voltage will be close (ie within a few dozen millivolts) to its characteristic band gap voltage. See petervis.com's led-resistor-calculator for a "Chart by Colour" that shows characteristic Vf forward voltages.

Can you help me understand what's going on?

that pin controls the contrast and it needs to be 3.5 - 4.x volt (typical) below Vcc. an led in conduction would drop 2 - 3v, depending on the led, making that pin's potential much closer to Vcc -> minimum contrast so you cannot see the text being displayed.

Not the answer you're looking for? Browse other questions tagged arduino-uno led lcd or ask your own question.

3
Do I need to use a resistor if I am using a potentiometer to control an LED's brightness?
2
20x4 LCD shows alternating blank lines
0
Lighting 5 leds...the last one lit is always dim
1
Simple LED circuit is not working
0
Traffic lights: gpios against 5V or ground
1
Implement two processes at the same time
1
OSEPP 16x2 LCD Display Turns On But Does not Display any White Boxes
2
Using MAX30100 SpO2 value to turn on LED