I bought USB > FT232RL, can I use it to program a bootloader onto an Arduino?

I bought this thing off of eBay: 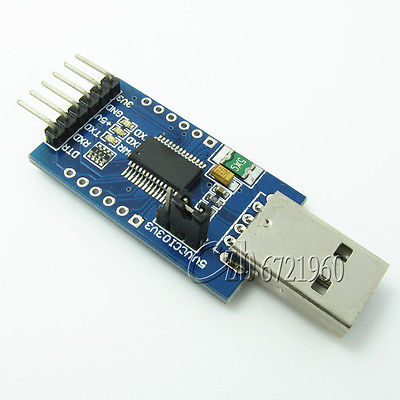 
Answer - summarized from different answers below (as I can only mark one answer below as accepted):

In fact, you can, but you are unlikely to enjoy it as it will be fairly slow.

While this module is intended for serial communications - which the ATmega won't support until it has a bootloader on it - the chip around which it is built can also be operated in "bitbang" mode:

Using reconfigured pins of this wired to the ISP pins of your target, and an implementation of the ISP algorithm running on the PC, it will indeed be possible to load a bootloader on to a new ATmega chip. However, USB is not designed for this type of usage - it is meant to move large blocks of data, rather than to efficiently do sequences of tiny operations. The result is that the loading process will be drastically slower than with other methods. You may also spend a fair amount of time tracking down software to do it, or writing your own.

If you have an already working Arduino-style board available, you can use that to program your new chip:

You must use a ISP or (HV)PP programmer in order to write the Arduino (or similar) bootloader to the chip first. Only once you have done so will you be able to program it via a serial connection.

NO. The serial device can only be used when the Atmel ATmega chip has a bootloader burned onto it.

To burn a bootloader onto a Atmel AVR chip you need a "AVR ISP (In-System Programmer)". There is a small 2x3 pin contact on your Arduino board.

In the Arduino IDE under the menu "Tools", "Programmer" you will find the different "AVR ISP (In-System Programmer)" that you can use.

Please note that some programmer have an 2x5 pin ISP contact and if that is the case you will also need to buy a 2x3 to 2x5 adapter.

Most Arduino clones bought on ebay have info witch clone of Arduino they are.

Im a bit confused, I have bought ~10 Arduino clones from ebay and all had a bootloader. And they are clones of UNO, Nano, Leonardo and Mini Pro and that is what I uses for settings in my Arduino IDE.

I use a USBASP (example: http://goo.gl/kCiMd) as my external programmer.

Not the answer you're looking for? Browse other questions tagged bootloader avr isp or ask your own question.

5
Changing pins used in ArduinoISP example
3
Using ArduinoISP on an Arduino Uno to program an ATmega328
1
Can I place bootloader directly onto Atmega2560 and have USB?
2
Upload a .hex file, using a standalone ISP, without overwriting bootloader
0
Is the Arduino bootloader really the Atmel bootloader? Can I use Flip to upload?
0
Problems burning bootloader on custom ATMEGA2560 board for High-powered model rocketry
3
Atmega328p - Going low power 1.8V using 4Mhz oscillator - Bootloader flash
0
Bootloader onto an ATmega328p (3.3V/8MHz), the dude won't finish his business
2
Can't get "Burn Bootloader" working - Arduino Nano
0
Problem in upload bootloader into esp32