ISR and multiplexing- time required to execute the code in Arduino

Below is an Arduino sketch for a basic animation, taken from the book Beginning Arduino by Michael McRoberts. Also, the connections have been shown. From what I have read elsewhere, this is the standard kind of code used to drive a LED dot matrix using the 595 shift registry, or the like (for example the MAX7219). Regarding the functioning of the code, I have two questions. 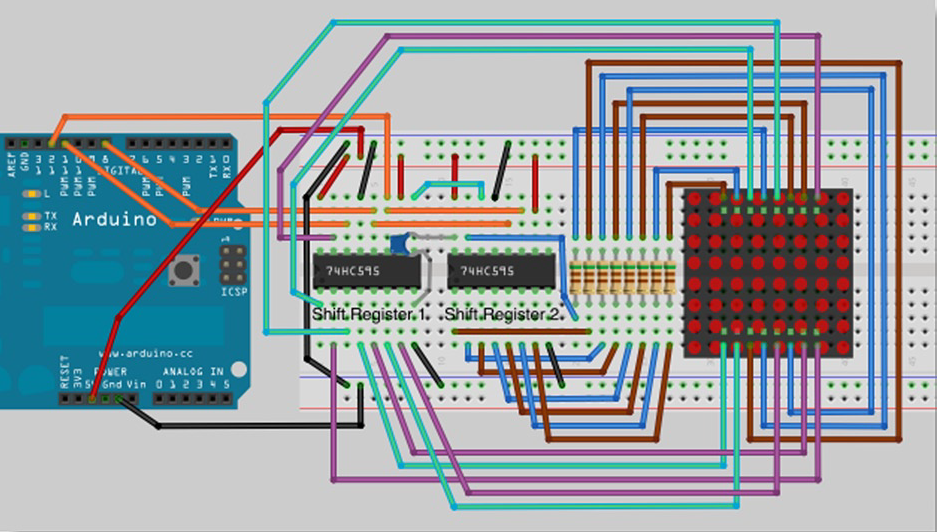 In the above code, I tried putting Serial.println(micros()) in the screenUpdate() loop, but I git a very confusing results in which the time displayed seemed to increase and then decrease randomly. I did not understand why. Has it got to do something with ISRs? Sorry for the apparently clumsy question.

I executed the following code (from the same book) out, which includes a MAX7219 driver (with the usual setup) and creates scrollable text. It worked perfectly well. And I just want to understand how this ISR and multiplexing go together, and how do we make sure the frequency is appropriate. More of an academic question rather than a practical one.

(In a comment the asker mentioned they're not sure of the "usual approach", so I've provided this answer to hopefully help clarify)

Here is my code for using a single 595 to drive the columns, and hooking up the rows to the Arduino pins themselves. Here I demonstrate a clear delay in each row update, as well as another delay before the image changes. I hope this helps clear up your confusion, and I apologize for not have a 2 595 setup handy (though I have 2 595s so if this doesn't help you, I'd be more than happy to set it up...), but it should be easy to adapt for a second 595. This supports a variable amount of width and height.

I also answered this assuming you just want the dotmatrix display functioning correctly, and I didn't focus on ISR. On first glance I see no delay in the row updating on the ISR version, or a delay when setting the latch pin and the whole thing seems pretty confusing. Honestly I think it might work in a perfect universe but I'm not sure (it wouldn't, as the other answer said, you'll probably just maybe observe a flicker and one row being lit). If this isn't an X Y problem and you really need ISR, I can answer that too, it just seems like we're getting into a lot of questions at once here...

I think the code is likely wrong.

the code is called every 10ms, each time refreshing all columns and all rows and then immediately overwriting them all. so you should just see a quick flicker.

the typical way to approach this is to have a static variable to remember the row (or column) to be lit, and then load up the corresponding data for that row + columns when the display routine is called.

now that I have a little bit more time, I would just add to the comments above.

we know the issues, as outlined above. here is a confirmation of it, in a simulation. 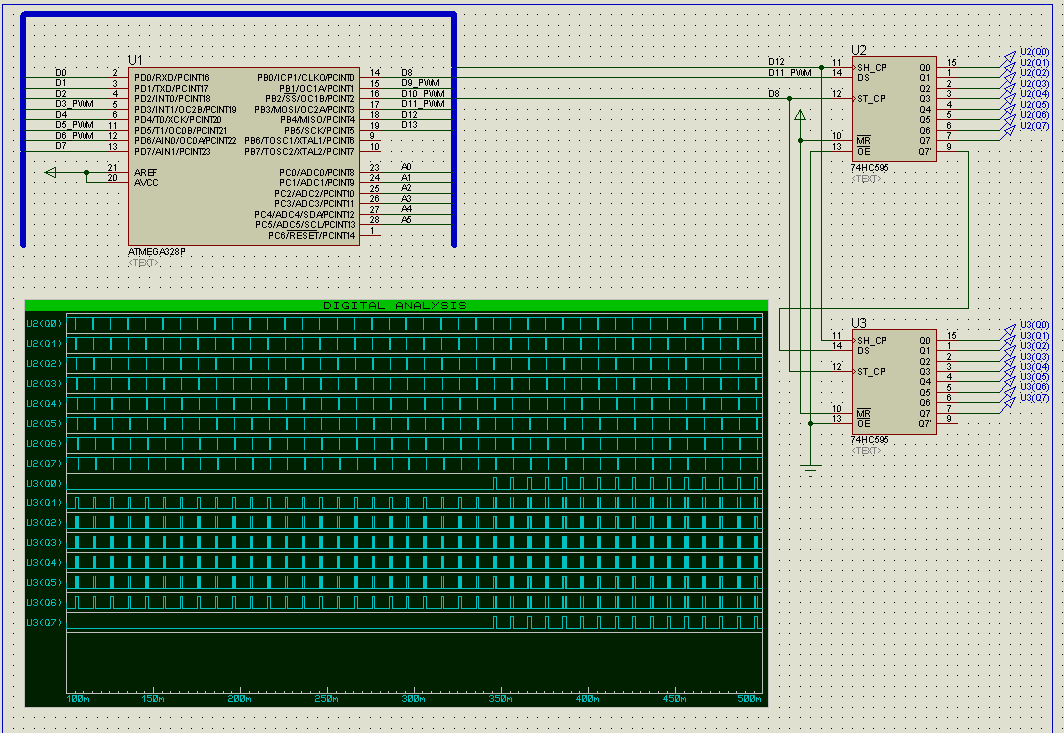 I ran your original code on an arduino uno. U2 is the shift register connected to the led matrix's rows (active low), and U3 to the columns (active high).

the net result is that you for the most part don't see anything being displayed on the led, other than very fast flickers.

here is the solution: rewrite screenUpdate(), as below:

the updated routine, screenUpdate2(), utilizes a static variable, row, to remember the current row to be displayed. it shifts out the column data, and sets up the row to be activated, and then strikes out the display to the led matrix. after that, it updates row for the next invokation.

here is how it works in the simulation: 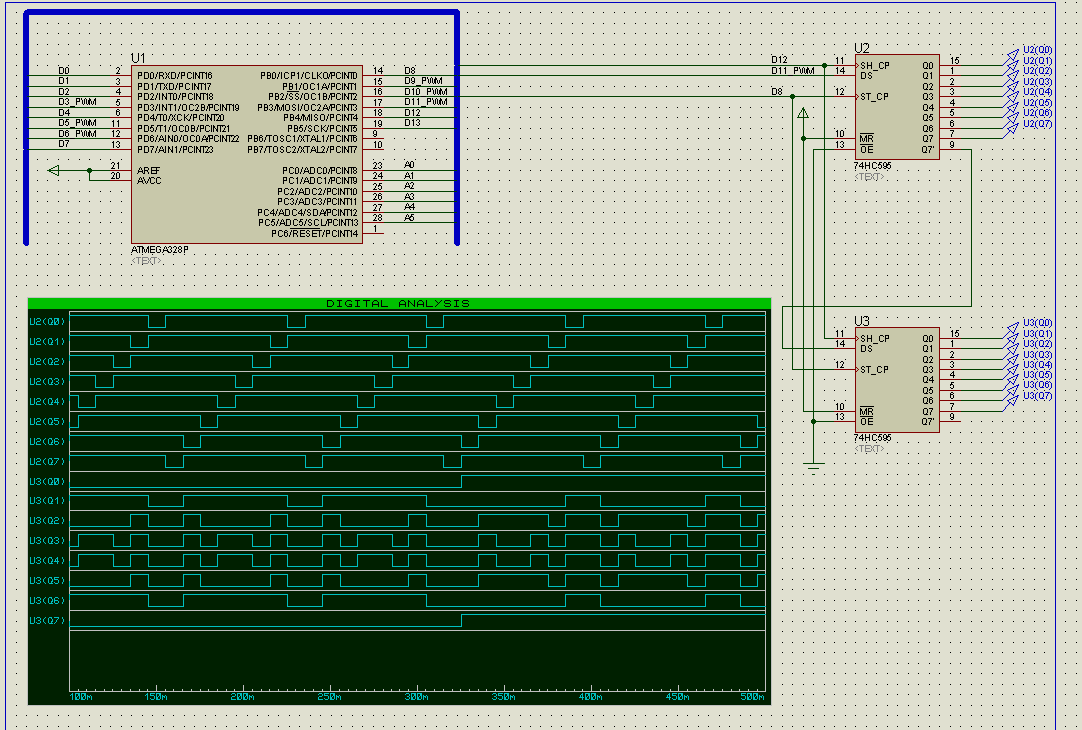 post-it: if the main loop has good execution time (short, and fairly deterministic), you can run screenUpdate2() in the loop and it will work as well. running it through an interrupt provides better consistency.

short after posting the above, a couple sharp eyed individuals noticed that the output data seems to be flipped (more noticeable at 320ms in the simulation posted above). good catch.

that's due to the following lines in the main loop:

I'm not sure what its purpose was in the original code - creating a blinking effect? - but if you comment out those lines, you will see that the execution would be as you would have expected: 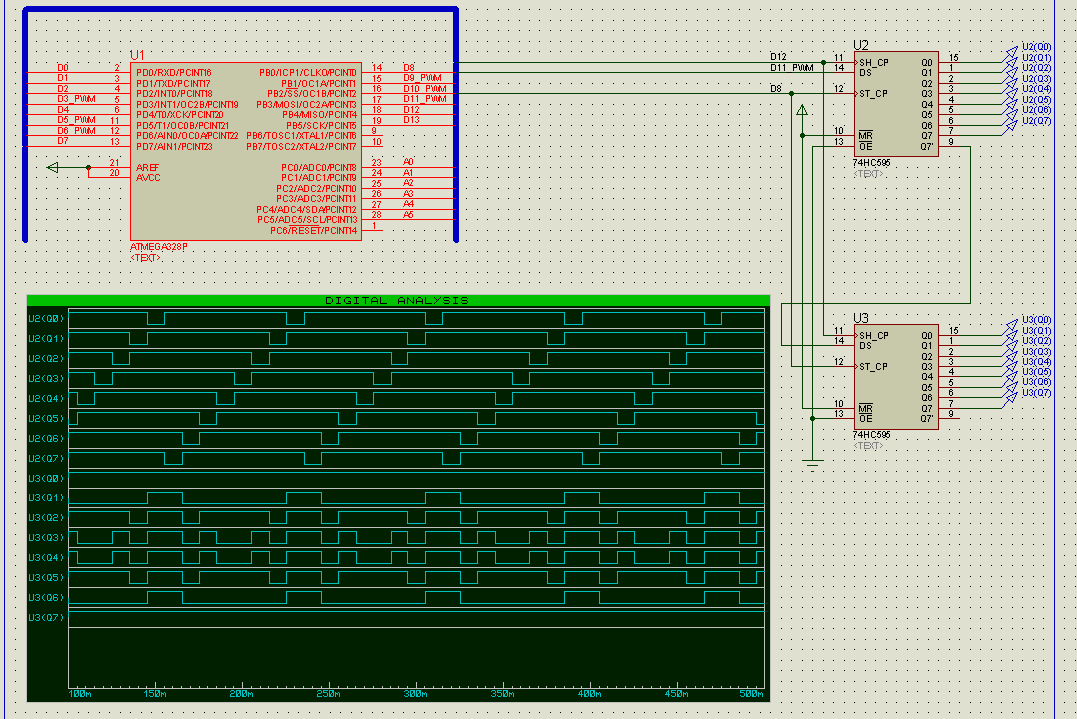 you will find that the values match exactly what's in the led[] array.

you can think of led[] as a ram display buffer that stores information to be displayed. all your application code needs to do is to manipulate / update it in the main loop. the display routine, when called by the timer isr, will update that for you periodically, in a fully transparent and carefree manner.

I tend to utilize this approach with a lot of things. Thus having a hook to a timer to execute a piece of code is a valuable tool for a programmer to have.

Not the answer you're looking for? Browse other questions tagged arduino-uno led time isr max7219 or ask your own question.