How do you configure ADC7 on the Arduino Pro Mini as a digital output?

I'm attempting to use the pin labeled 'ADC7' from the Atmega328p TQFP package. The Atmega documentation suggests that can be used either as an analog or digital I/O point. I'm trying to configure it as a digital output.

Referencing the documentation (and specifically arduino_pins.h), I determined the associated pin number was 21. Thus I called pinMode(21, OUTPUT). However, this pin does not appear to be working with my SPI device. I previously tested that the device worked, but I made a last second change of pin and am now using ADC7.

So my question, is there an additional step required to configure this pin as a digital output? I noticed that this pin doesn't exist on the DIP Atmega328p (used on the Arduino Uno), so I'm not sure if I have to add another line of code somewhere.

Those are analog pins only. They can't be used as outputs or digital inputs.

This may be a little left field, but I use the ADC6 and ADC7 inputs to detect switches. I just don't use the digitalRead() function, but instead use analogRead() function. Using a resistor network and switches and some decoder software code in our sketch, we can use a single input pin to interface with many more switches. The switches can only be on one at a time, but in many instances, this would be OK.

Gerben's answer probably is correct, but there are some interesting discrepancies in Atmel datasheets for various models of the ATmega168 and ATmega328, as outlined below.

Regarding port E, the 2016 ATmega168PB datasheet, Atmel-42176G-ATmega48PB/88PB/168PB_Datasheet_Complete-03/2016, says the following and also lists several Alternate Functions while referring to Timer/Counters 3 and 4 (although there seem to be no registers in the register summary relevant to such Timer/Counters):

"Port E is an 4-bit bi-directional I/O port with internal pull-up resistors (selected for each bit). The Port E output buffers have symmetrical drive characteristics with both high sink and source capability. As inputs, Port E pins that are externally pulled low will source current if the pull-up resistors are activated. The Port E pins are tri-stated when a reset condition becomes active, even if the clock is not running."

According to everything you can find in the datasheet about ADC6 and ADC7 they are analog only pins.

The pinout for the TQFP-32 as used on the Pro Mini shows those two pins as only having the analog functions: 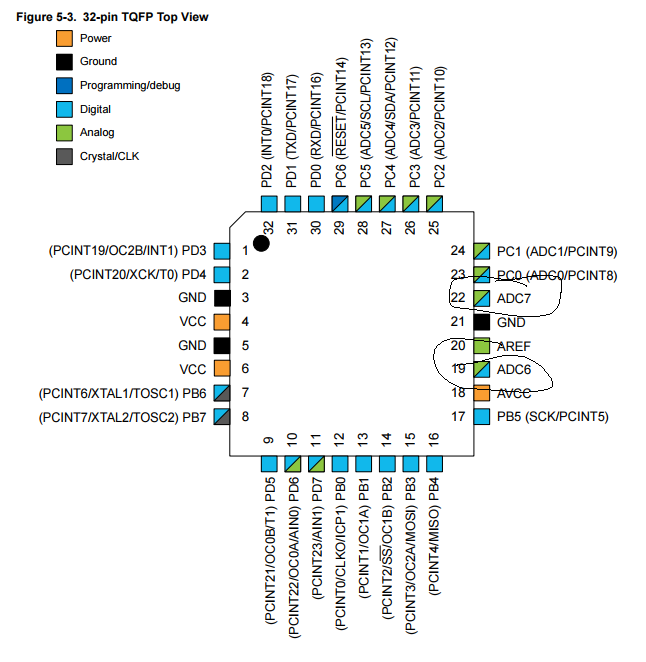 I suspect the color coding of the pins may be wrong - they should be solid green. They have no port names on the pins, purely the ADCx designation.

The block diagram for the chip shows the ADC6/7 pins being separate from a port:

As you can see the other 6 pins are referred to by the digital port they share, but ADC6 and 7 are known purely as ADC6 and ADC7.

The pin function table, 6-1, shows ADC6 and ADC7 as the only functions on those pins. No digital port names, nothing - just purely analog input.

So in summary, for the ATMega328P chip used in the Arduino Pro Mini you cannot use those two pins for digital at all, only for analog input.

I appreciate this is an old question but those pins are subtly different on the ATMEGA328PB compared to the ATMEGA328P which I discovered recently. See the Microchip app note AT15007, page 3.