With regards to the USB host library:

I would like to add USB host functionality, to a particular Arduino setup, whilst, also, being able to use an Ethernet/SD (or just SD) shield.

As both the Ethernet shield and USB Host shield use pin 10 to select the W5500 and MAX3421E respectively1, obviously I can not use a standard USB Host shield. However, I could employ one of the small form factor boards, such as the USB Host Shield 2.0 Arduino UNO MEGA ADK Compatible Google Android ADK which I found on eBay: 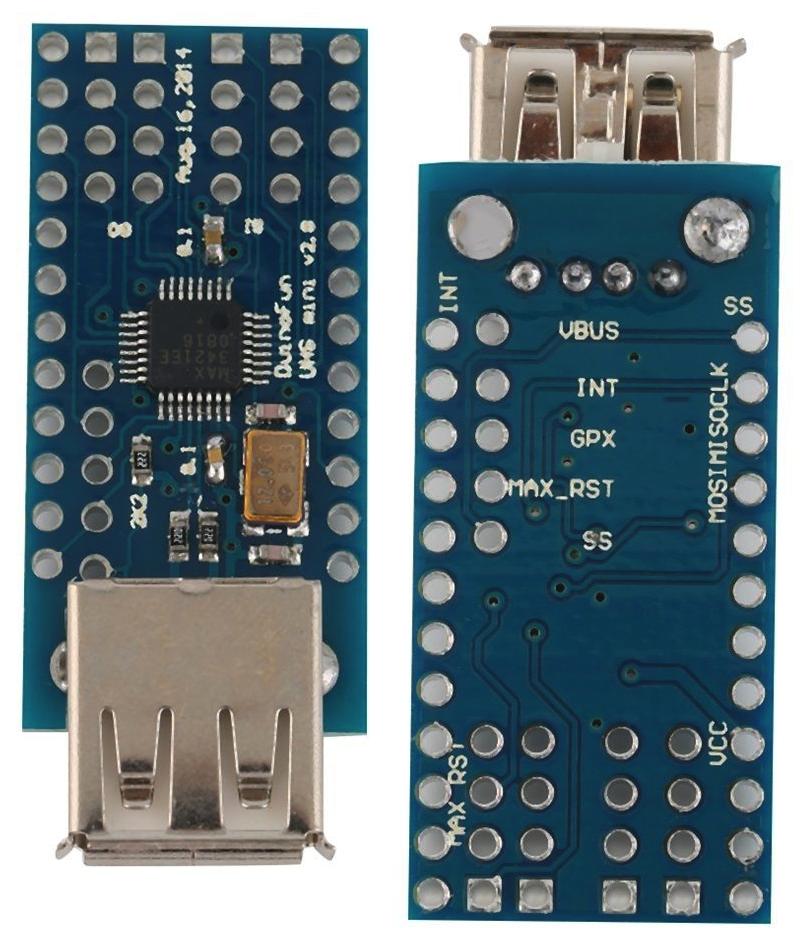 As this board is not in the usual shield "shape", one would not be constrained by which pin to connected to which MAX3421E input/output, in particular the chip select (SS) input. So, one could use a pin (or pins) that is not reserved by the Ethernet shield.

However, it does not appear to be possible to simply specify the "select pin" (i.e. the Arduino pin connected to the SS line) when using the USB Host shield library (or any of the pins used by the library), in setup().

Therefore, I wondered if it was possible to modify the library, so that the pin used to select the USB/MAX3421E could be changed, either by:

The latter two options, I could work through, given the time. However, as a quick and dirty hack, where would I hardcode in a change from pin 10 to a pin of my choosing? Does anyone know? Has anyone had to do this?

I have had a look through the library to see where pin 10 is defined as the chip select, and avrpins.h looked like a possible candidate for modification, although it would be rather "rude" (for want of a better word) and probably mess up the other boards.

usbhost.h seems a much better proposition. Looking at usbhost.h, the lines 88-91:

Looking at the statement

However, what I don't understand is that for the statement

1 For the USB host shield, from Arduino USB Host Shield

The key piece of information here is that pin 10 is used by both the Uno and Mega boards.

For the Ethernet shield, from Arduino Ethernet Shield V2

Note that because the W5500 and SD card share the SPI bus, only one at a time can be active. If you are using both peripherals in your program, this should be taken care of by the corresponding libraries. If you're not using one of the peripherals in your program, however, you'll need to explicitly deselect it. To do this with the SD card, set pin 4 as an output and write a high to it. For the W5500, set digital pin 10 as a high output.

Here, yet again, the key piece of information here is that pin 10 is used by both the Uno and Mega boards to select the Ethernet.

In order to change the Arduino pin used to select the USB Host board, in order words, where the device's SS line is assigned to an Arduino pin (with the Arduino as the SPI Master and the USB host is the SPI slave), the line to change is at line 43 in UsbCore.h:

The clue was in the comment on line 27 in UsbCore.h

With this suggested modification to the code, Pin 5 would go to the USB Host SS line and then there would be no conflict with the Ethernet board that uses Pin 10 for its SS line.

This issue, I have subsequently discovered, is covered by the USB Host Shield Hardware Manual, under the Interface modifications section. I guess I should have just read the manual first! RTFM...

Clarification of the issue

I must be honest that my question was somewhat confused. After having read the SPI library, it states that

Note about Slave Select (SS) pin on AVR based boards

All AVR based boards have an SS pin that is useful when they act as a slave controlled by an external master. Since this library supports only master mode, this pin should be set always as OUTPUT otherwise the SPI interface could be put automatically into slave mode by hardware, rendering the library inoperative.

With respect to the first paragraph, the Uno uses pin 10 and Mega uses pin 53 as the Arduino SS line - so that must be set as an output in order for the Arduino to be the Master. Are realising this as being my source of confusion, it became apparent that the typedef statements, in usbhost.h, were not where I should have been looking to change the device's Slave Select pin.

With respect to the second paragraph, I want to use pin 5 (for example) to control the Slave Select (SS) for the USB Host device, instead of the default pin 10.

Not the answer you're looking for? Browse other questions tagged usb or ask your own question.

5
How to choose a transmit pin in the IRremote library for an Arduino Uno?