I am going to do a project with a lot of Arduinos connected via I2C, where like of them can became master for a moment to announce an event. So I would like to see how much is the bus used. As there will be a central point, I thought about putting a LED there, from +5V to clock line, so it would shine when the transfer occurs and be black when the line is free. And so I would be able to guess the utilisation level of the bus. (The clock is effectively PWM going to zero often while in transfer, while being plain +5V when no transfer is active).

Of course direct connection is not the best idea, as it would disrupt the pull-ups and mess with the protocol (as it would drain a lot of power to clock each time it went down), there should be some separator/amplifier.

The question is - does anybody know a simple setting, where the LED would be driven by a small current to zero (that is inverting amplifier as simple as possible with high enough input impedance to not disturb I2C communication)?

Thanks for all hints :)

It can be done with two N-channel MOSFETs or one P-channel MOSFET (depending on what you have locally / can get / is in your bits box): 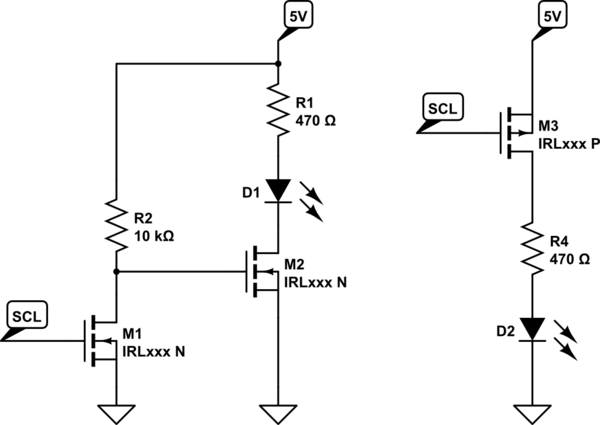 The right hand schematic, which is somewhat simpler, uses a single P channel MOSFET as a high-side switch. This is normally driven with an N-channel MOSFET to invert the logic, since it is naturally active-low. You don't want that, so you can just connect direct to the gate.

Note that all MOSFETs are "logic level" with a threshold voltage below 3V (or -3V in the case of the P-channel).

Not the answer you're looking for? Browse other questions tagged led i2c hardware or ask your own question.