Why does the serial monitor needs to be repeated a command?

I am experimenting with the serial monitor in an Arduino Uno. My project consists in a simple LED turning on and off at will with the commands "ON" and "OFF" respectively.

To achieve this, I use an HC-06 Bluetooth module, but because of the nature of the test I decided to disconnect it and 'debug' my project using the serial monitor as an equivalent.

The circuit has the following connection table:

...as you can see, I have tried to simplify as much as I can the circuit, as I wanted to make sure I didn't have wire problems.

The problem comes when I type the commands. Normally, an LED in the board will react (I think it's the RX one), but the LED in pin 12 will not react at all. After testing ten times with each command alternatively, I calculated the serial needs an average of 6 command repetitions in order to react. Exactly the same happens when the HC-06 is connected.

Is there a reason for this?

Your problem is, amongst other things, that you are assuming that all the serial data arrives at once, which doesn't necessarily happen at all.

I have a discussion about this sort of thing.

Rewriting your sketch using the ideas presented there we get this:

with the commands "ON" and "OFF" respectively.

I changed the test to be for "ON" and "OFF" not "LO" and "LF" which seems a weird way of meeting your requirements.

For this to work you need a delimiter (which tells the Arduino when you have finished sending a command). I have used linefeed which you can automatically send in the IDE's serial monitor (see bottom RH corner). 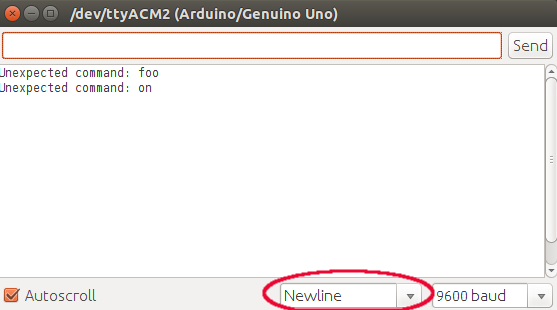 It worked fine for me, if I typed the entire command, "LO:" or LF:" (without the quotes of course). However, if I typed and sent one character at a time, it failed. The problem is quite likely the code:

If you send all of the characters at once, the while( Serial.available() ) loop will get the whole line and match it. But if there is any pause between characters, what does that if statement do? (Hint: loop() executes way faster than you can type!)

I was using the serial terminal built into the Eclipse IDE. Different terminal software might behave differently when you type a string and send it. Remember, any gaps between characters, and that first if statement gets time to do its dirty work.

Not the answer you're looking for? Browse other questions tagged arduino-uno serial led bluetooth or ask your own question.

4
Unable to use RGB matrix and the serial monitor at once
0
Can I create a serial.read command with the arduino code alone?
0
Controlling the Serial Monitor for 10 seconds
1
Serial comunication with HC-05 - Arduino UNO
1
having problems with my arduino bluetooth car project(with L298n Motor Driver)