I'd like to connect about 6 contact mics to my arduino and receive simultaneous signals to be used in my computer for an art installation.

Nonetheless, I don't know what's the ideal way to go. Shall I use Analog pins or Digital? How should I connect them - what schematics shall I follow? I read that ADC is CPU intensive, but I couldn't really find any viable alternative that explicitly shows the Digital deal.

Can I connect several contact mics to different analog pins and receive their input simultaneously as shown here? If this works, then it's perfect. 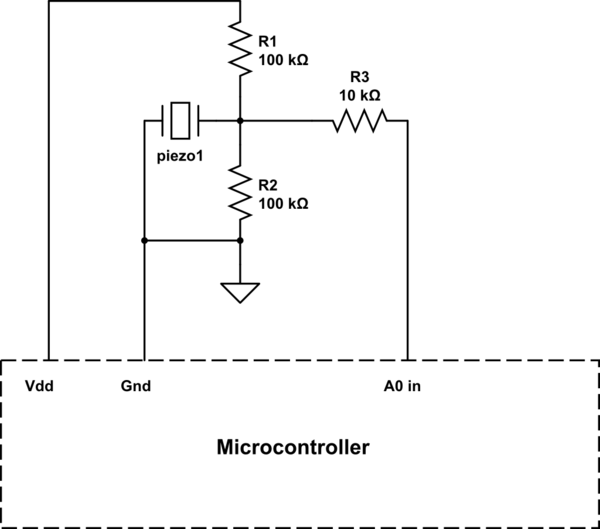 A piezo element can be connected to an analog input (A0 for example) of your microcontroller, but extra resistors are advisable if you wish to have a digital sample that is linearly proportional to the element's alternating voltage.
Andy's caution about over-voltage is relevant too - these elements can produce voltages far greater than your Arduino's DC supply voltage. Such over-voltage can cause damage. Resistor R3 helps limit potential damage.
Each piezo element will require its own set of three resistors (duplicates of R1, R2, R3). Many microcontrollers have multiple analog inputs - you can have as many piezo circuits as there are analog inputs. You cannot sample them all simultaneously, since most microcontrollers usually have only one analog-to-digital converter, which is switched between its various analog inputs by program control. A piezo element would have to be sampled, then switched to the next element for sampling, then the next....etc.
Sampling can be done fast enough that "audio" (however you define it) is fairly represented by the digital sample stream. However, be aware that processing these audio samples may be beyond the speed capability of simple microcontrollers like Arduino. That part is up to you.
Be aware that piezo elements make poor microphones. Units mounted in plastic shells are designed to output audio tones, and have significant resonant peaks. Frequency response is not flat, as required by a proper microphone.