How can I fix stuttering motors that are connected to ESC's [Arduino Uno]? [duplicate]

Been making a few posts about my drone and i am getting closer and closer to my goal to make it work.

Right now I have a problem with stuttering with all four of my motors (sometimes the motors does not even start but they beep instead). This is the motor and esc I use: https://hobbyking.com/en_us/mt1806-brushless-combo-include-esc-5030cw-ccw.html

I put together a very quick schematic on how i have everything connected: 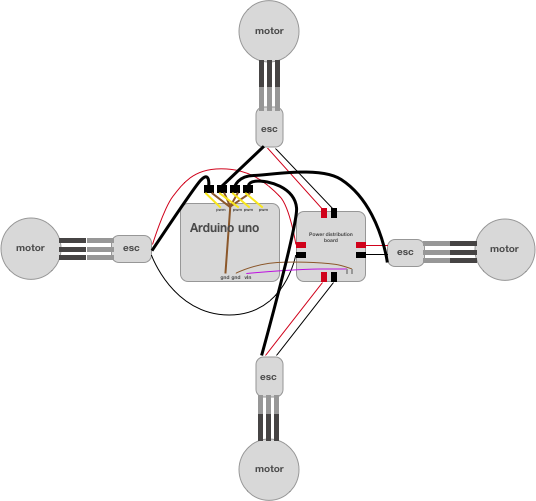 So motor connected to the ESC and the ESC grounds go to arduino Gnd, the signal pins from the ESC goes to different pwm pins and the rest of the esc goes to the power distribution where i also insert my 3s lipo battery. From my power distribution i connect two cables to my arduino uno gnd and vin pin.

When I use this very simple code:

The motors start like they should but they stutter (some motors move more than others) and as you can see in my code i tell them to stop after 2 seconds to see if i can control them and indeed they stop nicely.

This is a 3 second video on how it looks once I enter my lipo battery:

Is this a case of bad soldering somewhere perhaps or do I need to calibrate my ESC/motor? Codewise I am just using a simple Servo and then I just use the code I posted above. Do I need to add anything else maybe? Since all 4 motors are stuttering/buzzing it is most likely not a problem with the motor/esc i suppose!

My arduino uno is a chinese copy, could that have anything to do with it?

Also I made this post earlier with a little less information but more info about my soldering: All four of my ESC motors stutters when I run it on my Arduino, how can this be fixed?

Appreciate every help and tips!

It isn't clear from your diagram or the video what wire thicknesses you've used or precisely how currents are being routed, or how big your battery is.

Let BPG denote the ground terminal on the battery pack, and BP+ the battery's positive terminal.

Also, in your code try changing 100 on up to 200 or 250 (or near whatever the ESC maximum setting is) to see if problem persists at higher levels of PWM drive. Also if your battery pack is small, add some more packs of the same voltage in parallel, or try a heavier-duty pack.

Edit 1: Check whether each of the motors can work ok by itself. That is, either comment out three at a time, or use if-statements that check button or jumper settings. If all the motors work ok singly, try them in pairs or triples. There are six different combinations of motor pairs, so rather than trying all six of those you might first try the four different sets of three motors at a time, and if that reveals a combination of three motors that fails, try the pair combinations among those three to see if there is some interaction between two motors. If problems occur when testing with fewer than four motors, try swapping motors on to different ESCs, to find out if the problem is due to a motor, an ESC, or the battery. (You can also swap motors on ESCs and test all four at once, but testing with fewer motors going should provide a more systematic problem solving method.)

Beeping noise comes from the motors when the PWM of ESC does not have enough power to rotate the motor. Since you are hearing a noise, this is a good indication that PWM exists.

Now, if you lower your duty cycle, beeping noise should decrease and vice versa. This way, you can know that the arduino is capable of controlling your ESC PWM and duty cycle.

Since you can control duty cycle and you have a PWM and no motion, there are a couple problems that comes to mind.

I would say that the third is the most probable cause.

As for back emf detection, measure motor back emf yourself using your arduino (if you don't have an osilloscope, of course). Send data to PC and see if there is good back emf when you turn the motors (turn them fast using another motor or your hands with a quick motion)

Not the answer you're looking for? Browse other questions tagged drone or ask your own question.

1
All four of my ESC motors stutters when I run it on my Arduino, how can this be fixed?

1
I have 4 motors connected to their own ESC (that is connected to a power distribution board), how do I connect this to Arduino uno? (Drone)
0
Flash an ESC Through Serial USB without Arduino Interrupting the Signal
1
Do I need to use the PWM pins in order to control brushless motors Arduino Uno?
2
How can an Arduino-Quadcopter be stabilized?