Where is the inaccuracy of my arduino thermistor circuit coming from? 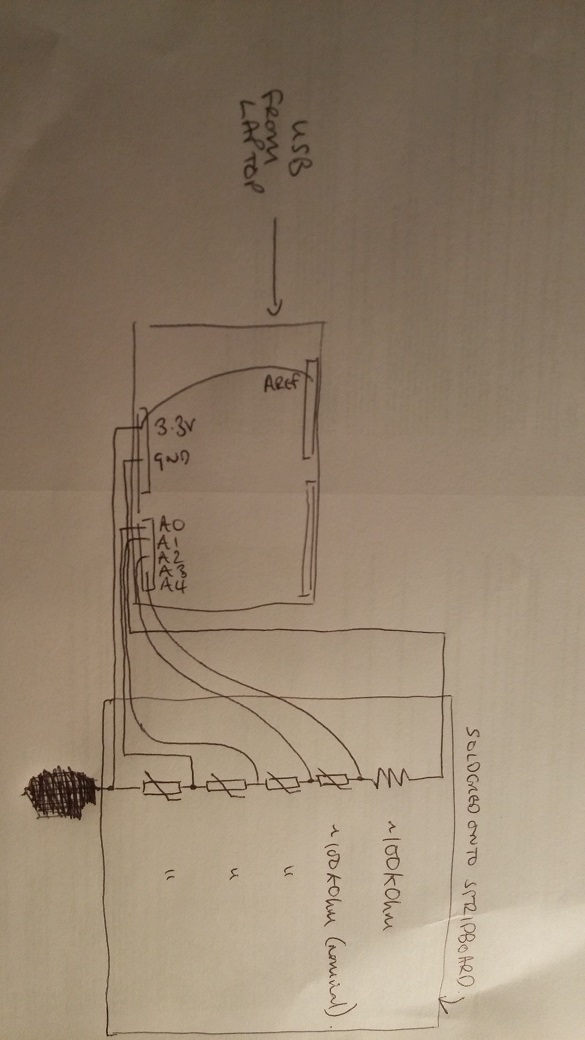 I've setup four thermistors and a known resistor in series and connected them to the 3.3V output (as I've heard it's cleaner than the 5V) of an Arduino Uno (with the 3.3V also connected to ARef to increase accuracy), with the four analog inputs testing the voltage drop across each thermistor to determine its resistance, and hence temperature.

The accuracy I come out with is around 5-10 degrees - way more than I expected. Why is this? And what can I do to get it down to less than one degree? Many thanks

UPDATE: A MASSIVE THANKYOU to all those who helped me on this, particularly @NickGammon, @Talk2 and most of all @JRobert for the brilliantly clear and simple to follow circuit instructions to follow, all of which helped to thoroughly solve my problem! The sensor works great now, many thanks!!

Why are you using the voltage divider and measuring by parts? As @nickgammon points out, you are measuring only a 1/5 of full scale at each measurement, meaning your resolution is down by 5:1 over what the A/D is capable of. Also, the divider network comes to around 500KOhms. Work out the current through that and you get a very feeble <7 microAmps. The wires are antennas that could well be contributing noise at a significant fraction of that level.

Is there a reason for the divider circuit? Could you use a single thermistor from Vcc to Gnd plus a resistor in a 2-way divider? That will have the advantages of:

Then you probably want a 2-component divider for each temperature you need to measure, paralleled between the power rails. I just guessed, not calculated, the resistances of R1, R3, R5, & R7. You'll want to estimate the maximum and minimum temperatures of interest in each channel and pick values that will give you the best ranges without drawing excessive currents when the thermistor values are low. 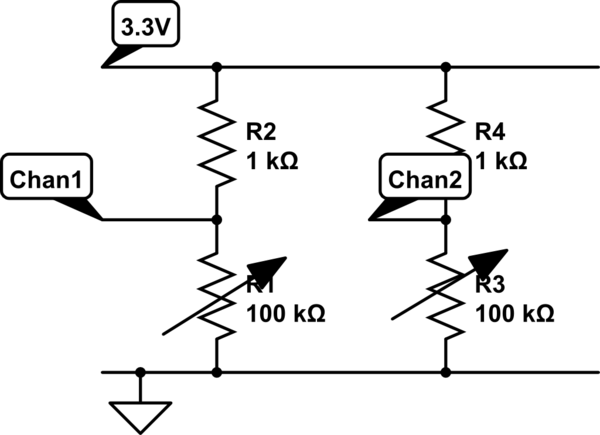 Without exactly knowing part names, models and source code is difficult to tell what to expect. But a few techniques can be used to improve the stability of an analog reading. Here a few things you might want to consider:

I may be mistaking, but what you did is a voltage divisor where you read the voltage across resistors in series (your thermistors).

Not the answer you're looking for? Browse other questions tagged arduino-uno electronics temperature-sensor or ask your own question.

8
Temperature sensors TMP36 and LM35 have temperature diff. (offset) in the same circuit
0
Why doesn't the LED turn on in this circuit?
0
Arduino circuit diagram help
0
How can I split data coming from JSON?
1
Arduino code for thermistor respiratory monitor
0
Need help with understanding the CapacitiveSensor circuit diagram
1
Is this circuit risky for an Arduino Uno?
0
Circuit to get highest reading value from multiple thermistors?
0
Where does the 5v Output power on the Arduino uno come from?