I am trying modify this setup for two push buttons https://www.arduino.cc/en/Tutorial/Button.

The code seems rather trivial

My problem is that there are several ground pins on the Arduino, but only one 5V pin, so I can't just simple double the circuits. Connecting the two circuits to different grounds but the same 5V didn't work out, although it seemed to be a good idea. How should I do this properly? To be honest, I actually would want to have three buttons, but I guess going from two to three will be trivial after going from one to two. 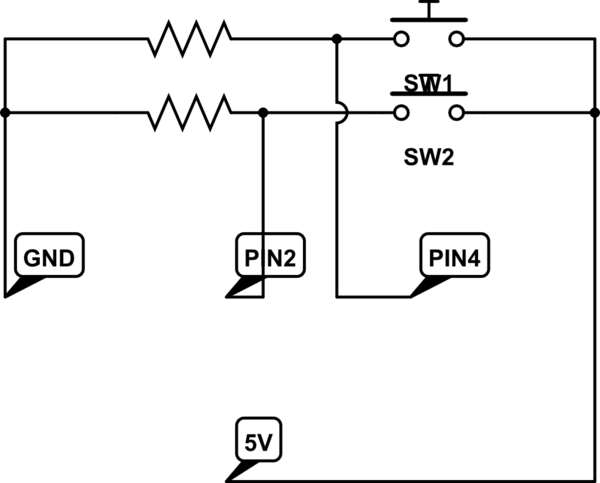 and checks this code: https://blog.adafruit.com/2009/10/20/example-code-for-multi-button-checker-with-debouncing/

2
Arduino sending keystrokes via push-buttons. Proper bouncing and manually setting buttons?
1
Where can i get touch sensitive buttons with RGB-LED like in Ableton Push
1
How can I setup a LED state change with push buttons?
0
Arduino code to control 4 led's from 4 buttons
1
Buttons, LOW vs no connection
0
Two buttons, one LCD
0
Detecting how many button presses(single tap, double tap etc) with two simultaneous buttons
0
Substitute multiple potentiometers for push buttons and single potentiometers