I was asking myself wether it's possible to power my nodemcu board (version 3) with a usb powerbank, like a smartphone, but the powerbank should then be recharged by a solar panel. So this is basically like it could look like: 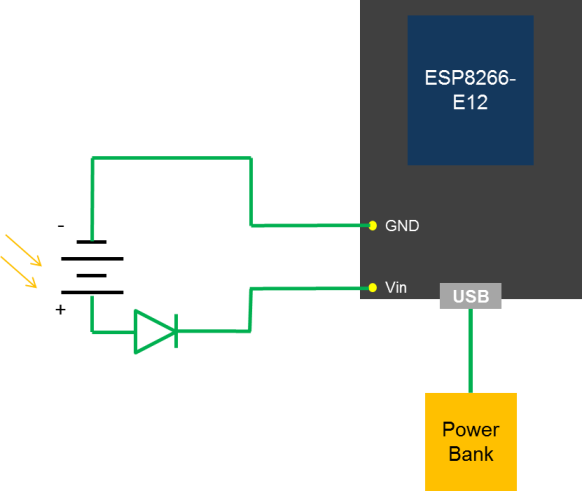 I know, there should be some charge regulation, but i would just like to know, if that circuit would be able to charge the powerbank? According to the Hardware Layout, it could be possible, but i am not definetly sure about that. Maybe you can give me some input about that.

You can not connect a solar panel just like that. There is a voltage regulator at the output of the power bank to get 5V out of the some number of Li-Ion cells and you can not charge the power bank backwards through the output. You must charge Li-Ion cells directly, that is why there is a separate input used for charging the battery pack. If you want to have a battery backup for NodeMCU you have to use a charging board and a MOSFET to switch off the battery output whenever the battery is being charged. The charger must supply enough power for both charging the battery and supplying NodeMCU.

When there isn't voltage at the charger (and NodeMCU) input, MOSFET should switch on the output from the battery and you have to use a diode (in a similar way you used it in your schematics) to prevent beckfeeding when working on battery. It should be Schottky diode with low forward voltage.

Not the answer you're looking for? Browse other questions tagged arduino-ide esp8266 nodemcu or ask your own question.