Problem: ML8511 Sensor, unable to achieve meaningful results. A mapping to the voltage output yields values that are unrealistically high. Variance is greater than expected [by me], and sensitivity, if any is questionable. In essence, the sensor reports high levels of UV whether is a dimly lit room, or exposed to daylight.

Background: The interface is simple enough, and Google Search renders numerous hits, e.g., https://learn.sparkfun.com/tutorials/ml8511-uv-sensor-hookup-guide
All coding examples I have seen are akin to the one shown by Sparkfun.

Prior experience: I have a number of other Arduino devices running my sketches that record, collect, analyse, distribute, transmit and display findings. All of these work as intended.

Observations: I have spent a lot of time trying to make sense of the behaviour i observe with the sensor output, but have been unsuccessful. I have used two different sensors [same model], and switched UNO boards. I've removed all other connections to the board, reverted to using the example code, then to code measuring only pinout values. I have also measured pin voltage via voltmeter for both the output signal and the 3.3 volt reference pin.. According to specs, the sensor outputs voltage correlate with UV levels, and calibration is achieved via a known voltage reference level.

Based on a 3.3 volt reference, the sensor should output 1 to 3 volts, which can be mapped to a UV Intensity (mW/sq cm) range of 0 to 15. My output voltages range from 2.8 to 3.2 v, the last of which is seemingly out of specs. I have also used different sample sizes that comprise a data point, but that has little effect, but since the underlying values are out of range, it really would not matter. Although cheap sensors such as this are not known for great accuracy. I find that they generally work rather well.

My supposition is that:
a) I am working with defective [abeit new] sensors.
b) This particular model of sensor functions in an atypical manner.
c) Being unexperienced in such, I an overlooking something glaringly obvious to others.
d) Somehow my perception of reality is defective.
e) I have truly entered into the Twilight Zone.

Seeking: Information that supports or refutes my observations. Ideas that I might use to further isolate/ identify the problem. A solution to the problem. 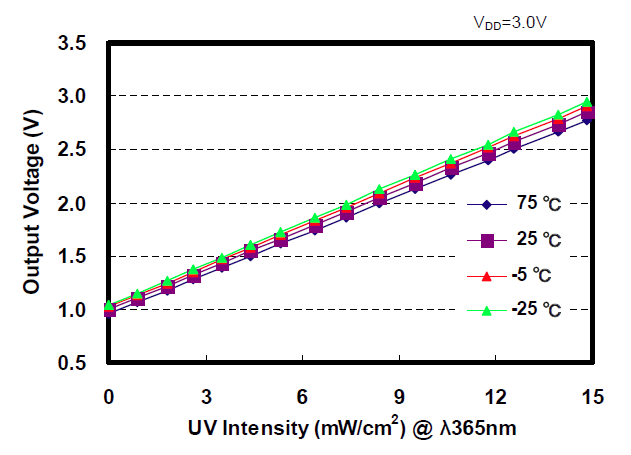 Typical ML8511 Wiring Diagram, the GYML8511 also has an additional connector for 5V, which I have tried both connected and disconnected, not understanding the board behaviour. 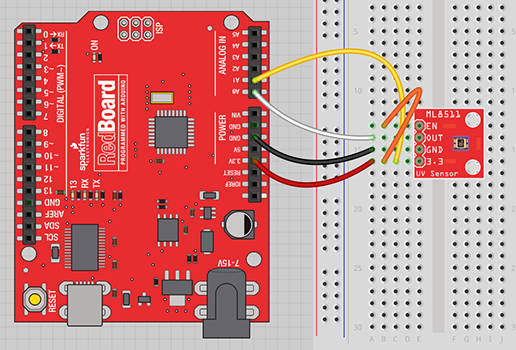 I found another, third sensor identical to mine and functioning properly. By measuring pin output, then cross swapping with one of my two "supposedly abberant" sensors, I have identified my two as being defective, i.e., the other sketch then failed to function properly with one of those so identified sensors, whilst mine now worked as it should.

I typically buy at least two of everything in an effort to isolate such problems, but if from the same batch, two may not be sufficient in some situations.

3
Input a signal from a sensor to an Arduino Due
5
Return value of 0 if value is less than zero
3
Erratic readings on Analogread with low voltages
0
Moisture sensor data will not output data to Serial Monitor?
2
How to map sensor analog output voltage
0
Voltage divider for 6 non intrusive current sensors
1
Correlated signal from two sensors in one circuit
0
Voltage divider and NodeMCU inputs
1
What are the units of output of soil moisture sensor?