I am trying to use this library to connect a Nikon lens to an Arduino. https://lainy.github.io/NikonLens/classlain_1_1t_nikon_lens.html

I'm finding it very hard to understand the correct wiring.

Connections are as follows (with Arduino Uno pin numbers):

MISO (12) is connected to the lens Data line, which must be pulled high.

drives the lens Data line through a transistor, open-collector. So: MOSI -> Base, Data -> Collector, GND -> Emitter

It uses a variant of SPI interface. I'm just finding it hard to wrap my mind around it.

It is simply a way of splitting a single-pin read/write function between two pins. It's easier to visualise with schematics: 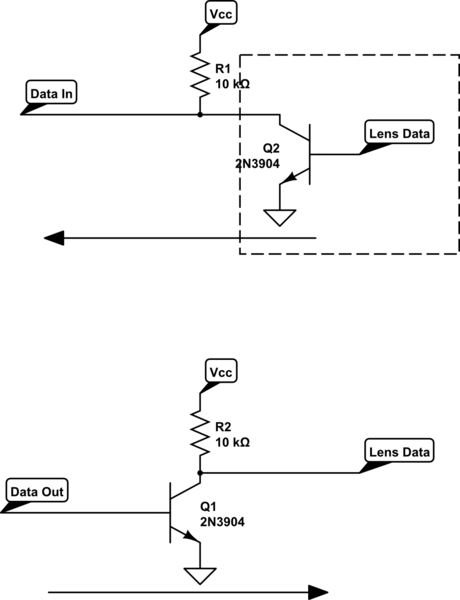 The Arduino reads that data in through the data in pin.

When the Arduino wants to transmit it does the same thing, but the "open collector" is external in the form of the transistor. It drives the transistor using the data output pin to get it to pull the data line low for a 0, or release it to be pulled up by the resistor for a 1.

This is exactly the same way (on an electrical level) that I2C works and studying that protocol can help you to understand what is going on here.

Not the answer you're looking for? Browse other questions tagged spi or ask your own question.