Using an Arduino for a Diorama Controller

Kind of new to the whole DIY electronics scene.

I'm building a diorama for my son. It will include a length of track, a station, some other buildings, and scenery. It will be HO scale. The buildings came with these cool little LED lights and I've bought additional ones as well. I want it to be of the period of the late 1800s to early 1900s. So the additional LEDs I bought give off a more "yellow" light to simulate candle/lantern light. The track is not a circuit and is not powered. It is just "static" to sit a train so it appears to be at the station.

I have the following questions:

I think this is a great opportunity to teach my kids not only modeling but also electronics (myself as well on the electronics).

Thanks in advance for any help/suggestions.

A little more about the setup. The LEDs are made specifically for this type of application (model buildings/railroads). Hence, they already have an 1800 ohm resistor attached to the input side of the LED. There will indeed be multiple LEDs per building (even per floor). I would like to at least isolate the circuits by building and even better if I could isolate them by floor. I think it would be cool to have the software cycle the buildings/floors on and off at different times.

A smaller form factor for the Arduino would be ideal as it will have to fit into one of the scale buildings. I've never really worked with the Arduino so I don't know all my options. I've done a little with the Raspberry Pi and originally posted this question there and was told the Raspberry Pi would be overkill for this type of application.

First, since you didn't mention any kind of Arduino, my answer is based on using Arduino Uno/Nano (I think its the most common)
1. Yes you can. You use 1 transistor per building as switch (if there are many LEDs in the building) to gives optimal current and prevent your Arduino pin. The value of R2 -- Rx is depend the LED colour. You can control each group with one Arduino pin. 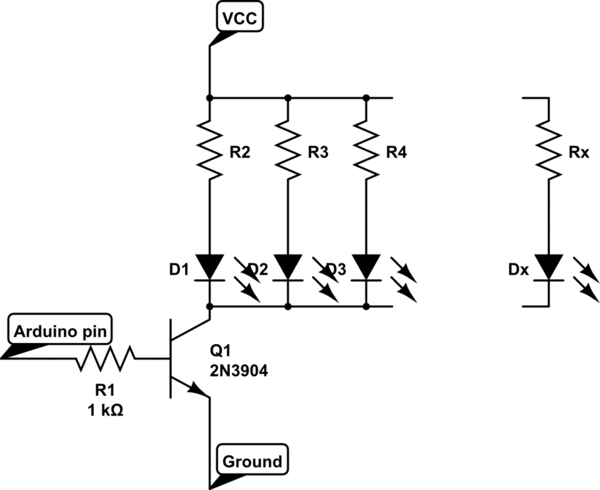 As for the form factor, I think Arduino Nano is small enough to hide in the building, while Arduino Uno size is just slightly less than a Raspberry Pi.

Good luck for your project :)

Not the answer you're looking for? Browse other questions tagged led battery audio speaker or ask your own question.