How to use breakpoints for debugging

Breakpoints are a great way to see how the compiler runs to your code. Now my question is, is there a possibility to use breakpoints when you debug your code?

As noted in Majenko's answer, the Arduino IDE doesn't provide a breakpoint mechanism but Atmel Studio does support breakpoints.[*]

However, if you have a switch and an LED, you can track the progress of your program in a way that provides some of the benefits of breakpoints. You would add a subroutine, say BPReport(), that via serial output or an LCD reports values of critical variables, then lights the LED and waits until the switch has been pressed and released, with debounce. Call your BPReport() routine whereever you want an unconditional breakpoint. For conditional breakpoints, you can have a routine BPReportIf(cond) which calls BPReport() if cond is true. If you don't want to output via serial, you might use several LEDs or an LCD, and you might use several switches if you want external break controls (for example, cond could be a test of one of the extra switches).

[*] Some hardware debuggers modify downloaded code each time breakpoints are added, changed, or removed. That usage will wear out flash memory more rapidly than just occasionally downloading to it. If a chip has been heavily used for such debugging, don't use that chip in a production system.

Though Majenko his answer is correct there are some other options.

As to the real hardware debugging as stated by majenko I would say:

An other debugging option from a completely different category is to organize your code so that decision logic (hardware independent) and action (hardware dependent ) are completely separated.

Then compile your sketch as a local program and debug the "decision logic" on your local machine. This method does not allow for "hardware debugging". This method also enables unit testing.

Note that your local machine is probably a 32 or 64 bitter and most Arduino's are 8 bitters which will result in differences in data types which is an extra attention point when using this method.

The Arduino-Debug library provides a simple on-target debugger for Arduino sketches. Debug command are added directly to the sketch. A debugger command shell is started on break-points and assertions. 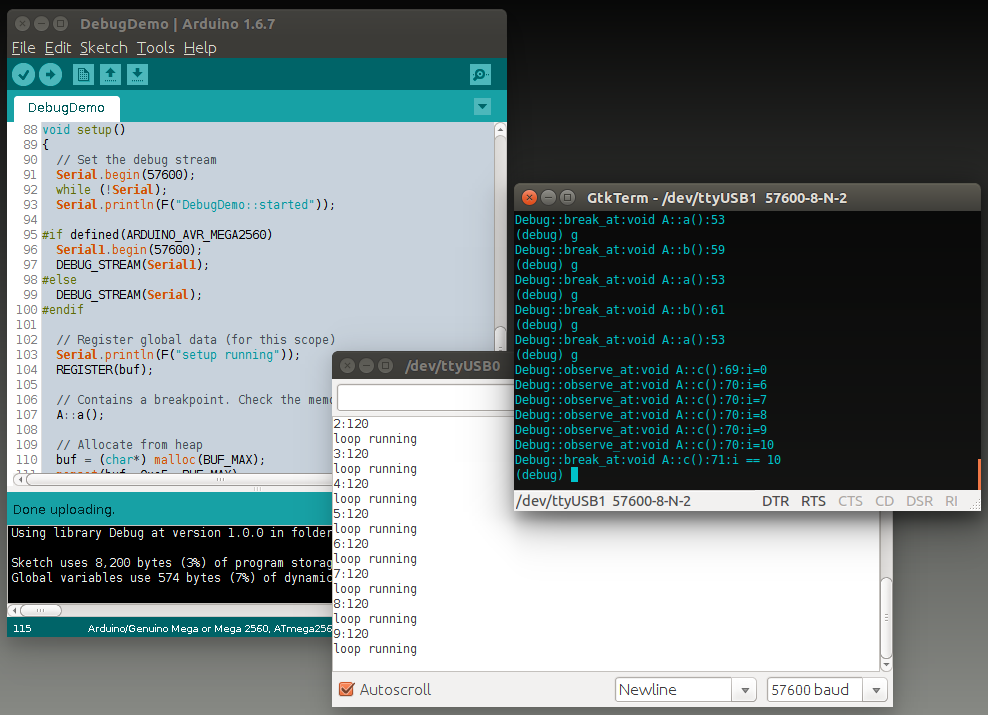 The screen-shot above shows the example sketch run on an Arduino Mega with Serial output monitor used by application and Serial1 used for the debugger shell.

Not in the Arduino IDE.

There is no provision for debugging through the UART/USB interface using the bootloader.

Not the answer you're looking for? Browse other questions tagged debugging or ask your own question.