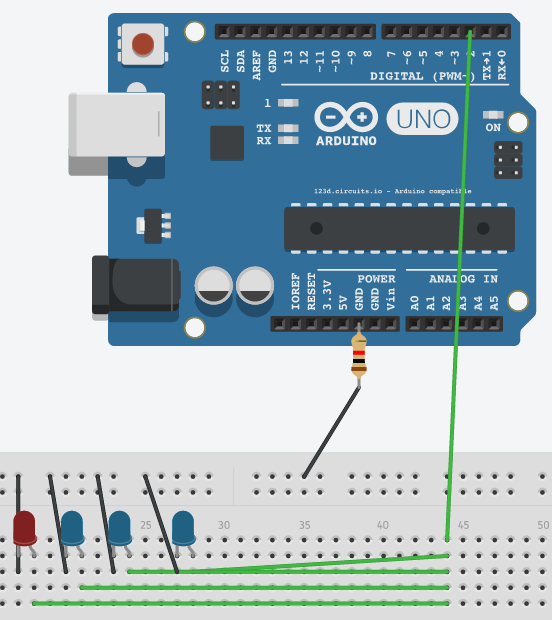 In the screenshot of a circuit I've included, I'm attempting to light up 4 LEDs off of pin 2. In circuits.io, everything works great. 3 blue LEDs and 1 red LED light up and blink as planned. When I create this same circuit on a Arduino Uno Chinese clone, IF the LEDs are all blue, they all light up and blink. If I change one of them to red, yellow, or green, ONLY the red, yellow, or green one lights up. The three blue LEDs no longer light up. It also doesn't seem to matter, where the off blue LED is put.

Not sure what's wrong.

Use one resistor per led, not one for all of them.

This is because different color leds have different forward voltages. Red requires a lower voltage to light up. So it will guzzle up all available current, while the blue leds are waiting for the voltage to go higher (which never happens).

0
Is applying 5 volts to LED dangerous?
0
Different functions using 2 buttons
1
LEDs not working with tone() function
0
What is Clock pin and Data pin, Orientation in Grove LED bar
0
AnalogWrite only working for one pin of RGB LED
0
Traffic light light system with sensors
0
RGB LEd and a push button in TinkerCAD
0
Else Statement Never Functions As Expected
1
How to change brightness of LED light?