I have a question about capacitors in DC (digital) circuits. The picture below is an edited schematic of the Arduino Uno R3.

The DTR line is connected to the reset input of the Atmega328 by a 0.1uF capacitor. 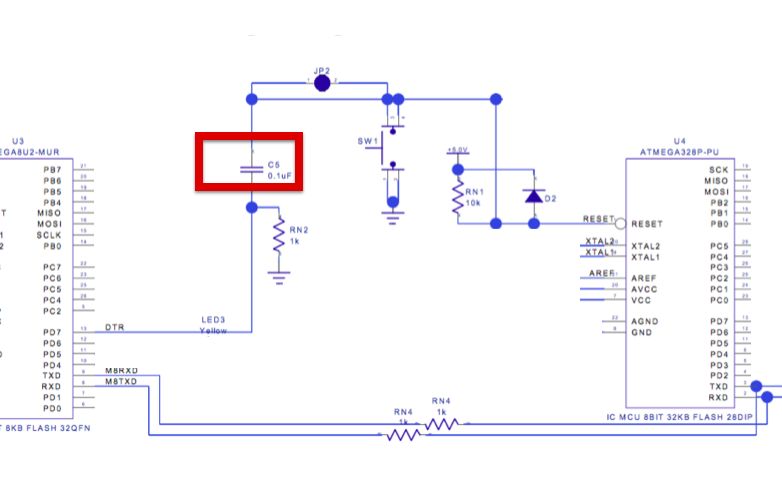 The capacitor is needed to initiate a load to the atmega flash memory through the USB -> UART. Why is this the case, everything I have been taught says "Capacitors block DC and let AC through"

All I see is something that can let AC noise through to the Arduino reset? I know its needed, I tested it. But why its needed, how it fulfils that function I have no idea.

The Atmel datasheet, page 305, Section 29.5 "System and Reset Characteristics" provides some useful information for the reset pulse. It says that the worst-case minimum pulse width is \$2.5\:\mu\textrm{s}\$. It then goes on to say that the ramp rate has to be contained between two boundaries; no faster than \$10\:\frac{\textrm{kV}}{\textrm{s}}\$, but also no slower than \$10\:\frac{\textrm{V}}{\textrm{s}}\$. So there are some restrictions that should be managed by any reset system.

There are some nice reset circuit ICs available which provide a manual reset input as well as a control line. I'd probably use one of those about a circuit I cared about. Okay. Actually, I'd make my own out of a PIC10LF320 in a SOT-23-6, which also includes a brown-out circuit of its own, which I'd probably also re-purpose, as well.

But let's look at this circuit. DTR is normally held HIGH (I believe) and is pulled LOW in order to initiate a reset. Assuming that the two MCUs are running on different power rails (or the same, doesn't matter), \$C_5\$ is charged up to the difference between the ATmega328's rail (via \$RN_1\$ and the DTR output line's HIGH value.) If there is no difference, the voltage will be nearly zero. But if the rails are different, then there will be a small voltage across \$C_5\$ that represents this difference.

When DTR is pulled LOW, that end of \$C_5\$ is also pulled down to that voltage (close to ground.) For the first moments, this also means that the other side of \$C_5\$ is similarly pulled downwards, too. If there was some voltage rail difference, then that's the voltage that appears at the reset pin of the ATmega328. Depending on the voltage differences between the MCUs and the reset pin requirements of the ATmega328, this could be a problem. The datasheet says that it may be required to be as low as \$600\:\textrm{mV}\$, though the typical only requires to be pulled down to \$1.3\:\textrm{V}\$. But if no difference in the rails, then hopefully near-ground appears at the reset pin of the ATmega328. I'm going to assume there is no difference, here, so that we at least have a good chance it works okay.

Now, let's go the other direction. Let's say that now DTR is held LOW for a long enough time that it charges up to about \$5\:\textrm{V}\$ through \$RN_1\$. Now, DTR is driven HIGH. What happens? Well, the other side of \$C_5\$ will now be at about \$10\:\textrm{V}\$ (the \$5\:\textrm{V}\$ charge on \$C_5\$ added to the DTR HIGH voltage value.) This is rapidly discharged, safely, via \$D_2\$. That's why \$D_2\$ was added. Otherwise, this voltage would be presented to the RESET pin of the ATmega328 and would have to be discharged via any internal protection diodes present there (which may themselves have additional specifications that must be met.)

What's interesting here is that the RESET pin in particular is called out in the datasheet on page 299. It says that it can support up to \$13\:\textrm{V}\$ worst case. So, technically, that might mean that \$D_2\$ isn't necessary to avoid driving protection diodes in the CPU. But it is still a good idea for an entirely different reason. This is to discharge \$C_5\$ rapidly (it would be very slow, via \$RN_1\$), so that it can be used for another reset very soon after being used.

Note on the reset pin:

I can't readily find a specific programming document on the details of using this mode to program their devices. Microchip publishes them. But it appears, cursory examination only, that Atmel does not. They document how to use the mode with their tools, such as the STK500 (which I have.) But not how to design your own tool. I'm guessing, for now, that this is a matter of non-disclosure for Atmel. And given that they have it available for so many different devices, I can see why they might want to avoid having to support it.

The details on this pin are starting to get complicated-sounding. But pins cost money and silicon is cheap. So Atmel, like other companies, try to come up with methods to use their scarce pins to provide as much versatility as they can to sell devices.

You can use this online calculator to see the time-constant for any given resistor and capacitor: http://www.referencedesigner.com/rfcal/cal_05.php

It is not clear exactly what is happening between the U3 DTR pin and the junction of C5/RN2. There is a label that says "LED3 Yellow", but there is no symbol for a LED or any other component there. But there is typically a way for an external device to apply a reset also, so that you can re-program the microcontroller, and that is likely what is happening there.

Not the answer you're looking for? Browse other questions tagged usb uart ftdi or ask your own question.

2
atmega328p on breadboard using ftdi to upload sketches @8mhz 3.3v
1
How to reset Arduino Uno over BLE just like over USB?