Does the Arduino Uno have two crystals?

Take a look at this picture: 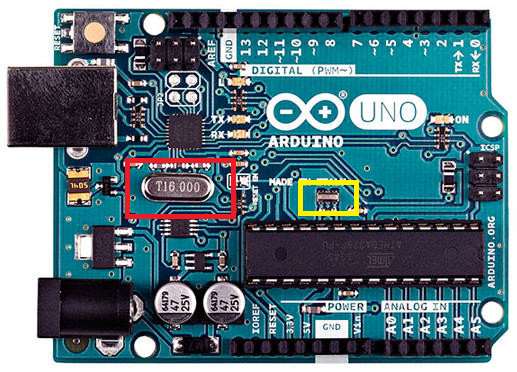 I think most of use agree that the "big silvery" thing on the board (red) is the famous 16 MHz crystal of the Arduino. That's what I've believed until very recently.

I was bored so I looked at my Arduino Uno, and saw that it has what seems like another crystal (yellow). It looks like the one that is on the Pro Mini. It's also located near the XTAL pins. After I inspected the schematic a second time, it also appears that there are two crystals on the board.

Which one out of those two is actually connected to the XTAL pins and why are there two?

There are 2 that you can see, but there are internal resonators in both chips. You can use the ATMega328's one if it's on a breadboard (it's half the frequency tho), and much more temperature-dependent. Just need to give it a fresh bootloader.

Not the answer you're looking for? Browse other questions tagged arduino-uno oscillator-clock or ask your own question.

6
Is it possible to generate an exact 15 kHz clock pulse using an Arduino?
18
What's the 2nd ICSP header for in Arduino Uno R3?
5
Replacement crystal on Uno for cold temperatures
1
Using an Arduino as a crystal oscillator
1
Arduino Uno with crystal